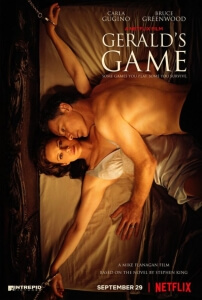 BASICALLY…: A harmless sex game between a married couple (Gugino and Greenwood) suddenly turns into an intense battle for survival…

The mess that was The Dark Tower aside, Stephen King adaptations have had a rather strong year in terms of quality. Not only has It become a massive success both with critics and audiences, but there are not one but two Netflix original films on their way that take a couple of King’s stories and give them some serious lasting power in film format. But while 1922 – which begins streaming via the service later this month, so keep an eye out for a preview and review of that one – has some promise of its own, it has a long way to beat the eye-widening and psychologically warped experience that is Gerald’s Game.

Based on King’s 1992 novel of the same name, the film opens with a couple, Jessie (Carla Gugino) and Gerald (Bruce Greenwood), arriving at a remote getaway lodge where they plan to spend a romantic weekend together. They kick off their weekend with a kinky sex game that involves Jessie being handcuffed to both sides of the bed while Gerald innocently has his way with her, but that goes south fast when Gerald suffers a fatal heart attack and collapses onto the floor, splitting his head open. Left tightly cuffed to the bed, Jessie must now find a way to escape her bondage before she dies of thirst or starvation, or even the stray dog that has begun gnawing at Gerald’s corpse. Funnily enough, that’s where things suddenly get much weirder, but I’ll leave it at that for now.

Director Mike Flanagan, who has been winning over horror audiences lately with his highly acclaimed movies Oculus and Ouija: Origin of Evil – the latter being particularly impressive because it was a sequel to a widely-hated horror movie – is at his A-game here, delving far deeper into character-based horror and drama than he has done previously, and in doing so making a film that uses tense cinematography and editing to tell this increasingly disturbing story of a woman caught in this pretty messy situation, and how everything in her life up to this point has been leading to this very moment. It’s a character study first and foremost, one that happens to incorporate horror elements into it, but doesn’t rely too much on old tropes like jump-scares or loud stinger music to get by. The horror comes from the situation, which is pretty gruesome for anyone to be in, as well as the psychological mind games that Jessie is playing on herself while she’s trapped and with nobody apparently there to help her out.

It is these mind games, which are very dialogue-heavy and use some rather tricky camera work to make possible – you’ll know what I’m referring to when you see it – that help the movie shine, and luckily they’re the majority of the film. It allows us to dive much deeper into Jessie’s psyche as she imagines scenario after scenario playing out before actually making a decision on something, and it’s like watching an episode of Sherlock in the sense that you really get to see how her brain is working in this tense situation. You also get to see how seriously messed up her past was, which help explain why she is the person that she is in the present, but are also far creepier when played out than a majority of the sub-par horror movies released theatrically this year. Carrying all of this throughout is Gugino who truly astonishes despite her physical limitations, what with being handcuffed to a bed and all for the majority of it, as she really makes you feel the absolute anguish and peril that this woman is going through, and the raw desperation she experiences as she wants more and more to escape her bonds and get the hell out of there.

It’s also probably the goriest movie that Flanagan has yet directed, since not only do you see that stray dog go to town on Gerald’s corpse like it was a giant lump of fresh meat (which, in fairness, it is) but via some pretty effective make-up and effects, other body parts – and not necessarily Gerald’s – get slashed and ripped to pieces as well. It’s what helps make Gerald’s Game a genuinely effective horror film, and a neat alternative to those who weren’t exactly taken with It in the cinemas and actually want something scary to happen in a Stephen King adaptation. It may put some people off, especially as the film gets more and more violent, or just so disturbing and legitimately terrifying in parts that it can be hard to watch (in a good way), but stick with it and Gerald’s Game is one that you’ll certainly be wanting to play over and over again.

Gerald’s Game is an effective psychological thriller that will please Stephen King fans for its deep character studies and intelligent storytelling, as well as horror fans for its genuinely terrifying imagery thanks to a director who is at his A-game as well as a stellar and captivating lead performance by Carla Gugino.