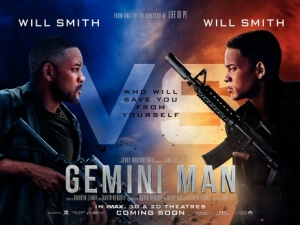 BASICALLY…: Aged assassin Henry (Smith) finds himself going up against a younger clone of himself (also Smith)…

On paper, a movie like Gemini Man should have been an easy win. It’s got one of the biggest movie stars on the planet going up against a younger version of himself, brought to life through state-of-the-art visual effects, under the direction of a two-time Oscar winning visionary filmmaker, and from a script co-written by one of the showrunners from one of the biggest television series of all time.

Yet, for all its attributes, Gemini Man is still a lame duck.

A plodding action thriller with a stale story, thin characters and some questionable dialogue, the film has been in development hell for over twenty years, going through several directors like Tony Scott and Joe Carnahan, and at one point attracting stars including Harrison Ford, Nicolas Cage, Arnold Schwarzenegger and Sylvester Stallone, before finally getting off the ground with star Will Smith, director Ang Lee, and a script draft credited to Game of Thrones showrunner David Benioff. Many of the excuses as to why the movie never took off back then was because the technology simply wasn’t there to make a digitally younger version of the lead actor, but perhaps the real reason is that maybe the movie just wasn’t worth their time in the first place.

Smith stars as Henry Brogan, an aging assassin who, after a successful kill on a moving train, finally decides to hang it up for good. However, Henry’s associates decide that he knows too much about several things, and decide to have him terminated; in the process, government agent Clay Varris (Clive Owen) sends a young asset, Junior (also Smith via digital de-aging technology) to finish Henry off. As it turns out, Junior is Henry’s clone, designed and trained to lack any of the emotional compromises that Henry naturally has, and along with fellow agents Danny (Mary Elizabeth Winstead) and Baron (Benedict Wong) Henry must try to convince his younger self not to follow the same path that he once did.

The last time that Ang Lee made a disappointing turn into full-on action movie territory, we got the much-maligned 2003 version of Hulk. With that film, audiences just didn’t want to see a quieter and more meditative piece about a big green monster that smashes things, and I suspect not many people will be wanting something similar in a film where Will Smith fights a younger version of himself, which there is surprisingly (but also unsurprisingly) very little of in this film. Everything feels very muted here, from the action sequences which don’t really come to life, to some of the performances which feel rather pedestrian in a film that should be as over-the-top and ridiculous as its plot suggests. Lee’s more respectful approach to an action movie is interesting, but fails to make any of the action feel particularly exciting or even that ambitious, and you’re just left watching this bland movie with a script filled with clichés and wafer-thin characters who aren’t worth getting too invested in, which has been brought to life in the least exciting way possible.

It should also be mentioned that I saw this movie in the much-advertised “3D+”, which is kind of like what Peter Jackson did with the Hobbit trilogy and shot in a higher frame rate than the standard 24 frames per second (in the case of Gemini Man, it was shown in 60fps). The method has its strengths, but also its weaknesses; on the one hand, it’s cool to see filmmakers like Ang Lee try and push the envelope with how a feature film can be shot and shown, but on the other hand it makes everything look like an action-packed episode of EastEnders, with television-like framing that highlights some of the more questionable effects, from props which can sometimes look like just that, to times when the digital de-aging looks very off. There are times when the effects work is stunning, as it does actually look like Fresh Prince of Bel Air-era Will Smith is right there on the screen with his older self, but also times when it’s clear that the process has not been perfected yet, and the higher frame rate only makes those slip-ups all the more glaring and unnatural.

It is definitely one of those movies where the filmmakers were way more concerned about it looking shiny and clean without much thought about tidying this script, which makes the streamlined and almost lifeless direction feel even more empty and hollow. Throughout, there’s no good reason to care about Smith’s character except for the fact that he’s played by Will Smith, and the charismatic movie star can’t even seem to inject some of his own life into the movie, with his lines being delivered as unenthusiastically as they were in M. Night Shyamalan’s After Earth. It’s a bland performance – in fact, it’s TWO bland performances for the price of one – from an actor who’s been left out to dry by a script that’s doing him no favours, giving him some very portentous lines to spout out and not even a solid one-liner to close a scene with.

A lack of interest from the star, the director and the writers ultimately make Gemini Man a slog of a moviegoing experience; you always have the feeling that this could have been something special if all of those elements were tightened up, but it’s a disappointing misfire that will most likely leave you feeling bored than properly entertained – and that’s from a film that gives you two Will Smiths for the price of one.

Gemini Man fails to make good use of its silly but intriguing premise, with lifeless direction by Ang Lee and bland performances from charismatic actors like Will Smith – appearing on-screen twice thanks to some strong but imperfected effects work – not being able to even make its cliched and stale script seem worthwhile.

Want to decide what the movie’s like for yourself?
Check out Gemini Man showtimes in London
via