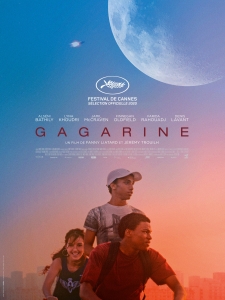 BASICALLY…: A young man (Bathily) fights to save his rundown Paris tower block from demolition…

This review of Gagarine was conducted as part of the Dublin Film Festival 2021.

The Gagarine of the title refers to both the now-demolished Parisian housing project, and pioneering Soviet cosmonaut Yuri Gagarin who both attended the opening ceremony in 1963 and had it named after him. Mixed together, these two unlikely ingredients now form a sweet and grounded piece of magical realism from debut filmmakers Fanny Liatard and Jérémy Trouilh, which approaches some rough topics like isolation and community with some highly imaginative storytelling that remains compelling throughout.

In the film, set around the rundown Gagarine estate, we meet a young man named Yuri (Alseni Bathily) – named after the very person the block was dedicated to – who has been left to fend for himself after his mother pretty much abandons him in their low-income flat. We quickly learn that Yuri is enthusiastic about two things: his community of fellow Gagarine residents who he helps out on many occasions (including crafting and raising a special shelter so that people can witness an eclipse through), and his fascination with space travel, which is much more akin to his namesake. However, the future of Gagarine is cut short when it is lined up for demolition due to its dire and unsafe living conditions, forcing all the residents to abandon ship – except for Yuri, who not only decides to remain along with a small number of other residents, including his Romani crush Diana (Lyna Khoudri) and local drug dealer Dali (Finnegan Oldfield), but using his high skills in engineering to develop a very special new way of living which, let’s just say, puts Matt Damon’s character in The Martian to shame.

With the spliced-in archive footage of actual Yuri Gagarin breaking ground in front of hundreds of well-wishers, the stark contrast to how this housing project has aged more than 50 years later is extremely apparent; the hallways are cracked and rat-infested, graffiti is lined up all along the outside exterior, and electricity from hall lighting to elevators are in alarmingly short supply. Yet, our hero Yuri’s determination to both save his community from crumbling into nothing and achieve his dream of becoming a full-on cosmonaut – both of which, heartbreakingly, he is too powerless and financially crippled to realistically accomplish – is rarely drained. If anything, it makes him even more resolved to save both things, because it really is all that he has left in the grand scheme of things, and how directors and writers Liatard and Trouilh (along with co-writer Benjamin Charbit) manage to convey his rather tragic journey, through some carefully executed cinematography and editing, as well as a clear blend of fantasy and reality, is both endearing and at times, indeed, magical.

While the central themes of isolation, working-class communities and wishful dreaming are often not the most uplifting to witness – which, in some aspects, make it an interesting double-feature with Ladj Ly’s Oscar-nominated Les Misérables, which shares similar themes and equally dark explorations of the rural, ethnic Parisian suburbs – Liatard and Trouilh, along with an impressive lead performance by debuting young actor Alseni Bathily, give them a sparkly and feasible new sense of life without ignoring some of the bleaker undertones. There’s something really nice about seeing this young man, so consumed with his passion for both his community and his dream, taking great measures in order to cling onto them despite the dire circumstances. By the end, you’ll be emotionally devastated by how fantasy and reality come together for its bit gut-punch of a finale, because not only are you completely on board with this character’s fable-like journey, but thanks to the writing and directorial style which effortlessly switches from one reality to the next, you’re also fully engaged with how these filmmakers are telling their story as though it’s a mythical tale for parents to tell their children as they fall asleep (though perhaps they’ll skip some of the darker parts).

It’s a rather lovely and sweet coming-of-age tale that’s filled with hope and healthy optimism, and a fascinating display of magical realism that lets the filmmakers indulge in their creative storytelling without going too far out of their ideal orbit. From its mature yet fantastical approaches to hard-hitting topics, to the performances and overall style and direction, Gagarine proves that even though its feet are firmly planted in the ground, it has the capability to – much like the cosmonaut it’s named after – soar right into the stratosphere, and possibly beyond.

Gagarine is a lovely and sweet coming-of-age drama with a healthy dosage of magical realism, conveying some of its heavy themes such as isolation and working-class communities with fantastical displays of hope and optimism, while also leaving the audience with an emotional gut-punch come the powerful ending.

Gagarine currently does not have a UK release date. In the meantime, click here to keep an eye on the official Film Distributors’ Association schedule for any updates regarding a future UK theatrical release.