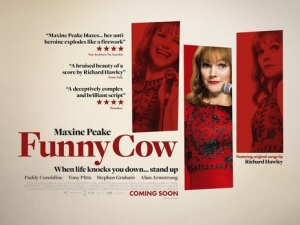 BASICALLY…: A female comedian (Peake) struggles to make a name for herself in a male-dominated stand-up industry across the North of England…

Comedy is, in one way or another, based almost entirely on misery. In slapstick, for example, the humour comes from the fact that the person is harmed in an over-the-top and ridiculous manner; it may not be funny for them, but it sure as hell is for the rest of us. The stand-up method of comedy is similar, as comedians regularly poke fun at everyday occurrences, people in the public eye, or even how their own lives are lowly and depressing enough to turn into a barrel of laughs.

The interesting thing about Funny Cow is that, while it is a film about a person on the comedy circuit, the misery intentionally overpowers the comedy, and it slowly reveals itself to be anything but funny. That’s not a knock against the film, which is quite a fascinating character piece anchored by a mesmerising lead performance, but do not under any circumstances go into this film expecting a laugh riot, because you’ll likely come out more miserable than you were going in.

It stars Maxine Peake as an unnamed woman during the 70s and 80s – referred to only as Funny Cow in certain parts – who doesn’t have the most appealing life. Growing up in Yorkshire, her mother (Lindsey Coulson) was a hardcore alcoholic, her father (Stephen Graham) was severely abusive, and her brother (also Graham as an adult) barely wants anything to do with her. In adulthood, she settles in to a new life with lover Bob (Tony Pitts, also the film’s writer), who turns out to be just as bullish and abusive as her father, and later takes a shining to educated and cultured bookshop owner Angus (Paddy Considine). Throughout all of this hardship, she retains a strong sense of humour, and inspired by an underwhelming performance by aging comedian Lenny (Alun Armstrong), she decides to give this whole stand-up thing a try, despite constant warnings that the circuit is not designed for women to do.

This is less of an underdog story about this female comedian, and more of a brutal and often disturbing journey she undertakes to overcome such hardships in her life, and rise above it with her sense of humour intact. The character of Funny Cow, whose real name we are never privy to, endures a lifetime of abuse first from her father and then later her husband, and it warps her reality so much that she at one point declares her version of love to be where she’s constantly yelled at. On top of that, when she decides to pursue a career in stand-up she’s met with instant denials simply because she is a woman, and people instantly assume she is either a singer or a stripper. It’s not the sort of material anyone can really shape into something funny, and the film knows that; when we do finally get to see her full act – outside of a couple of inconsistent and disjointed wraparound segments – it’s no different to the type of one-liners and insults her peers use repeatedly, and in said segments when she does bring up her rough childhood it’s met with awkward silence. Make no mistake, this is strictly a stern character drama that just happens to be about someone in a profession designed to make people laugh, and the film wisely never uses any of its difficult subject matter as a punchline and treats it with the serious weight that it deserves.

It can be very difficult to watch at times, but the incredible and fearless lead performance by Maxine Peake is what keeps it from becoming a fully depressing watch. Peake commands every scene she’s in with a huge amount of pathos and empathy, allowing us access to the troubled mind of her character but also not entirely sympathise with her when she makes decisions some would consider to be rather rotten. Throughout the film, her character is trying to find her place in this nasty and unforgiving world, and her rough voyage of self-discovery leads the actress to some very dark places to get the appropriate response, and she has never been better as a result. She is truly on top form in this film, and you’d be hard-pressed to find a better performance she has yet given than here.

Just remember, don’t go into this expecting a comedy – chances are you’ll be sadder than you were going in.

Funny Cow is a dark, gritty and occasionally hard to watch character study about someone who wants to make people laugh, but the humour is thankfully secondary to some intense and emotional scenes that really bring the best out of its lead actress.