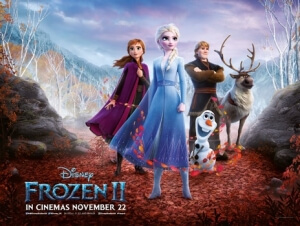 BASICALLY…: Elsa (Menzel), Anna (Bell) and their friends head out on a journey to uncover the origins of Elsa’s powers…

In some ways, Frozen 2 is a victim of its own success. The enormous popularity of the first film is unlike anything that even Disney has experienced before, with everything from the characters to the animation to especially the soundtrack becoming so beloved by audiences worldwide that the pressure on the filmmakers to make a sequel that lives up to its predecessor is so strong that it could all go wrong with one easy stroke.

Thankfully, it hasn’t. The long-awaited sequel is a gorgeous family treat, which expands greatly on the characters we grew to love from the first film, and offers a grander scale that not even some of Disney’s other animated classics could afford to give. It is also, in a blow to anyone who’s just gotten “Let It Go” out of their heads, filled with many new catchy songs you’ll be humming to long after you first hear them.

Taking place a few years after the events of the first film, all seems right in the kingdom of Arendelle. Queen Elsa (Idina Menzel) has learned to control her powers, and lives comfortably in the palace with her younger sister Anna (Kristen Bell), Anna’s boyfriend Kristoff (Jonathan Groff), Kristoff’s reindeer Sven, and of course the walking talking snowman Olaf (Josh Gad). However, when Elsa starts hearing a mysterious voice out in the wilderness, they must all venture towards its source to find answers if they are to save the kingdom from a new threat.

In terms of story, it does admittedly play things a little safe. It’s not entirely devoid of heavy drama or mature themes, but you’d expect a follow-up to one of the most beloved animated films of the last decade to perhaps raise the stakes a little higher, at least on a storytelling level. For what it is, though, the story is perfectly serviceable; it’s not too complicated for a younger audience and it’s not too childish for older viewers either, it’s a fair balance of pure family entertainment and also a nice expansion on themes and characters that had been previously introduced.

What it perhaps lacks in a truly worthy plot, it makes up for in several other areas, such as a gorgeous palette of landscapes that the animation team seems to have had great fun in creating with so many autumnal colours at their disposal. This is a beautiful-looking movie, with so many orange and red-tinted trees and leaves that seem to have come straight off of a painter’s canvas, and close-up shots of water drops, ice and entire oceans looking extraordinarily photorealistic. They help create a much more expansive and even magical world than what we saw in the first film, one that’s as pleasing to the eye as it is wondrous and completely entrancing for the imagination, with a slightly more epic nature that at times feels like a journey into Middle-Earth (this movie even has giant rock monsters, not unlike the ones from that one scene in the first Hobbit movie).

Many of the characters return to the forefront, and are just as delightful as when we last saw them (and yes, that includes the couple of shorts made and released between the two films). Elsa and Anna’s sisterly relationship remains the true heart of the story, warm enough to melt even the biggest cynic’s icy interiors, and both Menzel and Bell respectively find new ways to make their characters grow without sacrificing what made them such strong characters in the first place. Amazingly, Olaf the snowman hasn’t managed to completely annoy me just yet, with not only Josh Gad’s comedic timing still on point – he naturally gets some of the film’s biggest laughs, including a quick recap of events from the first Frozen – but also his delivery in some of the lines feeling genuinely loving and not too obnoxious. Some of the newer characters don’t leave quite as big a mark as the more familiar ones, but that perhaps is a testament to how much these characters continue to remain so loveable even in completely new circumstances.

And then, there’s the soundtrack. Brace yourselves, parents, for your kids are going to drive you bonkers once more with a whole new set of earworms to crawl deep inside your mind, making you want to curse out the song-writing duo of Kristen Anderson-Lopez and Robert Lopez until your dying days. I can tell you that, mere days after seeing the movie, at least one of the new songs has gotten lodged in my head, and I have been unashamedly been humming it ever since; you’ll know which one it is when you hear it, and you’ll also know why. There’s a lot of strong medleys on display here – even Jonathan Groff’s Kristoff gets more of a chance to sing this time, as he gets a pretty great rock ballad to croon, complete with back-up reindeer singers – all of which are written, produced and performed to movie musical perfection. Not all of them have the instant-classic quality as “Do You Wanna Build A Snowman?” or “Let It Go”, but don’t be surprised if at least one of these new ones is up for this year’s Best Original Song Oscar, or even nabs it.

For a sequel to an incredibly popular movie, Frozen 2 is about as good a follow-up as we could have hoped for, one that’s just as good as the first film with enough strong qualities to make it a solid family hit – but again, commiserations to each and every person who’s just gotten “Let It Go” out of their heads. For you, the real challenge is about to begin.

Frozen 2 retains much of the first film’s heart and soul with a solid sequel that’s just as good as its predecessor, with an expansive scale, gorgeous animation, loveable characters, and a strong soundtrack that’s bound to get stuck in your head long after you see it (sorry, anyone who’s just gotten “Let It Go” out of their heads!).

Want to decide what the movie’s like for yourself?
Check out Frozen 2 showtimes in London
via