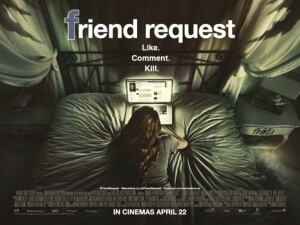 BASICALLY…: Popular college student Laura (Debnam-Carey) and her friends are plagued by the ghost of a student who committed suicide after Laura unfriended her on Facebook…

Last year saw the release of Unfriended, a way-better-than-anyone-was-probably-expecting horror film that blended the elements of a traditional horror film with the rising issue of social media overreliance with young people, and managed to do it in a way that was both creative and even insightful. It was even one of the few times we actually felt the found-footage angle truly worked for the overall narrative, with everything taking place on a Skype chat meaning that it was more grounded and even believable, but more importantly it was an enjoyable and fairly satisfying horror movie that truly highlighted the growing presence of Facebook, Twitter et al in all our lives.

So much so, in fact, that when another film like Friend Request comes along and tries to do the same thing only to fail miserably not just as a sly commentary but also as a horror film, even Unfriended’s harshest critics will look back on it with fond memories by comparison.

Taking a far more traditional approach, this one tells the story of college student Laura (Alycia Debnam-Carey) and her many friends, both in real life and on Facebook (when we first meet her, they are north of 800), all of whom are threatened once she friends and then unfriends the weird and obsessive goth teen Marina (Liesl Ahlers) who, upon committing suicide after the fact, somehow starts possessing Laura’s Facebook account and later her actual friends, all with the intent on making her feel as lonely as she was.

What really makes this one pale heavily next to something like Unfriended is its handling of the overall message about the potential dangers of social media; whereas in that film it was a little more subtle and even thought-provoking in how the characters’ online lives were slowly being ruined in many ways by the mysterious entity that was haunting them, here there doesn’t even seem to be an understanding of the word “subtle”. It’s made clear very early on in several speeches about how everyone seems to have an addiction to the Internet – Laura is even assigned a case study on that very subject – and how much it sucks for anyone to put their whole lives on the World Wide Web, forcing it down our collective throats with all the intelligence and sophistication of a Neanderthal with learning difficulties. You can sense that there’s an idea behind all this, but it’s handled so sloppily and without much cohesion that it falls flat on its face(book).

Even as a horror film, this movie doesn’t work; there’s far too much of a supernatural element that we’ve seen done so many times before, and done much better, threatening to get in the way of the timely themes it wants to convey; the main characters are pretty much stock horror movie characters so there’s not much worth in trying to become invested in them whatsoever; and it relies way too damn much on those bloomin’ jump scare tactics instead of building towards something much scarier (one of the first instances of that in this movie is an actual “screamer” video; that’s how little they seem to be trying).

Worst of all, however, is the very ending which, aside from not making a lick of sense anyway, seems to give the message that unless you are constantly online, you are a repulsive individual who will lead a lonely life with nobody by your side in the real world –not only does that contradict everything the film seemed to have building towards from the very beginning, but it only encourages rather than discourages anti-social behaviour where you put your whole life onto the Internet instead of actually being human and interacting with people in real life, like you should. Yes, things like Facebook do help us connect with people all around the world, but it shouldn’t be the ONLY thing you should use to connect with people; you should also use your natural human instincts to go outside and meet up with people instead of meeting them in front of your laptop or your phone, something this film for whatever reason seems to be wholly against.

For that, and countless other reasons, Friend Request earns from us a solid “dislike” (or that angry alternative to the like button that’s on there now, whichever one takes your fancy).

Friend Request wants to convey a timely horror movie about the rising issue of social media overreliance, not unlike last year’s far better attempt Unfriended, but the message here is unsubtly forced down our throats amidst an unimpressive horror film template, with an ending that not only makes no sense but also contradicts its own attempt at social commentary and even insultingly discourages true human connection. Dislike.