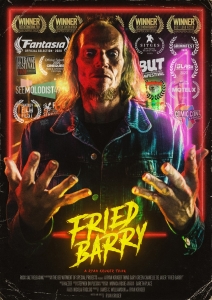 BASICALLY…: An alien possesses the body of a disgruntled drug addict (Green), and takes it out for a spin across town…

In most movies about alien possessions, it’s usually a somewhat naïve but good-natured human who’s taken over by an extra-terrestrial being, which ends up changing the human’s life for better or worse. However, in Ryan Kruger’s “thing” – and that’s not a slur, it actually labels itself as that right at the start of the movie – Fried Barry, the person whose body the alien has inhabited just happens to be one of the worst possible people in the worst possible part of the world, which is one of the many ways in which Kruger subverts expectations and gives a vaguely familiar plot a style and substance that is (for lack of a better phrase) out of this world.

Taking place across Cape Town in South Africa, we are first introduced to Barry (Gary Green) as he’s wandering the streets after yet another heroin binge. We quickly see that his wasteful days are being spent neglecting his long-suffering wife Suz (Chanelle de Jager) and their young child, and instead opting for trips to the local pub and injecting even more heroin into his body. However, everything changes when Barry is suddenly beamed onto an alien spacecraft, where Barry’s soul is replaced by that of a curious sci-fi creature and begins roaming about the city in his body. Almost immediately, though, “Barry” experiences the seedy underground lifestyle of Cape Town, being exposed to several drugs and sexual partners, while also finding himself in several situations which the word “bizarre” really isn’t accurate enough to describe them.

Kruger’s Fried Barry started life as a short film that the filmmaker made in 2017, and seeing what the extended version now looks like, one can only imagine what kind of madness he was able to cram into a much shorter running time. The feature is a massively wild ride, and definitely won’t be up everybody’s street, but there are plenty of things for fans of horror, sci-fi, pitch-black comedy, or even all of the above to pick apart and have an absolute ball with. It contains just about everything you’d expect from such a subversive premise, from Fear and Loathing in Las Vegas-style drug binges to full-on body horror (just watch what happens when possessed Barry scores with an unassuming sex worker), all of it executed by a filmmaker with a deliciously grotesque vision and a twisted sense of satirical humour that will have you awkwardly laughing in the middle of dark, unpredictable moments that involve psychotic child kidnappers among other insane additions.

The movie is also, in its own strange way, a loving homage to classic grindhouse B-movies, with some (intentionally) cheesy effects crafted with what small budget they had, moments of gore and further debauchery that are shot in similar fashions to movies of the 70s and 80s – a driving scene is clearly shot in front of a projector, as opposed to the modern method of using greenscreen – and even inserting an intermission into the middle of this 99-minute movie. While the tributes don’t always seem apparent, given that the lack of moderate budget means that they had to shoot their way around some of the much gorier scenes, there’s fun to be had with other elements of this off-kilter throwback, including the synth-heavy score and especially lead actor Gary Green’s wildly expressive performance, which itself feels like the kind of over-the-top turn you’d find in one of those classic alien-invasion movies from the mid-twentieth century.

Genre fans will mostly get a kick out of Fried Barry, though again this really isn’t the kind of film that is designed to win over everyone. It’s completely understandable if you watch this movie and find no joy in the nasty mean-spiritedness of this world and its scenarios, but for me there was enough of a balance to make myself very interested in where this crazy story was going next, while also keeping things consistently entertaining in its own dark fashion that made me glad I was able to see the world through this very flawed pair of eyes.

Fried Barry is an entertaining sci-fi horror/pitch-black comedy that wears its obvious grindhouse B-movie influences on its sleeve, though some of its nastiness won’t sit well with everyone.

Fried Barry is now available to stream on Shudder.