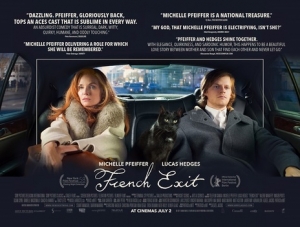 BASICALLY…: A financially-strapped Manhattan heiress (Pfeiffer) retreats to Paris with her son (Hedges)…

“Odd,” is the word that best describes French Exit. Director Azazel Jacobs’ darkly comedic drama – from a script by Patrick deWitt, who adapts his own book of the same name – is indeed odd, but in the same way that something like Yorgos Lanthimos’s The Lobster is odd; it’s just this absurdist tale told with such dry, deadpan delivery that it’s hard to know when to actually laugh, if at all.

Admittedly, French Exit perhaps displays a bit more emotion than The Lobster does, but the film does not dial down its po-faced drollness for anything or anyone, which makes it a film that is hard to love, but surprisingly easy to mildly appreciate.

The film begins as wealthy Manhattan socialite Frances (Michelle Pfeiffer), whose husband had passed away some years prior, learns that she has dried up all of her resources, effectively making her penniless. Shortly after selling what little they have left, she and her adult son Malcolm (Lucas Hedges) retreat to a friend’s apartment in Paris, with a small (to them, at least) amount of euros to their name and Frances’ black cat named Small Frank, which she is unusually attached to for reasons which become apparent later on. Once in the French capital, both Frances and Malcolm attempt to live as comfortably as they can, but they – Frances especially – struggle to survive in a world that is no longer open to them, with a host of eccentric figures that are far from the members of high society she has a bit more in common with.

Sure, it’s one of those movies where it wants us to feel some kind of pity for the one percent, right around the point where they’ve lost all their wealth and are thrust back into civilisation, but French Exit isn’t so much Schitt’s Creek as it is this Royal Tenenbaums-esque caricature of eccentric rich people with perhaps too much time on their hands. From the first moment we meet her, Michelle Pfeiffer’s Frances is one of those aloof and concerning types of wealthy folk, who displays some questionable behaviour throughout (flinging a knife around while drunkenly ranting about her financial situation, for one) which she nonchalantly blames on her flip-flopping mental state, and once in Paris cannot seem to stop herself from insulting people or, in one extreme circumstance, setting some flowers alight in a restaurant in order to attract a rude waiter. She is clearly not well, and often portrayed as this cold and unsympathetic creature who her poor son Malcolm cannot help but be around even when she shows little interest in his own life, including his engagement to an equally-frustrated Imogen Poots. It’s a testament, though, to how good Michelle Pfeiffer is here that the character, even at her worst, still comes off as mildly likeable, because there is a somewhat self-aware infliction in her deliveries which can often cut like a knife, and the actress does a rather impressive job at selling some of the more bizarre and, indeed, odd directions that this story, and along with it her character, ends up going down.

Case in point, remember when I said earlier that Frances held a very tight connection with her cat, Small Frank? Well, as it is so casually dropped around the halfway mark (and this isn’t a spoiler, because it’s hinted at during the official plot synopsis), Frances – and even the more sensible Malcolm – believes that her dead husband’s spirit now resides in said cat. As if that wasn’t strange enough, characters conduct a séance at one point to directly communicate with his spirit, like it’s suddenly become a slightly funnier version of that Blithe Spirit movie from earlier this year. The fact that everyone else is just so accepting of this rather absurd development makes it such a weird movie to watch, because it feels like you’ve just stepped into this alternate reality where people who already don’t exactly talk or even emote like normal folks do can be so open to the fact that reincarnation is not only a thing, but easy to accept as a way of life in the same way that one can be openly gay. Patrick deWitt’s script leans heavily into this surreal direction, while also retaining its established dry sense of humour, but for something as ridiculous as this to work with the tone that it has, it perhaps needed to go a little further in terms of its oddness, or at the very least give itself more of a comedic touch that’s more farcical and less dry.

More importantly, though, the film never gives us much of a reason to care about many of these people, despite the performances all around being pretty good. By the end, you know so little about them and what kind of relationships they have with each other that even the sudden addition of souls inhabiting cats’ bodies falls flatter than it should, because the people who this is all happening to are written too thinly or not explored nearly enough for the audience to understand them. However, while French Exit doesn’t entirely work in concept and execution, one can’t help but admire it somewhat for at least attempting to throw in all these crazy ideas into such an unlikely premise; it’s not every day that you can watch a comedic drama starring Oscar nominees like Michelle Pfeiffer and Lucas Hedges, and then in the middle of it throw in a twist about her dead husband’s soul being inside of a cat, so from a completely subjective standpoint, I have to give it some props for the attempt. The actual thing, though, could have been a lot better than it is, no matter how odd it gets.

French Exit has some ambitious, and extremely bizarre, concepts as well as a standout lead turn by Michelle Pfeiffer, but the execution remains too dry and unengaging to care about much of it.

French Exit is now showing in cinemas nationwide – click here to find a screening near you!