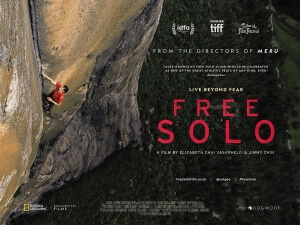 In early June 2017, climber Alex Honnold became the first person in history to free solo climb the El Capitan rock formation in Yosemite National Park. It’s no small feat, considering that El Capitan is just over 2,300 feet high, and the thought of climbing it without a rope or safety harness of any sort is the sort of daredevil madness that Tom Cruise exhibited this year in Mission: Impossible – Fallout.

In fact, Free Solo – the new documentary about Honnold’s extremely ambitious climb – kind of plays like a real-life Mission: Impossible movie at times; here you have this incredibly dedicated craftsman doing this massive death-defying stunt in front of a camera, but instead of all the spy stuff it’s just a story about a guy doing what he loves to do, only in this case it’s climbing up stuff without much in terms of safety. It’s ballsy stuff, and the film offers an extremely exciting and incredibly thrilling account of such a massive achievement.

Co-director Jimmy Chin – along with fellow filmmaker Elizabeth Chai Vasarhelyi, who operates behind the camera while Chin works in front of it – follows Honnold in the lead-up to the momentous event, including all of the preparation he undergoes to ensure it (mostly) goes off without a hitch, some of the injuries he sustains whilst practising, and the relationship that is blossoming with his girlfriend Sanni McCandless. We learn a little more about this adventurous climber along the way, from his somewhat stilted upbringing – his late father, theorised to have had an undiagnosed case of Asperger’s Syndrome, is described as someone who didn’t show a lot of affection outside of his own enthusiasm for travelling – to how he physically and mentally prepares for such a massive climb, including an all-vegetable diet and a never-ending desire to practise his climbing.

As we see, there seems to be no stopping this guy from doing the very thing he believes he was put on this planet for; not even a sprained ankle can prevent him from it, as he’s seen going up an indoor climbing wall shortly after being fitted for a foot cast. There’s clearly a passion brewing within his mellow soul that is fascinating to watch unfold, especially as we watch him interact with other people whether it’s his girlfriend or Chin or the numerous other film crew members following him around. He seems like a very chilled person in these scenes, overflowing with confidence but not too arrogant to feel entirely self-centred, and he appears to share some great chemistry with McCandless (I mean, he’d have to; they are an actual item, after all) which leads into an interesting angle the film takes, which involves Honnold somehow being caught in the middle of a love triangle, with the third party being his lifelong passion for climbing. There are moments in the film where he admits that there might not be room in his life for both of them, because while he clearly adores McCandless to bits, and she also adores him, his love for his craft tends to overshadow even that; after a fall inadvertently caused by her that leaves him with a couple of mild injuries, he reminisces about wanting to break up with her right there and then, if only because his future as a climber may have been jeopardised. It’s clear that this is what he lives for, more than anything, and the film does a very good job at displaying his passion without making him seem completely incapable of human emotions.

However, it’s the climbing scenes themselves, particularly the conquering of El Capitan that serves as the film’s climax, that serve as the major highlights. Using a camera crew attached to safety ropes, directors Chin and Vasarhelyi capture nearly every aspect of Honnold’s daring escapades up the numerous summits, which is already an incredibly bravura piece of filmmaking just on its own merits, but the fact that you actually care about his relationships and personal health given that you’ve spent enough time with him off the mountain surfaces makes it all that little bit extra suspenseful when you see him try to find his footing several feet off the ground. The final record-breaking ascent to the top of El Capitan is just as nerve-wracking as any stunt that Tom Cruise has pulled off in any of the Mission: Impossible films, and part of me wishes that this film was shot or at the very least shown in IMAX so that the sheer scope of the scene could be felt even more (though it works perfectly well on just about any screen, no matter what the size). Either way, these parts of the movie are incredibly filmed and made even more intense by the fact that you actually care about this guy and his love for climbing.

To the best of my knowledge, a dramatized version of this film hasn’t yet been greenlit, similar to how Robert Zemeckis’ The Walk was made after Man on Wire did so well, and given how this film has been both a critical and financial success with much more attention now given to Honnold and his incredible achievement, it wouldn’t surprise me if that turned out to be the case. Whilst watching this film, I could even see where it could actually work as a more straightforward drama piece, and who could be cast in these specific roles; if they greenlight it and decide not to cast Adam Driver as Honnold then I would be very disappointed, because the guy does look like him quite a bit, and even sounds like the actor on occasion as well. I would be equally saddened if they didn’t shoot the climbing scenes, or at the very least the El Capitan one, on IMAX because that would be an amazing showcase for the format.

But until that (eventual) day comes, make do with this fantastic documentary that worth the climb.

Free Solo is a fantastic documentary that puts climber Alex Honnold and his undeniable passion for climbing into the spotlight, in a movie that neatly balances the emotional human qualities with nerve-wracking climbing scenes that are straight out of a Mission: Impossible film, especially the climactic and record-breaking ascent of El Capitan.