Freaky (Review) – The Hot Chick But Deadlier, And It’s Way Better Than It Sounds 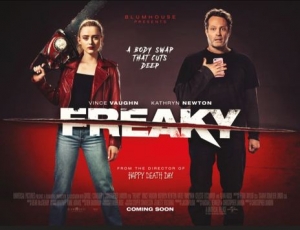 Right now, I can picture director Christopher Landon waltzing into the Blumhouse executives room, company founder Jason Blum sat at the head of the table, with a great big grin on his face because he’s about to pitch Freaky to them. “Hey,” he begins, “remember The Hot Chick? Y’know, that Rob Schneider body-swap comedy nobody liked or even remembers all that well from nearly twenty years ago?” So far, Blum and his executives are – rather understandably – less than impressed. Luckily, though, Landon has an ace up his sleeve: “Well, what if instead of the high school girl swapping bodies with Rob Schneider, she instead swapped it with Jason Voorhees?” And as soon as that bombshell was dropped, Blum and company stood up, made it rain dollar bills all over Landon like he was the hottest dancer in the club, and told him to go make that movie at once.

Obviously, I’m sure that’s not how it went down in real life, but when you’re presented with an idea like that, and the resulting movie takes full advantage of every single one of its possibilities, to incredibly pleasing effect, you’d be quite ecstatic as well.

Freaky quickly introduces us to the legend of the Blissfield Butcher (Vince Vaughn), a serial killer who has been brutally murdering teenagers in the local town for decades without ever being caught, and in pure slasher movie fashion, his grand entrance is via some very bloody kill scenes on some unsuspecting teens. We then meet fellow teen Millie (Kathryn Newton), a shy and meek high school student who is regularly picked on at school by the mean girls and even her cruel and abusive shop teacher (Alan Ruck, aka Cameron from Ferris Bueller’s Day Off). One night, she ends up being stalked by the Blissfield Butcher and stabbed in the shoulder by his new mythical dagger, but the next morning they both wake up in each other’s bodies; Millie is now in the body of the Butcher, and vice versa. Now, Millie (as the Butcher) must try and find a way to not just get her body back, without being accosted by the authorities who have stepped up their game in trying to find the killer, but to also stop the Butcher (as Millie) from using his new disguise to continue his bloody rampage.

As with his Happy Death Day films – which also provided a neat twist to the slasher genre with its Groundhog Day-esque plotting – director Landon manages to blend both horror and comedy elements together neatly in Freaky, without one entirely overlapping the other or disrupting the neat pace or tone it has set for itself. You can laugh at some of the amusing details (for example, the tall and menacing Butcher finds it difficult to take down a person when they’re in the body of a petite high school girl), but also wince at the excessive, over-the-top violence which can get gloriously gory (one kill makes extreme use of a buzzsaw), sometimes in the exact same scene, and it works because Landon is smart about knowing when to let certain intimidating moments play out while also injecting a healthy sense of humour into the scene. Rarely does it create any kind of tonal whiplash, so you can sit there being thoroughly entertained by both the fun body-swap comedy and the intimidating slasher horror playing out simultaneously in front of you, all while not feeling like one movie has completely taken over the other.

The body-swap element of the film mines some great laughs from a script that knows the right time and place to be silly – Millie, as the male Butcher, finds peeing standing up completely fascinating – but also rather genuine as well. There are good scenes involving Millie’s mourning, alcoholic mother (Katie Finneran) opposite this hulking presence who so happens to be her daughter, which can be funny as well as heartfelt, while Millie’s friends (Celeste O’Connor and Misha Osherovich) have very likeable moments in the film that certainly have you rooting for them. Then, of course, there’s the two body-swapped individuals themselves, and both Vince Vaughn and Kathryn Newton do such a fantastic job of emulating each other’s mannerisms that you completely buy that they have been taken over by each other’s very different characters. Vaughn nails the prissiness and exaggerated teen speak of Newton’s original character without ever going too over-the-top with it or coming off as insensitive, while Newton near-flawlessly captures the serial killer’s steely, cold-blooded stares and stiffened body language while also being rather intimidating herself; you can tell that both actors worked very closely together to perfectly capture each other’s character identities, while also finding ways to make them their own at the same time, and the results are two very commendable lead performances that fit extremely well into the overall comedy-horror tone of the movie.

Speaking of horror, slasher fans will be very pleased to know that this movie not only contains some very gory and sometimes creative deaths of its own, but also in its own way feels like a love letter to those kinds of movies. Within the opening scene, there are references to the Friday the 13th series left and right, from the mask that the killer is wearing to him just suddenly bursting through a window (even the movie itself predominantly takes place on that exact date), but it never feels like the movie is trying to rip it off or be very cynical about it; in fact, it’s such a strong homage while also putting its own spin on things, that you could logistically see Landon actually go on to make a new Friday the 13th movie, with Vince Vaughn as the new Jason Voorhees (the actor’s certainly got the physicality, height and overall intimidation down to a tee, so unless Kane Hodder decides he wants a comeback to his signature role, then by all means cast Vaughn as the new hockey-masked killer icon). The rest of the movie establishes more of its own identity, though, and it paves the way for a number of very fun and satisfying kills as well as some strong drawn-out suspense in certain scenes, showing that the filmmakers and especially Landon knows more than a thing or two about what makes an effective slasher movie. Between Freaky and the Happy Death Day movies, he’s really been able to revitalise the slasher movie genre with all these fun new twists, although Freaky goes for the gore way more than the other movies do, and he actually manages to show more of his influences here as well.

It’s got everything a fan of both body-swap comedies and slasher horrors could ever ask for, and executes all of them with a keen sense of love and joy for each genre which makes it one of the stronger examples of either category for a good while. No wonder Jason Blum and his executives, in the wildly imaginary scenario I played out in my mind earlier, were so ecstatic about this idea in the first place.

Freaky is a frightfully fun love letter to slasher movies with its heavy gore and creative kills, and also a funny and even endearing body-swap comedy, where lead actors Vince Vaughn and Kathryn Newton do excellent work emulating each other’s mannerisms, and where director Christopher Landon gets to show his love and appreciation for both genres with a neatly-mixed premise that gets a wildly freaky execution (in the good sense).

Freaky will be released in UK cinemas on Friday 2nd July 2021 – click here to find a screening near you!