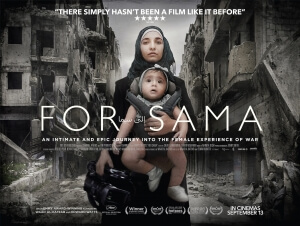 The conflict in Syria has become one of the most troubling and ongoing humanitarian crises of the modern era, yet nobody seems willing to act on it or even acknowledge it. People are currently so wrapped up in everything to do with Brexit or whatever stupid racist thing it was that Donald Trump just tweeted about, or even in far less important stuff like the live-action Disney remakes or which new reality show star just launched their new clothing line, that an actual cause for concern such as daily bombings that have decimated entire street blocks and often killed entire families, gets swept so far under the rug that it no longer appears to be in the same universe.

More of us need to be addressing this very serious issue, and I have the feeling that when people check out the fascinating new documentary For Sama, the Syrian conflict is going to become a lot more prominent in their conversations. At the very least, they’ll be declaring this film an absolute masterclass of guerrilla documentary filmmaking, and a powerfully stark look at the very real consequences of living in endless struggle.

The entirety of the footage was shot over the course of five years, when Waad Al-Khateab lived in Aleppo when the Syrian Civil War broke out between loyalists to President Bashar al-Assad and the regime’s opponents. Over this time, while she habitually films one horrific incident after another, we see her fall in love with, and eventually marry, Syrian surgeon Hamza Al-Khateab, with whom she has a baby daughter, Sama. It is Sama who the film is purposefully revolved around, as Waad frames her footage – edited down from over 500 hours to just over an hour and a half by co-director Edward Watts – like a video diary, in which she directly addresses her infant daughter about all the horrors that she and Hamza keep seeing unfold around them, and that one day if she does watch it then she will understand why her parents stayed in one of the most hostile and dangerous war zones in the world over the first few years of her life.

Whether or not Sama does eventually decide to watch her mother’s film later in life, she should be unreservedly proud of what her mother has accomplished; she has given the world, which has largely turned a blind eye to all this carnage, a much-needed glimpse into life around this impossible, and impossibly grim, scenario. Buildings are bombed so frequently here that they have started to become white noise in the background as the citizens do their best to continue living their lives as normal – an act of defiance, as many believe that fleeing would be handing the victory over to the enemy – with even the children taking advantage of the giant craters in the streets as their new (literal) swimming holes. What’s more, because the majority of the footage takes place in the hospital where the family lives whilst Hamza works, we get to see hoards of people being rushed in to be treated after getting caught in explosions or gunfire, not many of whom are fortunate to survive. It’s utterly devastating to see the multiple lifeless bodies left to lie on the hospital floor, with friends and family members weeping over them as they lay there, completely motionless and covered in blood and ash. In the hands of a far less able filmmaker, all of these dead bodies would venture dangerously close to reprehensible exploitation, but Waad Al-Khateab manages to keep such a firm focus on the tragedy unfolding in the moment that the bodies, as grim as they are, have purpose rather than just being there for shock value.

Beneath the carnage and overwhelming levels of grief, not to mention the sheer amount of suspense and fear that you feel in certain scenes – in one, a nine-month pregnant woman is forced to have a caesarean after getting caught in a blast, and the scene that follows had just about everyone in the audience at my screening audibly gasp – there is a powerful underlying story of a family caught in the crossfire that’s held together by love and optimism. Waad Al-Khateab holds nothing back in her footage, and that also applies to the quieter, much sweeter moments of both her and husband Hamza enjoying each other’s company, and of them playing with their infant child, all of which give the film a ray of sunshine in an otherwise overcast and gloomy environment. As Waad’s narration continues to describe everything as though she were reading her daughter a bedtime story, you feel the agony in her voice growing with every passing moment as the safety for her family becomes more and more of a priority as the bombings get closer to the hospital, and you can also sense in the way she speaks so candidly about all these things that she has such a drive to tell this harrowing chronicle to anyone who cares to listen, even if it’s her own infant daughter. She is a powerful storyteller, with a voice worth listening to and a tale which could catch anyone off guard, not to mention an endless supply of courage for risking her own life on multiple occasions to capture such dangerous atrocities on film for the world to see.

If you can’t manage to get out to the cinema to see this, and I won’t blame you if you can’t because it doesn’t seem like this is getting an especially wide release, then make sure you tune in to watch its terrestrial on Channel 4 at some point around the end of October. It’s a movie that is absolutely worth seeing in any format, as it’s a powerful and stark reminder that there are far, far more devastating things going on around the world than we realise, but with the right amount of filmmaking talent and a true dedication to the craft, it’s a stunningly real portrait of an exceptionally dark period in international history. So, next time you whinge about the latest coffee range at Starbucks or about the Game of Thrones finale being underwhelming, just think about how good you have it compared to people with actual problems in much more dire circumstances.

For Sama is an exceptionally powerful documentary that highlights the atrocities of the Syrian Civil War, though a stunning combination of Waad Al-Khateab’s gripping raw footage and its bleak tone which feels all too appropriate for an international crisis on this level.

If you would like to help those in need over in Syria, then feel free to donate to one of the following charities:

A donation can help change a person’s life – please consider making one today.

Want to decide what the movie’s like for yourself?
Check out For Sama showtimes in London
via