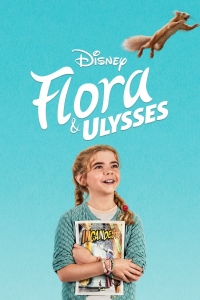 Unfortunately for Marvel fans, despite the presence of a superheroic squirrel, Flora & Ulysses is most certainly not the covert movie debut for the fan-favourite character of Squirrel Girl.

Funnily enough, though “Squirrel Girl” is also an apt way to describe this movie, for it contains both things in an equal capacity, and just like the otherwise-unrelated Marvel character it’s a fun, sweet and delightful family movie with plenty of old-fashioned silliness and enough of a grounded sense of heart to pass around.

Based on the acclaimed children’s book by Kate DiCamillo – whose previous adaptations of her work include Because of Winn-Dixie and The Tale of Despereaux – and brought to life by director Lena Khan and writer Brad Copeland, Flora & Ulysses first introduces us to Flora (Matilda Lawlor), a ten-year-old girl and self-described cynic whose parents (Alyson Hannigan and Ben Schwartz) are in the process of separating. She soon comes across a squirrel she names Ulysses – after the vacuum that almost kills the poor thing – who very quickly demonstrates that it has amazing superpowers, much to Flora’s amazement. Inspired by her father’s stalled comic-book background, Flora tries to help Ulysses develop his powers – which range from flying to being able to write lines of poetry on a typewriter – which also starts to bring her parents closer together, although their intentions are threatened by a local animal control officer (Danny Pudi) who will stop at nothing to capture the squirrel after it causes some alarm around town.

The movie has a very similar tone and look to one of those Disney family films you would have seen during the mid-to-late 90s, and I actually mean that in a good way (because, for one, Flora & Ulysses is actually a lot better than some of the ones actually released around then). There’s lots of slapstick and physical comedy, some of which can be overplayed but not so much where it’s distracting, though there is also a fair amount of heart that manages to balance everything out, a lot of which comes from how likeable and entertaining the main characters are. Both Flora and Ulysses – portrayed respectively by sweet young actress Matilda Lawlor, and some rather decent CGI work – are very fun and enjoyable leads, but we also get to spend time with Alyson Hannigan and Ben Schwartz as the parents who, despite appearing on the verge of separating, clearly still have a strong connection which just happens to be in flux at the moment. Their arcs are believable enough to work in this story, and the actors’ performances are rather good and surprisingly grounded enough to make you really care about them (you’ll be amazed by how well Alyson Hannigan is selling some of her teary scenes opposite a CGI superhero squirrel) – all in a film where the big sell appears to be the silly adventures of this young girl and her heroic squirrel companion.

There are also some fun jabs at a few of the familiar Marvel Studios tropes (almost a given, seeing it’s a Disney film with superpowered beings in it), from heroic landing poses to the obscene amount of public damage one seems to cause when supposedly defending it. More direct references to Marvel superheroes like Iron Man, Captain Marvel and Black Panther are gotten out of the way quick – all in the film’s opening sequence, no less – but despite taking place far outside the Marvel Cinematic Universe, Flora & Ulysses seems to have come from creatives who are at the very least appreciative of the familiar but formidable formula that they’ve been working with over at that division. For both younger children and even a few of the adults, this is a fun enough beginners’ crash course into the world of on-screen superheroes, balanced out with a tremendous amount of heart and sweetness to appease the most basic of Disney audiences.

Some parts of the movie, though, don’t always work in the way the filmmakers perhaps wanted them to; some of the jokes don’t always land, Danny Pudi’s animal control agent is more or less a stock movie villain character, and most jarring of all there are frequent appearances by a psychotic cat that’s all-CGI, which is baffling because while it makes sense for the character of Ulysses to be fully computer-generated, this cat is supposed to be a more normal feline, which makes his sudden animated textures stand out all the more.

Those are basic flaws, though, and don’t take away from the sweet nature that is intended elsewhere in the film. At the very least, Flora & Ulysses is a fun way to pass the time on Disney+ before the next episode of WandaVision drops.

Flora & Ulysses is a fun and sweet family comedy that contains loving jabs at certain Marvel Studios tropes, but also stacks up a very strong amount of heart, particularly from how likeable the main characters are, which should make it formidable viewing for children and adults of all ages.

Flora & Ulysses is now available to stream on Disney+.