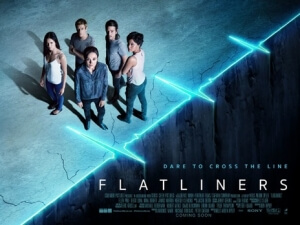 BASICALLY…: A group of medical students conduct experiments on each other that enable them to experience the afterlife, only for them to come across some unwanted paranormal visions…

I suppose the custom is to come up with some sort of pun based around this movie’s title, such as “Flatliners is dead on arrival”, or “Flatliners completely flatlines”, or many other puns that critics have used to describe this remake of the 1990 Joel Schumacher film.

I’d like to offer an alternative one-liner that’s a bit more direct; Flatliners (circa 2017) sucks.

Even people who hadn’t seen the original, which I am not ashamed to admit to being one of them (I just don’t have time to see them all, guys; I have a life too, funnily enough), weren’t looking forward to this movie, because it just looked like a dull and completely useless waste of time, and lo and behold it turned out to be exactly that.

The film takes the same basic premise of the original, which sees a small group of medical students conducting a series of experiments on themselves to see if there is indeed an afterlife, which involves stopping their heart for a few minutes and then reviving them before it’s too late. Initially, they experience some of the perks that come with stopping your own heart (as you do), such as a heightened intelligence and constant energy in one of the film’s many ridiculous plot points, but soon a bunch of scary visions come their way which indicate they all have some past demons they need to shed before something drastic happens.

The original, from what I hear of it, has become something of a cult classic since it first debuted 27 years ago, despite a low-ish Rotten Tomatoes score of 49%, so even though a remake would initially seem like a good idea – after all, it’s sometimes better to remake something that wasn’t critically acclaimed since there’s a chance it could actually improve on its predecessor – many have still deemed it to be yet another entirely unnecessary do-over of a popular film amongst audiences. As someone who doesn’t have the past experience of watching the original film, I can say that even as a standalone movie, this is utter rubbish; it’s a dull ride from beginning to end, as you don’t care at all about what’s going on, and certainly not about who it’s all happening to, and you’re just left there not being entertained and wanting the movie to finish as soon as it can, which given that this is inexplicably a near two-hour film can really push your patience even when nothing of interest is happening.

You get the feeling that director Niels Arden Oplev – the guy who also did the Noomi Rapace-starring Swedish version of The Girl with the Dragon Tattoo – either got a ton of notes from the Sony studio executives and buckled under the pressure, or was held back while said executives proceeded to hack the film to pieces with their complete inability to provide wholesome entertainment and absolute misunderstanding of what they think modern audiences want to see in this kind of film. Either way, it’s obvious that there was more than one voice working on this film, and all of them couldn’t come together on a compromise to make this at the very least a worthy film to match the original, which this movie utterly fails to do. Their combined efforts have given us hollow characters who you either don’t care about or are just so smarmy and self-satisfied you not only hate but almost immediately want to punch in the face – James Norton’s character in particular is such a spoiled douchebag it’s amazing that anyone thinks he’s worth spending any time around – a plot that makes less sense as it goes along, including a far more supernatural jump-scare fest because according to Sony that’s what people love about horror, and in perhaps the biggest insult to fans of the original, star Kiefer Sutherland showing up not as his character from the previous film, as he had so proudly claimed in the press for this film, but instead as a new and completely pointless character that’s more like he’s doing an impression of Rick from Rick and Morty instead of actually acting.

The scares in this movie are so utterly lame that it’s laughable that this is actually considered to be a legitimate horror film, and even more so that the Sony executives thought this could seriously work as one. In horror, the scares need to be far cleverer than just something jumping towards the camera with a loud musical sting if they’re to leave an impact, and while there are one or two moments where Oplev actually does have a sense of that, it’s almost immediately ruined by the unlikeable nature of the characters or by the fact that at this point, you just don’t care.

As a standalone movie, it’s a pretty dull experience, and I can’t imagine what it must be like for someone who has seen the original to then see this and get even madder about how much it assumedly gets wrong. This is a movie made for nobody except the studio who for some reason wants to keep the rights to the original Flatliners so badly that they would make a terrible remake of it just to show itself off. If that’s true, then I’m sure they loved it; the rest of us, however, now have to deal with the fact that not only is there a new Flatliners that exists, but that it absolutely sucks.

Flatliners is a dull and unentertaining ride from beginning to end, failing to grasp what made the original an interesting concept and instead replacing it with a ridiculous amount of lame jump-scares, unlikeable characters, and a clear sense of studio control over something that was obviously made for overwhelmingly cynical reasons.