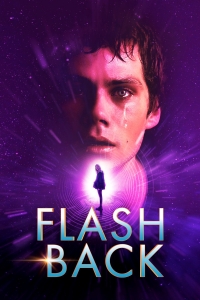 BASICALLY…: A young man (O’Brien) experiments with a mysterious recreational drug to solve the disappearance of an old high school friend (Monroe)…

Writer and director Christopher MacBride made his first movie eight years ago, in the form of faux-documentary The Conspiracy, and in that time between then and his second feature, Flashback, it seems that he has really been thinking thoroughly about what kind of story he wants to tell next. However, it seems that he thought about it perhaps too hard, because while his sophomoric effort has quite a number of ideas circulating in its head, the end result is a confusing and oddly unengaging attempt to execute each and every single one of them at once.

Flashback stars Dylan O’Brien as Fred, a man in his early 30s who’s seemingly settled for a mundane life, from a pedestrian job to living in a mostly characterless apartment with his wife Karen (Hannah Gross), to tending to his dying mother (Liisa Repo-Martell) who barely even remembers who her own son is anymore. Soon, however, memories from his high school days begin to rapidly resurface, from around when a new recreational drug known as “Mercury” was in circulation, all of which seems to centre around former school acquaintance Cindy (Maika Monroe), who has since dropped off the face of the earth. Fred reunites with other high school alumni including drug dealer Sebastian (Emory Cohen) and weedy user Andre (Keir Gilchrist) to relive their vibrant youth and experiences with the drug, in order to figure out whatever happened to their old pal Cindy, but elements from the past, present and even future start to blend together, leaving Fred – and by extension, the audience – to figure out what the hell is actually happening.

While the idea of a drug that lets its users experience different aspects of time and space isn’t a brand-new one, there is plenty of room for such a concept to work within a mystery-type setting; however, said mystery angle is quickly dropped, and very soon the film becomes a random assortment of sequences going from one flashback to another, often with very hard-to-watch strobe effects and millisecond editing (seriously, those with epilepsy should steer clear of this movie). It’s evident when the movie is throwing in all of these stylish cuts and scene transitions that there is at least some idea of what kind of intent it’s going for, but because the execution is so haphazard and even chaotic, it becomes difficult for the viewer to fully absorb all of these plot developments since they distract so easily from what’s being said or explained. As such, you’re left watching a movie where you have little to no idea about what is going on, and in what order since it jumps around so much that it’s hard to tell which reality is which (if there even is any sense of reality), making it something that’s far too wrapped up in its own puzzles that it doesn’t consider giving its viewers any answers, hidden or otherwise.

Crucially, MacBride’s film also lacks a compelling reason for the audience to care about most things and most people. Despite an empathetic performance by Dylan O’Brien, we barely know much about his character before the movie jumps right in to its mind-bending plot, nor what his life might have been like before any of this begins to happen to him. The same goes for Maika Monroe’s Cindy, who we’re supposed to buy as some kind of free-spirited nihilist who wants to be free from society’s chains, but comes across more as that one irritating goth kid spouting a bunch of pseudo-intellectual nonsense on Tumblr at three o’clock in the morning; there’s no real reason given as to why O’Brien’s Fred is suddenly so obsessed with this girl who he hasn’t seen in about fifteen years, and so any attempt to inject some intrigue backfires because, again, the viewer isn’t given a solid enough reason to care.

It is a film that is most certainly style over substance, but while there are definitely times when the style becomes too much to bear – once again, epileptics should run as fast as they can from it – MacBride’s direction does have a couple of interesting bright spots. The superfast editing, while overwhelming on several occasions, is impressively spliced together; having dabbled in some editing myself in the past, I can confirm that it is not easy to string together tiny pieces of footage in the manner that this film does, and to that end I do have to tip my hat somewhat to editor Matt Lyon who really seems to have put his all into making these quick cuts look and feel as seamless as he can, despite the numbing side-effects.

Sadly, though, Flashback doesn’t rise beyond the realms of mediocrity in pretty much every other department. It’s far too convoluted and complicated to decipher, and lacks characters who you can follow that are actually worth caring about, all of which are things that a highly acute level of filmmaking cannot entirely mask or cleanly wipe away from the memory.

Flashback is a confusing and largely unengaging attempt at sci-fi psychological thriller, failing to execute a convoluted plot in the midst of its several ideas, nor crafting characters worth caring that much for, all despite some ambitious intentions and some impressive (if difficult to watch) editing tricks.

Flashback is now available to rent or buy on digital platforms, including Amazon Prime Video.