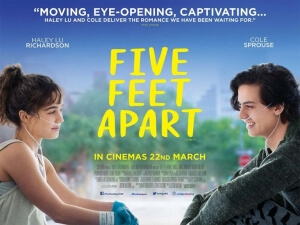 BASICALLY…: Two young cystic fibrosis patients (Richardson and Sprouse) find their growing attraction to each other complicated by not being allowed to be too near one another…

It’s a cynical thought to simply discard a movie like Five Feet Apart as yet another one of these “dying teen” movies, made in the wake of The Fault In Our Stars’ success; that would imply that the movie just takes the exact same steps that it and many other movies like it take, where it follows two attractive young people fighting a potentially fatal disease who meet, don’t get along at first, but over time start to develop feelings for one another, and at some point declare their love before one or both of them eventually succumb to said illness.

Now, it’s no secret that Five Feet Apart does use this certain formula which you’ve seen many times before (though not entirely to the letter), but even though that’s the case you can still tell whether it’s a decently executed one or not, and this movie is luckily just decent enough to hold your hand through familiar, but well done, territory.

The central illness in Five Feet Apart is cystic fibrosis, which is what teenager Stella (Haley Lu Richardson) has suffered from all of her life; she’s virtually living in her hospital ward, spending her time creating YouTube vlogs and hanging out with her visiting friends, while also keeping her clinical OCD in check. She soon meets a new arrival, Will (Cole Sprouse), who’s also a CF sufferer and is there as part of a new drug trial; he’s not quite as optimistic as Stella is, as he’s constantly reminding himself and others that he’s very likely going to die soon, so he’d rather spend his remaining time being a miserable little sod than anything else. So far, so familiar, as is the fact that neither Stella nor Will warm to each other upon their first meeting; over time, of course, they become closer, but not literally so – because of the guidelines that require CF patients to keep a distance of six feet from each other or else risk catching bacteria and possibly dying as a result, Stella and Will must find a way to keep their relationship going while not getting too physically close to one another.

While it is, again, packed to the brim with familiar themes and tropes that come with movies like The Fault In Our Stars, Me Before You, Midnight Sun and others, Five Feet Apart just happens to do these clichés well enough to hold your attention. It doesn’t shy away from how rough the condition can be, as well as its treatment which consists of endless pills, vibrating vests to help patients cough up phlegm, and having to wear face masks when wandering outside of their rooms, all of which it does a good job at not sugar-coating or making it look incredibly easy to deal with. They really take this condition seriously, hammering in every now and then that it could very easily spell doom for those who end up contracting unwanted germs or bacteria, and in some upsetting scenes showing us these consequences right there on the screen. I don’t know much about the condition itself, but I am curious to know what real-life CF sufferers think of this film should they decide to go and see it; for all I know, it could well be a dead-on interpretation of cystic fibrosis, or even a romanticised exaggeration, but I have a sneaking suspicion that anyone who has it, or knows someone associated with it, will probably be more prone to catching strong emotions just from watching this film.

Regardless of whether or not it’s an accurate representation of the condition, however, it’s fortunate enough to have two strong young actors leaving one hell of an impression in their respective portrayals of CF sufferers. I’ve seen Haley Lu Richardson in a bunch of things prior to this, including The Edge of Seventeen and Split, and even one of her earlier works, the direct-to-DVD post-apocalyptic actioner The Last Survivors, and I’m glad she’s now at a point in her career when she can easily carry movies like this because she’s a talented actress and excels as this endlessly likeable lead with a strong sense of tragedy around her, prompted by the survivor’s guilt she feels due to the passing of her older sister. Meanwhile, with Cole Sprouse, it was at first surreal to see him because until now I only knew this guy as young Ben Geller from Friends (I know he’s been in other stuff like Big Daddy, Riverdale and The Suite Life of Zack and Cody, but Friends is primarily where I remember him from) but seeing him in this movie I have to admit I was surprised how good of an actor he actually is; he manages to take someone who could have so easily come across as this pretentious and self-centred little git, and actually make him sympathetic and easy to root for. Both he and Richardson do great work here, and they share strong chemistry which certainly helps us to buy their budding romance and also to care for and even cry with them in some of the more upsetting scenes in the movie. It also helps that they are aided by director Justin Baldoni, himself a working actor and who here shows that he is more than capable of directing other actors to really strong performances.

Though the familiar nature of the plot wasn’t a huge distraction for me, I can very easily see someone being turned off by the number of clichés it does carry out, primarily if they feel like they’ve seen it so many times that they’re now sick and tired of them. I do understand where they’re coming from, especially since there’s been so many movies like this that have come out in the wake of The Fault In Our Stars, and the vast majority of them do seem like they could easily blend together alongside Five Feet Apart – in fact, this movie even shares one of the same songs on its soundtrack as that film – but unlike some of the weaker or more forgettable attempts to cash in on The Fault In Our Stars’ popularity, this one does actually feel like there was some genuine passion behind it, and that they wanted to be a little better than something with more cynical intentions. If nothing else, it’s a way better example of the sub-genre than something like Everything, Everything.

Five Feet Apart certainly plays with a collection of familiar “dying teen” movie tropes, but it just happens to do them well enough to be considered one of the stronger post-Fault In Our Stars examples, especially when you take into account its serious approach to cystic fibrosis as well as two strong lead performances that really make you buy this sweet romance between them.