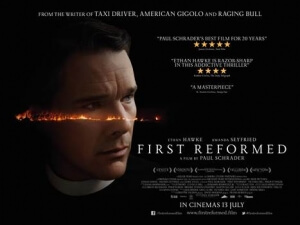 BASICALLY…: A reverend (Hawke) begins to question his faith and morality when he is confronted with a serious dilemma…

Paul Schrader is probably one of the most, if not the most, famous screenwriters in Hollywood best known for his scripts to classic Scorsese flicks Taxi Driver, Raging Bull, The Last Temptation of Christ, and Bringing Out The Dead, as well as penning films for other directors like Peter Weir, Brian De Palma and Sydney Pollack across a career spanning decades. He has also made quite a few films of his own during that time, from high-concept vehicles like Cat People and Dominion: Prequel to the Exorcist (aka the alternate and slightly better version of Renny Harlin’s Exorcist: The Beginning), to lower-budgeted and often direct-to-video material like the Nicolas Cage vehicle Dying of the Light and the controversial erotic thriller The Canyons. As a writer, his work is often considered second to none; as a filmmaker, on the other hand, he’s certainly struggled to find the right material that can match some of his greater work from earlier in his career, whether he’s also credited as writer or not.

That seems to have now changed with First Reformed, a movie that Schrader both wrote and directed, and is being hailed as one of his best pieces in years, maybe even decades. It is certainly a peculiar film, one that’s fascinating in the direction it heads down, and also one that will at times leave you scratching your head over whether what you’re witnessing is a subtle masterpiece or a pretentious exercise in showing the darkness of the soul. In my opinion, it is both, but also a captivating experience unlike most things I have yet witnessed so far this year.

In the film, Ethan Hawke plays Reverend Ernst Toller of the historic First Reformed Church that was a stop on the Underground Railroad and is considered a landmark. As Toller prepares for a ceremony honouring the church’s 250th anniversary, he is approached by a pregnant woman named Mary (Amanda Seyfried), who urges him to talk to her husband Michael (Phillip Ettinger), a radical environmentalist whose strong beliefs in climate change are having a negative effect on his mental well-being. His initial conversation with the inflicted man, and the events that follow shortly after, force into action a series of events and encounters that lead to Toller questioning his moral stance, and whether he can follow through with a radical plan of his own to disrupt the system.

Toller’s plan, coupled with his alcoholism that he simply refuses to acknowledge, as well as his own tragic history that eventually led him to a life of religion, forms part of the film’s narrative device, a series of journal entries that he jots down in a book as part of an experiment he is undertaking to write his thoughts and then burn it all after twelve months. It is a device that helps us understand what’s going on in this man’s head – not to mention how it gives all the sudden instances of narration explaining to us what he’s thinking a lot more natural instead of awkwardly shoehorned in, Blade Runner theatrical cut-style – but it also reinforces how, like some of Schrader’s best work, this is a character study of someone so compelled by the injustices of the world that he is willing to forego his commitment to a higher power in order to pull it off. Schrader writes the character in such a way that we can sympathise with his realisation, but not be on board for some of his other personality traits like his habitual drinking and especially the plan he intends on pulling off, which is bound to widen some critics’ eyes for its sheer volume of insanity. He also makes the interesting decision to present the film in a 1.37:1 aspect ratio – commonly referred to as “Academy Ratio”, for all you film snobs out there – which literally boxes in this character’s world and makes it feel somewhat claustrophobic, even when he’s seen wandering about in the most vast of environments. That just hones in on how the character seems trapped by his own demons, struggling to convince himself that he is a loyal man of God but is just as prone to radical thoughts as the next person, and as we learn more about this man and what he has gone through in his life then we get a more clear picture that this is one deeply, deeply troubled individual who, in the words of Howard Beale in Network, is mad as hell and not going to take it anymore (albeit not quite in as angry a fashion).

The character is one that a great actor like Ethan Hawke was presumably put on this great Earth to play, and he is absolutely stunning in this movie, delivering a quiet but earnest portrayal of this complex fellow, who can be calm and soothing in one scene, and intense as all hell in another. Quietly powerful, too, is Amanda Seyfried who offers a more noble and rational perspective on things, and together she and Hawke share a mutual appreciation, one that’s not necessarily burning with strong chemistry but is a sweet portrayal of two people who respect one another and hold each other in high regard. They also form part of some of the film’s stranger sequences, including one that involves floating in mid-air, and an ending that is bound to be one of the key talking points of this movie, just for its sheer ambiguity alone, but both are game to really dive into their characters and in doing so deliver some of their strongest performances yet, Hawke especially.

Like the majority of Schrader’s work, this is not a film for everyone, nor was it designed to be. It’s a slow-burner and deals with some pretty heavy topics, even offering imagery that some may find disturbing and others fascinating. Either way, you’re in for a rather peculiar treat if you decide to check this one out.

First Reformed is a peculiar little film, which is certainly boosted by its strongly written central character and its stunning portrayal by Ethan Hawke, but even though it deals with complex themes it does so in a way that not many people are likely to get entirely behind, but those who do will be rewarded with a cerebral and thematically rich oddity of a film.