First They Killed My Father (Review)

First They Killed My Father (Review) 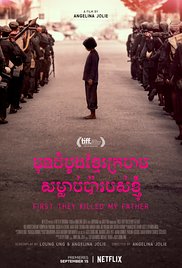 BASICALLY…: A young girl in 1970s Cambodia witnesses first-hand the genocide and war crimes committed by the deadly Khmer Rouge…

If there’s one thing you can say about Angelina Jolie’s directorial career thus far, it’s that she hasn’t been particularly fortunate with what she chooses to make. Despite a decent debut with the 2011 Bosnian war drama In the Land of Blood and Honey, her choice to follow it up with failed Oscar-bait project Unbroken and especially her painfully dull vanity project By The Sea – which remains her worst film to date – have not exactly proven her to be the best films to help put her in the same class as Clint Eastwood or Ben Affleck or other great actors-turned-directors.

But if there’s another thing you can say about her as a director, it’s that she always has a noble intention behind everything she works on, even when the execution of said intention isn’t as strong as she thinks it might be. Take for instance her latest film, First They Killed My Father – also her first collaboration with Netflix as a distributor – which certainly has strong goals, in this case to show the brutality of life in mid-70s Cambodia, but feels a bit heavy-handed in how it portrays such a horrific point in Cambodian history.

It is the true story of Loung Ung (played by young newcomer Sareum Srey Moch) who, at the age of five, was evacuated from her home by members of the Communist Party of Kampuchea, better known as the Khmer Rouge, and along with her family and several other Cambodians was placed in a remote village where they were forced to work and abide by the Khmer Rouge’s doctrine. Loung Ung would end up seeing the horrors of what would become known as the Cambodian genocide first-hand, from seeing loved ones succumb to starvation, to the militants’ brutal punishments of people who disobey their orders, to eventually being trained to become a child soldier to fight the Vietnamese army.

Ung, who co-wrote the script with Jolie which in turn was adapted from her own memoir, clearly experienced some true horrors in her early years, and Jolie uses all of her strength as a director to make sure that her story is told with as much authenticity and genuine passion as possible. For the most part, she succeeds; by placing the focus entirely on young Ung, with the camera very rarely leaving her side, it allows us to see this horrific event from a more innocent pair of eyes, one that isn’t entirely aware of what’s going on around her but certainly knows it’s not good by any means. It’s a tactic used by many filmmakers in the past to show truly evil parts of history, and it’s not like Jolie reinvents the wheel here, but it works because it is an effective method of real-life storytelling, especially for something as brutal as the Cambodian genocide. Jolie uses this angle far better here than she did with a similar vantage point in Unbroken, because here you do actually get to see what kind of effect all this terrible stuff has on its main protagonist, unlike in that film where we are just shown it without being given any reason to actually care; and while young actress Sareum Srey Moch isn’t the greatest child actor in the world – she tends to keep just the one facial expression throughout the film – she does just about manage to convey her character’s silent suffering but in a way that an unknowing child would only act.

It’s a well-shot movie, with cinematographer Anthony Dod Mantle using the vast colours of the Cambodian countryside to create something peaceful yet horrifyingly alienated, and while Jolie does still have a lot of hurdles to overcome as a director – her pacing is still rather slow, though not as much as By The Sea because things do actually happen in this film – her work here definitely shows signs of improvement, no matter how small they may be. It’s one of those movies that has such a heavy subject matter that it’s really designed to watch only the once (because who would want to revisit a film that depicts such a dark moment in human history a bit too realistically?), but it’s also one that leaves you feeling glad that you did see it just the one time, because it’s a completely serviceable and occasionally powerful drama by a flawed director who, if she carries on at this rate, could rise above her past failures just fine.

Though it is definitely far better than By The Sea, that much cannot be denied.

First They Killed My Father is a bold depiction of the Cambodian genocide by director Angelina Jolie, who despite retaining some of her past flaws here like a sluggish pace, shows promising signs that she can competently tell a real-life tale with real grace and authenticity without taking away any of its focus.