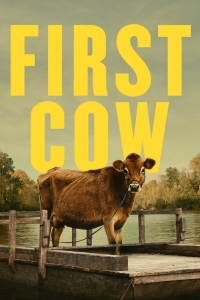 BASICALLY…: In the Old West, a cook (Magaro) strikes up a friendship with a Chinese immigrant (Lee) when they collaborate on a new business together…

This review of First Cow was conducted as part of the Glasgow Film Festival 2021.

Budgeted at just over $2 million, Kelly Reichardt’s First Cow is about on par with how much her previous films Certain Women, Night Moves and Meek’s Cutoff were made for, and yet it is perhaps the single most ambitious film of her career thus far.

A historical tale of friendship and the American dream, told during a time when both were scarce for anyone not in wealth or power, Reichardt’s film manages to tell a simple, endearing story that is both universal and, in its own unique way, rather charming. There’s plenty to admire about it, from the writing to the filmmaking, which will certainly win over fans of this director’s work as well as some intrigued newcomers to her unique style of lyrical visual storytelling.

The film mostly takes place in Oregon during the early 1800s, where a cook named Otis Figowitz (John Magaro) – or “Cookie”, as he’s known to be called – is accompanying a group of trappers through the wilderness. Along the way, Cookie comes across a Chinese man named King-Liu (Orion Lee), who is fleeing a Russian party after killing one of their men; showing kindness, Cookie hides King-Liu and helps him escape. After later reuniting, the pair strike up a friendship and soon decide to go into business together, which involves stealing milk from the settlement’s only cow – owned by the wealthy Chief Factor (Toby Jones) – and using it to make their instantly-popular line of oily biscuits. However, it isn’t long before the pair find themselves in hot water over their deceptive business practises.

As ever with a Kelly Reichardt film, it is a very pleasant film to look at; the filmmaker’s regular cinematographer Christopher Blauvelt captures some lovely visuals of the Oregon wilderness, where vast greenery and sturdy trees form a good chunk of the atmosphere, and just about everything from the inside of makeshift bars to muddy pathways is given a delicate and old-fashioned look to it, all within a grainy 4:3 aspect ratio. Some scenes will be extended for longer than they possibly need to be just so it can silently bask in the atmospheric environment around it, often with minimal or even no dialogue and simply letting the visuals speak for themselves.

However, First Cow isn’t merely one of those style-over-substance movies, either; Reichardt, along with co-writer Jonathan Raymond – both of whom here adapt Raymond’s own novel The Half Life – have put a lot of thought and care into this story and its characters, giving both of them a smooth and easily understandable edge that make them incredibly palatable. It is a very simple story about these two friends who decide to make their own way in the world via whatever resources they can gather, and the beauty of how it is executed here lies in how there are no unnecessarily complicated add-ons nor anything that would compromise the integrity and the overall heartfelt nature that it intends. It’s incredibly easy to see from their first meeting why both Cookie and King-Liu would warm to each other, and as their friendship grows, so does their mutual respect and gratitude toward one another; they really do seem to care about one another, and because both the performances by John Magaro and Orion Lee are endearing and sympathetic enough, you are heavily rooting for these two to succeed or, at the very least, make it out with their lives still intact.

Some scenes tend to fall into the usual trap that Reichardt occasionally finds herself in, where numerous scenes either go on for just a bit too long or seem to lack any proper resolutions to certain arcs or events, but they never kill the overall vibe it gives off. This is a rather lovely movie overall, filled with a sweet warmth and plenty of dazzling visuals, and very easy to appreciate whether or not you’re a fan of this director’s previous work.

Even with its very limited number of flaws, which mostly just fall into line with my views of Kelly Reichardt’s filmography as a whole, First Cow is a pleasantly absorbable historical drama that’s simple but satisfying viewing for anyone looking for a nice comfort film to put on at home. Now, that’s something nice to ponder over until the cows come home.

First Cow is a pleasant and nicely simplistic historical tale of friendship and achieving the American dream, told with gorgeous visual lyricism by director and co-writer Kelly Reichardt, and putting forward some easily likeable characters in this easy-to-access narrative that is palatable for any audience member, whether they’re a fan of this filmmaker or not.

First Cow is currently scheduled for a UK cinema release on 28th May 2021 (as of publication).