Finding The Way Back (Review)

Finding The Way Back (Review) 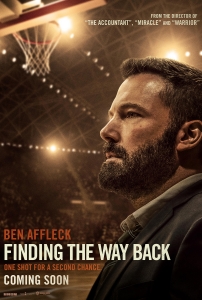 Ever heard the one about the struggling sports hero, who was once a promising athlete but had since fallen down on his luck, only to score a position coaching an underperforming team and then guiding them to unexpected victory? Of course you have, because so many movies like The Mighty Ducks, The Bad News Bears, Coach Carter, Friday Night Lights, Hurricane Season and countless others have run that particular formula into the ground.

The real question, though, isn’t about which clichés a movie of that type will adopt, but about how they end up using them to tell a story that’s certainly not new but is still able to strike an emotional chord. Finding The Way Back is one such movie where, again, the ingredients are familiar but they’re handled in such a profound and moving way that you honestly don’t care about the fact you’ve seen it all before.

The film, directed by Gavin O’Connor, follows Jack Cunningham (Ben Affleck, reuniting with the director after 2016’s action-thriller The Accountant), once a promising high school basketball superstar, but now works a lowly job as a construction worker, and spends most of his free time drinking heavily in his local bar. To his surprise, his former high school approaches him with an opportunity to coach their basketball team, which has seen some heavy losses since Cunningham’s departure, and soon Jack begins whipping his young team into shape and getting them further towards success than they’ve seen in years. However, his personal demons still haunt him, and it’s not long before they collide with his promising new position.

There are no false pretences that this is something truly fresh; it simply is one of those high-school sports drama like the ones I listed earlier, and it does cover almost ever major trope in the rulebook, from the underdog team, to the coach with the personal demons, to the star athlete who is having trouble at home, all the way down to the crucial final moments of the game where every second counts. However, what O’Connor manages to inject into the scrawny bones of this script is a heavy dose of passion and heart, reflected by the sincere nature of the performances and the editing which keeps it at a nice, smooth pace so that the audience can absorb every little plot development much more naturally. It lends the film a brazen confidence that seems to be aware that it’s taking on a familiar formula, and admirably runs with it instead of calling out the clichés it’s consciously using, giving it a certain level of charm and sincerity which helps to make it feel a little more fresh despite being anything but.

It should be made crystal clear, though, that the film’s biggest asset is through and through Ben Affleck. His performance is a career-high in so many ways, whether it’s his ability to make you both root for and against this guy – for him, because he shown to be clearly good at his job and has a way of reaching his team members to deliver the best play possible on the court, and against him, because his hardcore alcoholism is causing him to become a complete shell of himself and push away those who are trying to help him the most. Affleck truly nails the belligerent nihilism of this character and his increasingly dangerous habits, which he owes in part to his own personal experiences; the actor, like his character in the movie, has a long history with alcoholism which has ruined certain relationships with close ones, and according to reports this role was highly therapeutic for him as he started shooting the very day he exited rehab following a relapse, and was even accompanied to set by a sober coach. Even without the knowledge of that art-imitates-life backstory, this is soul-bearing stuff from Affleck, who makes you feel every emotional strain in his body from his quiet moments of sorrow to his raging fury on the court whenever the referee makes a fundamentally damaging decision. He is truly spectacular in this movie, and it’s certainly one of his strongest performances in quite some time.

As for the rest of the movie, you should know by now if this is the kind of movie you’d want to willingly sit down in front of. If you are sick to death of these types of sports movie clichés and want a new spin on the formula, this isn’t going to win you over; if you enjoy these kinds of movies because they stick so closely to the familiar beats, then you will have just as good a time as you would with any other; or if you’re like me and are eager to recognise that a movie like this has formulaic qualities but makes up for it in other important areas such as performance and overall filmmaking, at the very least you’ll be glad that you saw it. No, it isn’t the most original film in the world, but Finding The Way Back isn’t afraid to dive deep into some heavy topics and some emotional drama in such a bold, passionate and heart-wrenching fashion, which definitely elevates it above some of the more standard examples of this type of film. Add on top of that a truly astonishing and therapeutic performance from a lead actor who, like his character, has been through some rough patches but is back to redeem himself, and you have yourself a highly watchable, if familiar, inspirational drama.

Finding The Way Back doesn’t stray too far from the familiar clichés of the inspirational sports movie drama, but some passionate direction by Gavin O’Connor, and especially an outstanding and highly therapeutic leading turn from Ben Affleck, makes this a worthwhile watch even if you’re sick of seeing the same tropes over and over again.

Want to decide what the movie’s like for yourself?
Check out Finding The Way Back streaming links
via