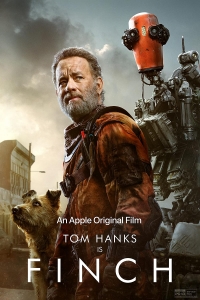 BASICALLY…: On a post-apocalyptic Earth, an ailing inventor (Hanks) makes plans for his eventual demise…

Tom Hanks, an adorable dog, and a robot with the innocence of a child: that’s really all you need to survive the apocalypse, and Finch – formerly titled BIOS before it moved from Universal Pictures to Apple TV+ – knows it all too well.

The sci-fi drama, from TV director Miguel Sapochnik (of Game of Thrones, House and True Detective among others), is a post-apocalyptic charmer with a sizeable heart and a simple, yet utterly endearing, story about what it is to be human at the end of its civilisation. Components may certainly strike as familiar to viewers, but ultimately its good nature wins out in the end.

Set in a future where the ozone layers have become so depleted that simply standing out in the sun will burn your skin off, mankind has effectively been wiped out with cities now covered in dust and unfathomable heat. The only apparent human survivor is a man named Finch Weinberg (Hanks), a scientist who has managed to stay safe, to a point, in a bunker where his only companion is a loving dog named Goodyear (played by a canine actor named Seamus). However, Finch is slowly dying from the constant exposure to radiation, and he has begun working on a contingency plan to ensure that Goodyear will be looked after following his death: he constructs a humanoid robot named Jeff (performed via motion capture and vocal performance by Caleb Landry Jones), who is filled with encyclopaedic knowledge but with the mental capacity of a curious child, which proves both handy and also unhelpful when an oncoming storm forces the three of them to drive across the country in a makeshift RV towards San Francisco.

Effectively a three-hander between Hanks, the dog and the CGI robot, Finch is focused enough on these characters to give them plenty of lovable moments and touches of irresistible emotion. Hanks, who seems to have been genetically altered by scientists to be the most likeable actor in Hollywood, is on strong form here in the straightforward title role, and he has great chemistry with his furry and mechanical co-stars. Seamus the dog is a very competent canine actor, and easily wins you over with his adorably defensive personality; he is, indeed, a good boy. Then there’s Jeff, a CG creation brought together by some rather excellent effects work and a firmly committed performance by Jones; despite his childish tendencies, the character never becomes annoying or one-dimensional because he is written and acted with real passion and, yes, humanity that you also root for him as much as you do Hanks. Together, all three make an effective on-screen team, and you genuinely enjoy their relationships as they develop throughout the course of the movie.

The story is pleasingly simple – it’s basically a road trip movie in a world where the apocalypses in both Mad Max and WALL-E collided with one another – and director Sapochnik and writers Craig Luck and Ivan Powell keep the plot at a reasonable pace to ensure that the characters have enough breathing space to develop. It’s not the most unique-looking apocalypse ever put on film, and you can definitely spot where the filmmakers got some of their most striking visual references from (beyond Mad Max and WALL-E, there are nods to other post-apocalyptic tales like A Boy and His Dog, I Am Legend and The Road), but the script is cute and cuddly enough to serve as a warm blanket of comfort, even when it occasionally threatens to steer hard into saccharine territory (which, given that Robert Zemeckis is a producer and Steven Spielberg’s production company Amblin is one of the logos in front of the movie, shouldn’t be too surprising).

It is a likeable movie, with three charming turns by man, dog and machine that drive the simple but sweet story to a natural conclusion, and may also make you shed a couple of tears along the way. No matter what, though, this is perfectly serviceable end-of-the-world entertainment.

Finch is a likeable and simply sweet post-apocalyptic sci-fi tale, featuring three endearing lead turns by Tom Hanks, Seamus the dog, and a well-crafted CG robot, who more than carry the occasionally familiar and rarely saccharine story all the way.