Fighting With My Family (Review)

Fighting With My Family (Review) 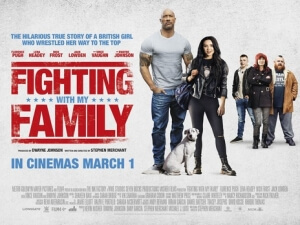 BASICALLY…: Paige (Pugh), an aspiring wrestler from a family of wrestlers in Norwich, flies to the States to train for a role in WWE…

When you think of the tough, muscular and assertive world of the WWE, the first person that comes to mind as a writer and director for one of the organisation’s leading female champions Paige is almost certainly not going to be Stephen Merchant.

The 6’7” tall, lanky and unapologetically British personality is a striking contrast to the image we all have in our heads about the biggest names to ever emerge from the WWE, but as Fighting With My Family sets out to prove, looks can be deceiving as he’s managed to make a film about a wrestling champion that’s full of heart, humour, charm and entertainment value – in other words, it’s quite possibly the perfect WWE movie ever made.

The film follows Paige – real name Saraya Bevis (Florence Pugh) – as she grows up in a Norwich family of professional wrestlers, including her father Patrick (Nick Frost), her mother Julia (Lena Headey), and her older brother Zak (Jack Lowden). One day, she and Zak receive a call from WWE coach Hutch Morgan (Vince Vaughn) who invites them to a try-out, but in the end only Saraya is picked to come and train in Florida, leaving Zak heartbroken that his lifelong dream has come to a crashing halt. As Saraya – who later adopts the name Paige from a character from the TV show Charmed – heads to Florida, where she quickly finds that she doesn’t entirely fit in, she also struggles to reconnect with her embittered brother who has begun to resent his more successful sister.

Merchant makes his solo writing and directorial feature debut with this film – he had previously co-directed and co-written the 2010 film Cemetery Junction with regular collaborator Ricky Gervais – and right away, you can feel his trademark eccentric sense of humour seep its way into the dialogue, with an opening scene that sees the younger versions of Saraya and Zak fighting over the TV remote and their parents stepping in – only for them to give them pointers on how to hurt each other properly. The light touch of comedy throughout helps make this a very fun adventure, as throughout you’re right there laughing along with this family as they playfully tease each other as loving families tend to do, and also with the little quirky things that happen along Paige’s journey to the big leagues, including a couple of run-ins with a cameoing Dwayne Johnson – an executive producer on the film – who despite heavy prominence in the trailers is really in the film for a couple of scenes at most. It’s often a very funny movie, with Merchant inserting little quips here and there that really elevate the scene and leave you with a big old smile across your face, and he directs it with a real sense of energy and passion that you would normally see in an actual WWE match.

He’s also surprisingly capable at handling the more dramatic moments of the story, including the heartbreaking arc that Jack Lowden’s Zak has to go through once he realises that the very thing he’s been working towards his entire life has rejected him for good. Lowden is fantastic here, as you really feel his heart just being smashed into a million pieces just through the simplest of expressions or line deliveries, and as much as you don’t agree with how he takes out his frustrations you can still understand what he’s going through and why he’s doing what he does. If Lowden represents the film’s broken heart, Florence Pugh assembles it back together through the power of her natural charm and charisma that makes her Paige an enjoyable and loveable lead to follow; as she did in Lady Macbeth, she proves that she is more than able to carry a movie like this with no problem whatsoever, and she has the benefit of strong support – Nick Frost and Lena Headey are a lot of fun as the supportive parents, and even Vince Vaughn is tolerable as the drill sergeant that trains Paige and her peers – as well as a strong script and director to guide her through it all.

Said script sees Pugh’s character deal with issues of her own, such as fitting in with her more attractive American contemporaries, many of whom claim to be former models, which sees her dying her goth-black hair blonde and tanning her pale skin, to a point where she looks like a creepy Kardashian by way of The Stepford Wives (especially when she returns to Norwich, where she sticks out like a tanned thumb), which feels like a subtle jab at how American society views beauty and how these sorts of extremes betray the very essence of who we actually are as human beings. It fits right along with the film’s universal message of being yourself, which is certainly corny and rather unoriginal, but this film still sees the eternal appeal of such a message and allows it to shine through while also providing one hell of an entertaining experience for the audience. Merchant also cleverly allows himself the opportunity to subvert certain clichés you’d usually find in a sports biopic – some of the women that Paige competes with are set up to be antagonistic bullying figures, but they never end up being as such and are instead actual people with their own goings-on outside of the wrestling game – and although some of them do find their way into the crowd-pleasing third act, you’re still thoroughly entertained and on board with these characters to cheer along with the in-movie crowds once Paige finally steps into the ring.

It’s a very strong wrestling movie that anyone, whether or not they’re into wrestling at all, can watch and enjoy without feeling too guilty afterwards, which should be enough to convince any non-fan of the sport to give it a try.

Fighting With My Family is a very entertaining, and often very funny, wrestling movie that sees writer-director Stephen Merchant insert his quirky sense of humour into an uplifting and crowd-pleasing story with excellent performances including from rising star Florence Pugh and an outstanding Jack Lowden.