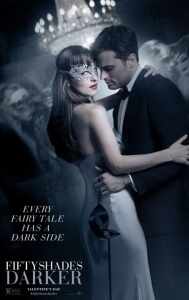 BASICALLY…: Anastasia Steele (Johnson) is wooed back into Christian Grey’s (Dornan) thrilling but dangerous lifestyle, and… yeah, that’s pretty much it…

One of the common criticisms of 2015’s adaptation of Fifty Shades of Grey was that much of the unintentional humour from EL James’ original book was lost in translation, with the whole “inner goddess” monologues – the primary source for all its mockery – omitted and replaced with not-quite-as-funny scenes of its two romantic leads moping and staring at each other. While it wasn’t a good movie by any means, it did at least try to elevate itself by being slightly interesting from a visual standpoint – it failed, but at least it looked fairly nice.

That is something that absolutely cannot be said about Fifty Shades Darker, the sequel based on the second book in James’ trilogy, which doesn’t even try to look interesting in the slightest. Its visuals, much like the rest of the movie, are entirely on autopilot and effortlessly, oh so effortlessly, dull and boring; literally everything, from the acting to the direction to the music to the cinematography, never attempts to elevate its status as a big-screen version of D-grade smut, but it can’t even muster up the courage to be at the very least entertaining. Never before has on-screen sex had the ability to put you to sleep rather than tantalise you, but that’s just one of the many ways Fifty Shades Darker manages to surprise you.

The plot – a phrase used in the loosest of terms, as this film has absolutely no plot – picks up from last time, when Anastasia Steele (Dakota Johnson) is trying to move on from her relationship with the domineering Christian Grey (Jamie Dornan), but not ten minutes into the movie they’re back together, almost as if that entire break-up was completely pointless to begin with. From there, pretty much nothing happens for its entire 118-minute runtime, except that it follows a clumsy pattern of filling 20 or so minutes of dull scenes expanding on their “relationship”, and then a sex scene happens. Along the way, things do occur, from a masquerade ball that reminds you of how Eyes Wide Shut is a far better movie than this, to the introduction of Eric Johnson’s rival romantic character named Jack Hyde (geddit? Cos his personality is like Jekyll and Hyde? Did you get that, audience? We really want to make sure you understood that connection, because I, the great EL James, am so clever and subversive you’d never pick it up otherwise! UGH.), but all of these things are basically vignettes to somehow fill this running time up to disguise the fact that there is absolutely nothing of interest going on here.

Glengarry Glen Ross helmer James Foley takes over from Sam Taylor-Johnson as director, while James’ husband Niall Leonard replaces Kelly Marcel as screenwriter, and right away you can tell that any attempt by these new replacements to salvage the horrendous source material on-screen is non-existent – but even worse, they couldn’t even make it a glorious failure. Leonard ensures that almost nothing is exciting or wrapped up in any kind of satisfying way, while Foley is responsible for making it all look and feel as interesting as a fart in a swimming pool. Together, they form the criminal mastermind duo behind this bafflingly boring mess, which fails to be exciting even to fans of the books, because it’s not sexy, not funny (even unintentionally), and insulting to audiences’ levels of intelligence due to a narrative so full of holes you could poke more than just string through it.

Foley and Leonard fail to make this new entry any more thrilling than the last one – and keep in mind, the previous film wasn’t thrilling in the slightest – and, along with a completely forgettable score by Danny Elfman, cinematography that looks like they composed it while blindfolded, and a soundtrack made up of terrible pop songs trying their hardest to outdo the previous award-nominated tunes by The Weeknd and Ellie Goulding, end up making just a terrible, bafflingly awful film on its own. You really have to feel sorry for Dakota Johnson and Jamie Dornan – not their characters, but the actors, who are stuck with this terrible material and clearly hating every single moment they have to film this dreck. They’re both talented actors in their own right, but here they seem to have had all charisma and enthusiasm sucked out of their systems and forced to deliver such classic lines as “you’re distracting me with your kinky fuckery” with a straight face. Once again, they have no chemistry whatsoever and fail to convince anyone in the audience that they are a legitimate on-screen couple (hell, Kristen Stewart and Joe Alwyn had far better sexual chemistry in Billy Lynn’s Long Halftime Walk, and they played siblings in that film), not to mention that their characters continue to be dense and thoroughly unlikeable, particularly Dornan’s Grey whose domineering and creepy behaviour resembles that of a serial killer more than a romantic lead – maybe that’s why people love him so much more on The Fall, because that’s exactly what this character should have been all this time.

Fifty Shades Darker somehow manages to be even worse than the last film, with terrible writing and direction that utterly fails to elevate the awful source material to something even remotely interesting, and is a completely dull waste of time.