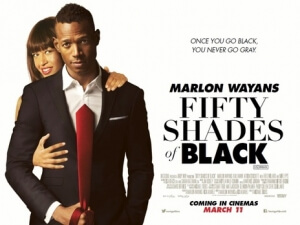 BASICALLY…: Just look at the title and GUESS what it is they’re exactly parodying this time…

Parody films have declined heavily since the days of Airplane!, Young Frankenstein and the Hot Shots films, and now we’re getting unfunny and incompetent messes like Epic Movie, Meet The Spartans, The Hungover Games and others that simply take their targets and do nothing intelligent with them, unless you count fart jokes and people getting hit in the groin as high-class humour.

Not only does that tradition live on in Fifty Shades of Black, which parodies the very first thing that comes to your mind after reading that title, but it sets the bar even lower than before just based on how terrible it actually is.

It’s the latest product of its type from writer-producer-star Marlon Wayans, who began the recent dip in quality within parody films by co-creating the Scary Movie franchise and has now come full circle with this crap. Wayans is Christian Black (geddit? Cos he’s…. sigh, that’s the kind of humour they’re aiming towards) who, like in the film they’re meant to be making fun of, sets his sights on the unassuming Hannah Steele (Kali Hawk) and introduces her to his insane way of life, and that’s before he even shows her his version of the Red Room.

Much like the Twilight phenomenon, Fifty Shades of Grey is one of the easiest targets in pop culture, so even though it’s been just over a year since the release of that film the idea of making fun of the overall story, characters and especially the writing is old news (they even did a parody of the book in 2013’s Scary Movie 5, and it hadn’t even been optioned into a film by that point!). You’d have to find a whole new angle on the satire to make something like this work after there have been so many others like it, but Wayans just sticks to what he knows best: gross-out gags, laughing at women getting hurt and abused, dated topical references, racial stereotypes, and random sequences that rip off other unrelated movies (in this one, we are treated to out-of-nowhere riffs on Whiplash and Magic Mike that seems to go on forever). Because of all this repeatedly infantile and unfunny humour, the film completely fails at doing what it was meant to set out to do and just gets lost in doing the same routine without actually trying to find anything clever to say.

You also have to wonder what woman had scorned Wayans in the past for him to treat the main female lead in this film – in fact, most women with speaking parts, but her in particular – with such disdain and scorn. Hawk, as this movie’s incarnation of Dakota Johnson’s Anastasia Steele, is repeatedly the butt of many of the “jokes” that it has to offer, from verbal abuse – she is told several times that she’s ugly and smells awful, without nay a hint of a punchline – to physical torment – she gets laughed at constantly by Wayans for being “dumb”, and is hit by several items ranging from shovels to elevator doors – to pure embarrassment – she is looked at disgustingly for having an “outie” belly button (which they never show her having again in the rest of the movie) and for having really hairy legs (cos y’know, Johnson had a little bit of leg hair in that other movie, so let’s have her be a bloomin’ sasquatch in this one! Comedy gold!!!). It’s never funny, and it comes across as more mean than it does truly satirical; you have to feel sorry for Hawk, who we feel could actually be a fine comedic actress if she was given far better material than this.

The film is filled with such puerile and childish humour – to demonstrate this, allow us to reference a scene where Wayans shows us his pulsating “blue balls” before putting them away and carrying on the scene as normal – that a later gag which shows him “torturing” Steele by actually reading a copy of Fifty Shades of Grey and pondering “who wrote this, a third grader?” is in so many ways a case of “those in glass houses…”. No gross-out gag is left unturned, from stained underwear to micro-penises, with some jokes and even characters not even making sense (every so often, there is a large white woman who shows up acting and dressing like a black woman, which is almost never elaborated on and you have to wonder if this was just a case of unchecked racism or something unidentifiable). Everything in this movie is pretty much what you expect it to be, just done a whole lot worse than you’d think (not that anyone was really expecting this to be good anyway, but still…).

The real question, however, is whether or not Fifty Shades of Black is, in our opinion, worse than Grimsby? Here’s the thing: this film was made for $5 million, whereas that film was made for more than triple of $5 million, so tell us: which is the bigger waste of opportunity? Yeah, that’s what we thought.

Don’t mistake us, though: this is a bad movie. It’s a REALLY bad movie. But Marlon Wayans hasn’t had the kind of success that Sacha Baron Cohen has, so against all the odds, he just barely gets a pass on this. But JUST barely.

Fifty Shades of Black completely fails to find anything intelligent to say about the source material it is meant to be parodying, and falls back on the typical Wayans humour of gross-out gags, misogyny and random movie references that would make even Family Guy feel embarrassed.