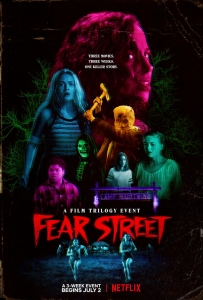 BASICALLY…: In 1994, teens in the town of Shadyside are stalked by a malevolent, historical presence…

This has been quite the week for slasher movies, hasn’t it? You not only have Freaky finally making its UK theatrical debut, but also Vicious Fun causing a bit of ruckus on streaming platforms, and now a slightly more ambitious – at least, in concept – slasher trilogy kicks off, with the first part in director Leigh Janiak’s three-part adaptation of R.L. Stine’s Fear Street series debuting on Netflix (with parts two and three to follow over the next couple of weeks).

This first entry, taking place in 1994, certainly feels like a slasher movie from the 90s, but your enjoyment of it may depend on your overall tolerance for ones like Scream or I Know What You Did Last Summer, which have their fans but also their fair share of detractors. Either way, Fear Street Part 1: 1994 – to give this film’s official title – sets things off at a reasonable pace, and keeps itself busy with elements of that time period, for better or worse.

In this titular year, we are introduced to the town of Shadyside, a lowly counterpart to the much more affluent neighbouring town of Sunnyvale, and where every year there has been at least one gruesome murder committed by different people under seemingly separate circumstances. Our main characters are a group of high school students, including Deena (Kiana Madeira) who’s just gone through a bitter break-up with her girlfriend Sam (Olivia Welch), and her friends Kate (Julia Rehwald) and Simon (Fred Hechinger) along with Deena’s nerdy younger brother Josh (Benjamin Flores Jr.). They find themselves stalked by yet another one of Shadyside’s masked killers who will not seem to stop until blood has been spilled, and so they must figure out how to survive the night while also figuring out what exactly is causing so much grisly death in their town.

Don’t expect this film to give concrete answers about certain things (it wouldn’t be a very eventful trilogy if it did). It does, however, set up some fun concepts that are bound to get even freakier as this series goes on, including an interesting lore about this town and its history, as well as its beef with holier-than-thou neighbouring Sunnyvale; light themes of class worm their way through here as Shadyside has such a stigma surrounding it that people like Sam, in a move that sparked said break-up between her and Deena, are moving away in droves to the better(?) town where there are more possibilities than this less-desirable place. It also introduces us to how the killer – and possibly others like them – functions, which introduces a decisively supernatural element that allows for a few more grisly ways to subdue folks in often gory fashion, and ups the game somewhat as it becomes apparent that this killer might be harder to get rid of than first thought. It’s all competently set up by director Leigh Janiak and co-writer Phil Graziadei, who both have some fun with a lot of classic slasher movie tropes, especially ones that were most prominent in the 90s, and keep most things entertaining enough in between long stretches without many grisly kills (and when they come, by the way, they can be both gory and even a little creative).

However, Fear Street Part 1: 1994 is bound to give a headache to those who perhaps have a lower tolerance for 90s slasher movies as a whole, and even as someone who wasn’t quite old enough to experience them around that time, I could somewhat sympathise with those who perhaps weren’t into ones like Scream as many others were. There are a lot of 90s slasher tropes that are resurrected here which only remind viewers why that decade wasn’t an especially strong one for horrors of that sub-genre, from an imposing soundtrack made up of typical track choices (in one scene, it switches from Cypress Hill’s “Insane in the Membrane” to Radiohead’s “Creep” within seconds of each other), to one-note characters who tend to irritate more than actually serve much of a purpose. Some characters, like Kiana Madeira’s Deena, can be difficult to warm towards at first because they display far too angsty and bitter behaviour that even high school-age people around that time might not have wanted to hang around with, while there are figures who only serve as walking time-bombs just waiting to get killed off. It’s basically a lot of what you might have seen in films like Scream or I Know What You Did Last Summer, which in fairness to director Janiak it does seem like she did her homework when it comes to emulating certain characteristics from that era of slasher cinema, but it doesn’t make it any less frustrating when you want to be entertained by the death scenes but have to endure some intolerable stuff before we even get to that.

I can see some people being easily turned off by its overtly-90s personality, especially if you weren’t so hot on it during that exact time period, but if you’re willing to look past some of its more obnoxious elements, Fear Street Part 1: 1994 does have some decent slasher movie moments. Some of the kills, as mentioned, can be quite fun to watch, as can some of the differing personalities surrounding a number of deadly foes, and depending on your attraction to the main characters as people, there are a fair amount of moments with each of them that will probably give you what you’re hoping for when it comes to their empathetic situations. There is also some entertainment to be had in how the filmmakers have set up this vast-reaching mystery, and where it’s going to take us next; we already have an idea of what to expect in next week’s entry (look out for a brief teaser for it at the very end of this film), and hopefully it will continue the decent entertainment factor and clear respect for the slasher movie genre.

Maybe, too, it will also be significantly less 90s than this call-back to a very 90s era of frustrating slashers, which depending on your love or hate for the decade may well be something to look back on in fear.

Fear Street Part 1: 1994 sets up an entertaining trilogy of slasher movie call-backs, and establishes an interesting history waiting to be explored in future instalments, but this movie’s heavy focus on a lot of 90s slasher movie tropes may irritate viewers who don’t remember that decade of horror too fondly.