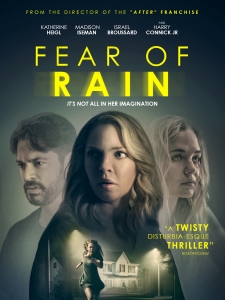 BASICALLY…: A teen with early onset schizophrenia (Iseman) becomes convinced that her neighbour (Bondurant) is holding a young girl captive…

After the horrific portrayal of mental health in Sia’s Music, something so sensationalised and ridiculous as Fear of Rain might as well be One Flew Over The Cuckoo’s Nest by comparison. But make no mistake, writer-director Castille Landon’s thriller and sort-of (?) horror is still a very silly movie with plenty of outlandish moments and a few very obvious twists – however, unlike Sia’s monstrosity of a feature film, there are at least a few nice things to say about it.

For one, this is practically performance art for its lead actress Madison Iseman, best known to viewers for the two recent Jumanji movies and other franchise fare such as Annabelle Comes Home and Goosebumps 2: Haunted Halloween, who here delivers a very manic and firmly committed turn that easily could have gone so wrong (and, honestly, the performance almost does skirt dangerously close to that edge), but because she is a competent enough actress she is able to reign it in just enough to stay believable. As wild and bonkers as the movies gets, Iseman manages to carry it through the rougher patches and stands out in a film where she quite frankly never needed to.

Iseman plays Rain, a teenage girl who suffers from early onset schizophrenia, which causes her to experience strong hallucinations that play with her fragile mind. She is cared for by her parents, Michelle (Katherine Heigl) and John (Harry Connick Jr.), who regularly remind her to take her medication – which Rain frequently foregoes because she feels it blocks her artistic ambitions – and who appear to be rather distant from each other as a result of their daughter’s condition. At school, Rain fares no better, ostracised by her judgemental classmates and under the careful watch of her English teacher and next-door neighbour Dani (Eugenie Bondurant), until she meets friendly new kid Caleb (Israel Broussard) who doesn’t seem to mind her manic moments. Soon, though, Rain becomes more and more convinced that Dani is hiding a disturbing secret next door – from what she can see, a young girl appears to be screaming for help in her childless teacher’s attic – but because of her illness she struggles to get anyone to believe her, forcing Rain to confront her warped sense of reality and determine what is real and what isn’t.

Essentially the love child of Rear Window and A Beautiful Mind, this movie is intriguing in theory, but in practise turns out to be way more entertainingly batty than you might be thinking. Director Landon’s weird visual style – lots of floaty camera movements and wide-angle lens close-ups like it’s a Terry Gilliam film – leaves you intentionally disorientated, and makes it just as difficult to separate fantasy from reality as it is for our unreliable protagonist. Landon certainly expresses some heavy ambition in her filmmaking, and it shows in scenes that are often ripe with saturated colours and quick editing which further puts you into that fragile mindset. It’s definitely not a boring film to watch, because it constantly throws at you some fascinatingly bizarre imagery that keeps it thoroughly entertaining, despite itself.

That’s because Landon’s script is, to be frank, not very good. Its handling of themes like mental illness is often very heavy-handed, with some hilariously on-the-nose dialogue that only skims the surface of this rather complex issue (although, again, it’s not like it’s the worst on-screen portrayal of mental health so far this year). There are also twists in the movie which feel very obvious as soon as certain characters show up and are framed in certain ways that are unmistakably suspicious, and the third act goes wildly off the rails in an overdone attempt to blend both the psychological and human-based thriller aspects together. It feels like a script that wants to have it both ways, by being both a sensitive (to a point, anyway) portrayal of juvenile mental illness, and a traditional Hitchcock thriller, but when mixed together in a blender the taste is rather odd, to say the least.

As ridiculous as Fear of Rain is, and I do want to reiterate how silly this movie actually is, it’s hard to fault the sheer level of effort that its cast and crew have put into it. Aside from Iseman, who really does deliver an outstanding performance here, you have actors like Katherine Heigl, Harry Connick Jr. and Israel Broussard who are selling this utterly weird material near flawlessly, while the director makes the most out of her own wildly inconsistent script with some fascinating visuals that a low-key thriller like this probably never would have gotten otherwise.

With that in mind, I really can’t even say I thoroughly disliked Fear of Rain, because it was at least entertaining enough to respect, regardless of its overwhelming stupidity.

Fear of Rain is a silly but entertaining thriller, because while writer-director Castille Landon’s surreal vision is bizarre enough to respect, in addition to some of the outstanding performances from its equally committed cast including lead Madison Iseman, its wildly inconsistent script merely skims the surface of heavy topics like teenage mental illness, pushing instead for obvious twists and a bonkers third act.

Fear of Rain is now available to rent or buy on digital platforms, including Amazon Prime Video.