Fatima (Review) – Not A Terrible Religious Movie, But Not A Great One Either 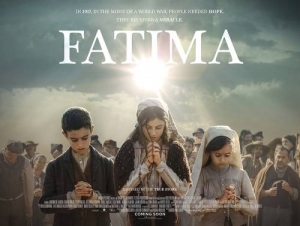 BASICALLY…: After three young shepherds in Portugal claim to have seen the Virgin Mary, it inspires a wave of inspiration and controversy…

Perhaps it’s the troubling nature that’s accosted a lot of faith-based movies as of late – box office hits like God’s Not Dead and War Room, among others, have garnered criticism for promoting very offensive and decidedly non-Christian messages – but Fatima really feels like a diamond in the rough.

The historical religious drama, from director and co-writer Marco Pontecorvo, is a film that actually does promote a decent Christian message, and competently tells a story that holds dear to a lot of people’s hearts, which right away puts it above some of the other, lesser examples listed above. However, for all of its good intentions, Fatima still doesn’t aspire to be much else in an artistic sense, plodding along at a standard and inoffensive pace, but leaving little impact on its general audience.

Primarily set in 1917, in the small town of Fátima, Portugal, we see how young shepherdess Lúcia (Stephanie Gil) and her similarly-aged cousins Jacinta (Alejandra Howard) and Francisco (Jorge Lamelas) are one day visited by a mysterious woman who they believe to be the Virgin Mary (Joana Ribeiro). The children’s reporting of their vision prompts concern and anger from their families, their community and even the local government, particularly the mayor Artur Santos (Goran Višnjić), who all think that the young children are just playing tricks and taking the Lord’s name in vain. However, when word spreads about the Virgin Mary’s visit, thousands of Christian pilgrims descend upon the town and look to Lúcia and her cousins for guidance as they continue to communicate with the religious figure.

The movie also has a wraparound segment, taking place in 1989 where a much older Lúcia (Sônia Braga) is relaying her story to Harvey Keitel, who plays a fictional writer who so happens to not be of any faith. It should be said that there is no need for this to even be a part of the film, as it adds nothing to the actual story and could easily have been cut out to reduce the slightly overlong running time, but it seems to only be there just so it can give its two most high-profile actors something to do, even if it’s just sitting around and talking to each other the whole time.

However, even if the whole movie was set in the past (which it technically is, given how that wraparound bit is in 1989, but you get my point), there would still be a fair number of pacing issues that it needs addressing. It repeats a lot of scenes where the children are being scolded for spreading what are presumed to be lies about their vision, and where other characters are debating back and forth on whether it’s an actual visitation or the work of the Devil or even just someone playing a prank on these young kids. There’s only so much drama you can mine from these kinds of scenes, and by the time you’ve seen the third straight scene of such you’re starting to realise that there isn’t much material left to work from.

Because it moves so slowly, with a seemingly endless cycle of rehashed scenes, it makes the film feel a lot longer than it actually is, for a story which has the potential to work within such a time-frame. However, it opts for a considerably safe and familiar structure, which just leaves you counting down the minutes until the next expected plot point can come into fruition; when a character develops a cough, you’re instantly anticipating when it’s going to turn into an even bigger problem for this person, while the villain is so cartoonishly evil in his methods to silence the kids – it doesn’t help that Goran Višnjić, with his slim figure and slimy moustache, looks incredibly similar to Sam Waterston’s equally evil character from Heaven’s Gate – that he hardly seems like a real person, and more like a construct by the writers to give the audience a faithless avatar to side against in some of the film’s strawman debates over religious freedoms.

It’s not an overall terrible film, though; it’s well-made, the acting’s fine, and has some decent cinematography to its name, and when it does focus on the spiritual message that the Virgin Mary appears to give, it’s good-natured and caring as the best examples of Christianity can be. However, it’s also not something that will be remembered by its viewers, because it’s perhaps too standard of a storytelling format with too many time-consuming digressions to become truly invested, nor does it really contain anything memorable for it to stand out, in the same way that, say, The Passion of the Christ did with its bloodthirsty violence. Really, Fatima is a religious movie that serves its purpose, and then goes no further, which to some may be all that they need, but for others hoping for something a little more outstanding, it’s too standard to truly call a miracle.

Fatima is a standard historical religious drama that achieves a number of its good intentions, but is worn down by a sluggish structure filled with unnecessary and overlong padding which makes it feel longer than it actually is.

Fatima is now showing in cinemas nationwide – click here to find a screening near you!