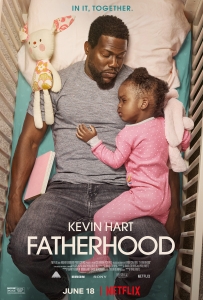 Any movie is immediately tempting fate when its very first line of dialogue is simply: “This sucks”. Luckily, though, Fatherhood comes nowhere close to sucking. In fact, it’s a rather sweet little drama about the trials and tribulations of single parenthood, which might not be in line to win any accolades in the near future, but is a completely serviceable movie with its own sense of genuine heart.

Kevin Hart (also a producer on the film) stars as Matt, who delivers that fate-tempting opening line at the funeral of his wife Liz (Deborah Ayorinde); she has suddenly passed away shortly after giving birth to their daughter Maddy, leaving Matt to raise her as a single parent. With occasional help from Liz’s mother Marian (Alfre Woodard) and his close friends Jordan (Lil Rel Howery) and Oscar (Anthony Carrigan), Matt slowly figures out how to best look after young Melody, from changing her nappies to soothing her when she won’t stop crying. Eventually, Maddy grows into a young girl (now played by Melody Hurd), which opens up a new wave of complications for Matt as he juggles his personal and professional life with his fatherly responsibilities, but always trying to raise his daughter exactly how his late wife would have done so.

There are movies like this which come out every few years or so, the kind of sweet-natured and feel-good drama about a parent bonding with their young child, and both of them facing all the challenges that come with such a rocky relationship; films like Gifted, or I Am Sam, or dozens other examples that I am blanking on as I write this, and now Fatherhood which fits all too neatly into this mould. There’s nothing wrong with getting this kind of film every now and then, especially when they’re executed well enough to feel genuine and heart-felt, as opposed to cynically trying to manipulate viewers for their easy tears. Parts of this movie you could certainly argue are perhaps trying a bit too hard to move its viewers to tears, but by that point there’s been enough likeability that’s been established with these characters and in the overall direction by Paul Weitz that stuff like teary monologues or recurring motifs like kissing the young daughter twice (“one from Mommy, one from me”), as corny as they may be, feel more or less earned.

As a vehicle for Kevin Hart to show a much softer side than most of us are used to seeing, the movie also gets by with his much more restrained and considerate lead performance. When he has to deliver a heart-breaking monologue or occasionally show some tears, he does it well, and with barely any of the usual Kevin Hart tics that some of his other few dramatic turns in the past have gotten away with (though once or twice, he’ll slip into a brief stand-up routine when describing things like the process of changing nappies). He also shares some really good chemistry with the other actors opposite him; he and young actress Melody Hurd work very well together, as he does with DeWanda Wise as a potential new love interest, and it goes to show how charismatic a performer he can be when he can even bounce a good zinger every now and then off of respected actors like Alfre Woodard and Paul Reiser (the latter as Hart’s boss). It’s unlikely that this is going to be a completely career-changing role for the comedic actor – as in, I don’t think he’ll be cast in the latest Noah Baumbach or Paul Thomas Anderson-directed heavy drama off the back of this film – but it does show that Kevin Hart does have some decent dramatic chops which shouldn’t be taken too lightly.

It is a very light film, one which certainly serves its purpose by being a good-hearted family drama and nothing more, though a lack of anything truly substantial outside of its overall decency and likeability might not help it stand out in the long-term. You watch it, you feel good as you watch it, and then you forget about it a day or two after you watch it; like clockwork, Fatherhood comes along to fill the void until the next similar movie comes along, and so on. It does stick closely to certain guidelines while neatly avoiding others – there’s no third-act custody battle or anything like that, thankfully – and delivers them in the exact kind of manner that you’d expect a movie like this to deliver. However, even if it’s just in the moment, the movie works well enough as wholesome entertainment to watch with close family members, and at just under two hours the movie doesn’t entirely overstay its welcome either, except for when it does come dangerously close to treading all-too familiar territory.

Don’t expect it to become a new family classic by any means, but as a harmless dramatic vehicle for someone like Kevin Hart, Fatherhood hits enough of the right notes to leave you in a good mood afterwards. It certainly doesn’t, as Hart says at the very opening, suck.

Fatherhood is a decent and wholesome family drama which sees Kevin Hart take on a much more dramatic role than he’s used to playing, and does it rather well, although its overall light touch as well as a tendency to stay in familiar territory might not help its longevity amongst audiences going forward.

Fatherhood is now available on Netflix.