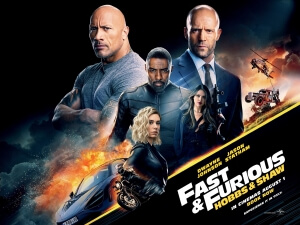 When they were first forced to work together in Fast & Furious 8, Dwayne Johnson’s Luke Hobbs and Jason Statham’s Deckard Shaw pretty much stole the show; their antagonistic back-and-forths were inspired, offering for some fun dick-measuring rivalry in a series that’s been nothing but dick-measuring, and the levels of charisma from both actors propelled their anti-chemistry up into the depths of space (where I hope to God this series eventually goes, Moonraker-style).

An entire movie centred around these two characters, arguably two of the most beloved of the entire Fast & Furious franchise, makes a whole lot of sense, as both Johnson and Statham are extremely capable action leads who can easily carry a big-budgeted action flick in their sleep, and since neither character is due to be featured in next year’s Fast & Furious 9 we might as well have a healthy helping of their antics since it’s probably going to be a while before we see them again. Luckily, for anyone who goes into any one of the Fast & Furious movies expecting to see plenty of over-the-top action and macho leads, the series’ first spin-off Hobbs & Shaw will give you everything you could hope for, and perhaps a little bit more to satisfy our lust for mindless blockbuster fun.

Set shortly after Fast & Furious 8, Johnson’s Hobbs and Statham’s Shaw have gone their separate ways, with the former living in Los Angeles with his young daughter Sam (Eliana Sua), and the latter shacking up in London where he regularly visits his incarcerated mother (a cameoing Helen Mirren). However, when Shaw’s sister Hattie (Vanessa Kirby), an MI6 agent on the hunt for a lethal virus, is attacked and pursued by an operative named Brixton (Idris Elba) – who’s been fitted with cybernetic enhancements that basically make him, in his own words, “black Superman” – Hobbs and Shaw are recruited to help find and contain the virus. The problem is, of course, they can’t stand each other; even with the fate of the world at stake, both of them still refuse to cooperate as partners, something which is made even trickier when they, along with Hattie, are forced on the run by Brixton and the mysterious company he works for. Will they obtain the virus and save the world (again)? More importantly, can these two guys actually get along for once?

The source for most of the film’s comedy, charm and fun is seeing both Johnson and Statham constantly try to one-up each other, mostly out of spite for their on-screen partner, and just like in Fast & Furious 8 their one-liners about how much they hate each other’s guts get more and more ridiculous, and therefore more enjoyable, as the movie goes along. Both of them have excellent comedic timing, as proven in other starring vehicles outside of this series, and together they function as a charisma-producing beast as they punch and smarm their way through all two-and-a-quarter hours of this movie. Also along for the ride and sharing in the two leads’ palpable chemistry is Vanessa Kirby, an increasingly impressive actress who proves herself as formidable in action sequences as her co-stars, and also Idris Elba who is having an absolute blast as the villain and has some fun scenes where he’s gleefully gloating about his enhanced superhuman abilities (and not to beat a dead horse, but if we can accept that cybernetic enhancement is a thing in the Fast & Furious universe, then surely it’s not too much to ask for one of the next movies to actually go into space?).

The action, too, is some of the most kinetic and stylish the series has yet offered, and when you have a director like David Leitch attached – who previously brought his A-game to John Wick, Atomic Blonde and Deadpool 2 – you can expect the choreography, stunt work and overall carnage to be extra impressive. Adopting everything from car chases in London, to explosions in Ukraine factories, to a climactic showdown set in Hobbs’ homeland in Samoa, Leitch lets the set-pieces grow more and more ridiculous but endlessly pleasing to watch, and as he proved with Deadpool 2 he has the ability to inject strong comedic timing into his action which helps make things a lot more enjoyable. However, he may have injected a little too much comedy into the proceedings, as there are more than one cases where the humour either feels a little too forced or goes on for way longer than it really needs to; there are a couple of high-profile cameos throughout that really could have been cut out because they more than outstay their welcome, since the whole movie just stops for five or so minutes just so these people can riff for no reason, and it feels very out of place for the scene they’re randomly popping up in. The movie also has a pacing problem, as a major action scene will be wrapping up and you think it’s the fitting climax for the film, but then it keeps on going for another half an hour, which isn’t necessarily bad but it leaves you a little punch-drunk because the previous sequence felt like it could have really been the end of this journey, but apparently not.

It’s dumb, sure, but going after a Fast & Furious film for being stupid is like criticising a Star Wars movie for being too unrealistic; none of that really matters as long as you’re having fun with the overall product, and Hobbs & Shaw is definitely more focused on delivering some solid, mindless entertainment than anything else, and like many of the more recent films in the overall series it delivers with a self-aware attitude and unpretentious acceptance of its own bonkers universe. But seriously, though, can you please set at least one of the next ones in space? That just feels like the most logical next step to take with these films.

Fast & Furious Presents: Hobbs & Shaw delivers some bonkers action and even more over-the-top thrills in a spin-off that relies heavily on the natural charisma of leads Dwayne Johnson and Jason Statham, and for the most part it gives us all the mindless entertainment we’ve come to expect from this series.