Fast & Furious 9 (Review) – When It’s This Much Fun, Who’s Complaining? 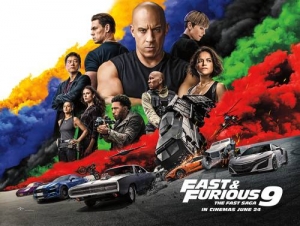 BASICALLY…: Dominic Toretto (Diesel) and his crew face off against a vengeful Cipher (Theron) and Toretto’s younger brother Jakob (Cena), who has his own score to settle…

Twenty years ago, Dominic Toretto and his street crew were simply robbing trucks filled with DVD players. Since then, they’ve committed bank heists, faced off against tanks, driven cars across skyscrapers, and even gone up against a submarine. Yes, it’s been a rather weird journey for the Fast & Furious franchise, but unlike some of the other over-the-top action movie series, it has truly embraced its stupidity and given the audience exactly what it wants, all while still remaining thoroughly entertaining.

With the arrival of the ninth entry (not including the 2019 spin-off Hobbs & Shaw), the franchise is back to doing what it does best: reaching its own limits and then exceeding them in gloriously dumb ways, while us mere viewers bask in its mindlessness. Honestly, though, after the year we’ve all had, we really needed a big, dumb blockbuster like Fast & Furious 9 to escape into, and this one fits the bill nicely until the next big summer movie comes along.

The film opens with Dominic Toretto (Vin Diesel) and his wife Letty (Michelle Rodriguez) living a quiet and peaceful life with Dominic’s young son Brian. Soon, though, they are called back into action when a powerful device that has the ability to take over technology falls into the hands of Jakob (John Cena), who so happens to be Dominic’s younger brother that the elder Toretto disowned after a family tragedy. Jakob, eager for revenge against his older brother, has partnered up with the crew’s old enemy Cipher (Charlize Theron, who spends most of the movie in a Hannibal Lecter-style glass cage) to activate the device and essentially control the world, and now Dom, Letty and their crew – Roman (Tyrese Gibson), Tej (Chris “Ludacris” Bridges) and Ramsey (Nathalie Emmanuel) – must of course stop them before it’s too late.

Oh, and in the middle of everything, fan-favourite character Han (Sung Kang) – previously thought to have been killed – is very much alive, and back in the fold to help his old buddies out. The explanation as to how he survived might be a little underwhelming – especially seeing how this series has previously resurrected dead characters via amnesia sub-plots – but it is nice to see this character back after his less-than-gracious exit some movies prior.

Han’s sudden return really does lead into how this whole series is just one great big soap opera, albeit one with flashier cars and a few more explosions than your average EastEnders episode. However, it’s a soap that you just can’t help but enjoy when you’re in the right mood, even with all of the ridiculous plots piling on top of one another, the melodramatic twists and turns, and on-the-nose dialogue that’s performed with an equal amount of cheesiness. Fast & Furious 9 certainly continues the series’ soapy nature, and with regular director Justin Lin also returning after sitting out the last couple of entries, it feels like a return to basics while also acknowledging that, in the time since Lin left the franchise, things have become much faster and furious-er than ever.

Case in point, the action in this film reaches new pinnacles of silliness, even more so than the skyscraper and submarine antics of the last two Fast & Furious movies combined; so much so, in fact, that a running gag sees Tyrese Gibson’s Roman actually begin to question how he and his crewmates keep surviving so many dangerous stunts without a scratch. How could he not, when here they drive over landmines, swing their cars across cliffs like Tarzan, attach powerful electromagnets to their car, and – in a reveal that will please everyone that has wanted to see this in one of these movies – actually jet a car into space. It’s all so pleasingly dumb, and that’s exactly what you’re wanting out of a Fast & Furious movie; nobody cares about the plot, or whether certain things make sense or even obey the laws of physics, so long as the action is entertaining and always ups the ante with each passing sequence, which Fast & Furious 9 manages to do in spades thanks to Lin’s firmly characteristic direction.

There is also a noticeable effort on this movie’s part to step up its game when it comes to some of the series’ lesser qualities, particularly the treatment of some of its female characters. Whereas before the series relied heavily on shots of scarcely-dressed women draped over shiny cars, the female characters in this movie actually have more agency and are fleshed out more than they’ve previously been able to; Jordana Brewster’s Mia also returns in this film, but she is utilised a lot more here than in a lot of the other Fast & Furious movies, and actually gets to cause a fair amount of damage, whereas previously she was just there to be a romantic interest, or carry someone else’s child, or a mostly useless pawn for the villains to kidnap later on. Some of it does seem like a calculated response to the #MeToo climate, but honestly it’s just cool seeing a genuinely stronger female presence in a major male-orientated action blockbuster, which is a change that definitely needed to happen to this series regardless of the movement.

By now, you probably have already decided if you’re going to see this movie or not, as you will have done before seeing reviews for any of the other movies in this series, so really it doesn’t matter what critics like myself end up saying about it. Personally, I did enjoy the film, as it hit me in that sweet spot of big, dumb action blockbuster mayhem that I’ve been craving to return to for more than a year, but at this point, if you’re not already into this series, then I highly doubt that Fast & Furious 9 will be the one to change your mind. However, if you’re seeking a return to big-screen silliness and pure escapism, then you can’t do any worse than this stupidly fun tentpole movie.

Fast & Furious 9 is yet another enjoyably ridiculous entry into the ongoing action franchise, complete with the over-the-top action and soapy storylines you’ve come to expect, along with a little more female agency that’s rather welcome, but when it’s all so fun, who’s complaining?

Fast & Furious 9 is now showing in cinemas nationwide – click here to find a screening near you!