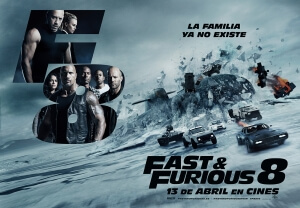 BASICALLY…: Dominic Toretto (Diesel) goes rogue and partners with cybercriminal Cipher (Theron), forcing his team to go up against their former leader…

Much like pornography, you don’t go into a Fast & Furious movie for the plot, but you instead just want to see all sorts of bonkers stuff happening on-screen, and now that it’s up to eight movies the franchise has settled comfortably into being the kind of dumb-but-fun blockbuster that delivers on high-octane entertainment, without a whole lot of thought being put into much else.

The same can very much be said for the newest instalment – titled The Fate of the Furious in the States, but boringly titled Fast & Furious 8 over here – which gives us exactly what we want to see in this franchise without compromising any of what made it so enjoyable in the first place.

This one kicks off with series lead Dominic Toretto (Vin Diesel) and his wife Letty (Michelle Rodriguez) on their honeymoon in Havana, Cuba, taking part in an obligatory street race that’s about as wild and silly as you’d expect – but things take a turn when Dom is blackmailed by cyberterrorist Cipher (Charlize Theron), who has something or someone of value to him in her grasp, into betraying his team and working for her. Sure enough, he turns on the very crew he’s spent the last few films establishing as “family”, now leaving them no choice but to try and subdue their former leader, and stopping Cipher in her dastardly plans for world domination, which involves travelling all over the world from New York to Russia.

The gang’s (mostly) all here, from Dwayne Johnson’s hulking enemy-turned-ally Luke Hobbs, to Tyrese Gibson and Chris “Ludacris” Bridges’ comic relief/gadget wizard characters, to even Jason Statham as the previous film’s baddie Deckard Shaw, who is now brought onto the team to assist them in taking down Dom and Cipher. Of course, the late Paul Walker is happily retired off-screen, and aside from a few fleeting references to him he plays no part in this plot whatsoever, as it honestly should be (just leave his character where he left off, which was honestly a perfect way to say goodbye to him). The ones that are in this, however, are as much fun as they usually are, particularly Johnson and Statham who have some truly outstanding back-and-forths with each other, boasting about how they’re going to beat each other to a pulp when this is all over with. However, for a lot of this film they are separated from Diesel who over the past few films really was the glue keeping them all together, so there is less of a sense of comradery this time round when the team is shown working together, which for an ensemble of colourful characters such as this can threaten to undo it at any time.

The plot doesn’t make a lick of sense when you boil it down, with enough holes to drive God knows however many cars through, but let’s face it: that’s not the reason why you go out and see these movies at all, is it? No, you’re going along to see impressive car stunts, things blowing up, action heroes showing off their impossibly-muscular bodies, and all at a fairly smooth pace to ensure it never gets boring. Luckily, Fast & Furious 8 gives us exactly all of that, and then some; it boasts some of the biggest action set-pieces of the series to date, including a large-scale car chase through the streets of New York complete with “zombie cars” (don’t question it, just accept it), and a climactic chase across the tundra-ridden landscapes of Russia, involving giant submarines and heat-seeking missiles. All of those ingredients are essential to making one hell of an action fun-ride, and franchise newcomer F. Gary Gray directs with as much free reign as possible to make set-piece after set-piece feel as though you’re gleefully being whisked along for the ride, instead of feeling like you’re sitting in a quiet auditorium watching things blow up on a screen for over two hours. If it’s action you want and are expecting, then it’s action that you will certainly get when you pay to see this film, and luckily it’s fun and entertaining enough to keep you hooked until its closing moments.

As for where it ranks among the other films, particularly the later ones, it’s honestly nowhere near the top (it will take a lot to dethrone the 5th and 7th ones) and more along the lines of the standard 6th one. Though the action is certainly fun, it takes its sweet time to get to the good stuff, and for a lot of it there are scenes that do tend to go too far into overdramatic territory, even for an over-the-top film such as this. Theron is an effective baddie, but she’s not given a whole lot to do other than stand in front of a computer screen and react to things, although where it leaves things it seems we haven’t seen the last of her in this franchise (same with Helen Mirren, who also shows up in a cameo role as Statham’s mother, and I’m not a praying man but I pray to God this isn’t the only film in this series where she appears). In addition, it doesn’t have as much heart to it as the 7th film did, and again the sense of comradery is diminished slightly since their beloved leader is away from them for most of the running time.

But despite all that, it’s a Fast & Furious movie that delivers everything you could expect from this franchise, in a satisfying enough way to fill your cravings until the next big outing in the series. Now, if only there was a way we could get them into space…

Fast & Furious 8 delivers everything you could expect from the franchise by this point, from the high-octane action to the delightfully nonsensical plot, and though it’s not as strong as previous entries it’s still satisfying enough to leave you highly energized and pumped up from seeing such bonkers car-based stunts on the big screen.