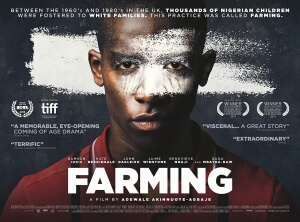 BASICALLY…: Enitan (Idris), a young Nigerian teenager sent to live with a white British family, becomes the leader of a local skinhead gang…

Adewale Akinnuoye-Agbaje may be best known for roles in shows like Lost and Oz, as well as some small film roles in Congo, Thor: The Dark World and Suicide Squad, but after his semi-autobiographical directorial debut Farming, he’s about to be known as something else entirely: a survivor.

Along with several other Nigerian-born infants in the 1960s, Akinnuoye-Agbaje was “farmed” to white British foster parents in the hopes that he would lead an advantaged life, except in his case he got involved with some seriously twisted ideologies, all of which are documented – albeit fictionalised slightly for dramatic purposes – in his intense, unnerving and very disturbing film Farming, which can sometimes be exceptionally difficult to watch, but is also a strong debut from a fierce and unfiltered storyteller.

The film takes several cues from the director’s own life, with main protagonist Enitan (a steadfast Damson Idris) being taken in as a child by white foster parents Ingrid (Kate Beckinsale) and Jack (Lee Ross). At first, young Enitan is sweet and reserved, but as the adults in his life start to take advantage of his sweetness, he is slowly transformed into an angry, self-hating teenager filled with contempt for his black skin and culture. Eventually, he is initiated into a local gang of skinheads, whose vile racism and anti-social ideologies seem perfect as an outlet for Enitan’s own prejudices against his own race, and as he continues down this dark path it becomes more and more apparent that the sweet young boy he once was has been replaced by someone much more hateful and fierce.

If you have ever been the victim of intense harassment based on your skin colour, gender, disability etc, or even if you’ve never had the misfortune of experiencing any of those things, then be warned: this movie will trigger you. Akinnuoye-Agbaje does not hold back on the intensity of the situation, which is depicted with such ferocity that you feel every assault, every racial slur, and every vile thing that this skinhead gang does throughout the course of the movie, from physical assault to sometimes things that are even worse. He also does not easily forgive the main character for his actions; it’s easy to sympathise with him in the sense that he clearly has no idea how to belong in this world, but that does not give him a pass for all the hateful things he’s shown doing throughout, whether it’s harassing people of his own race in the street, getting into fights, or in one disturbing scene coerce his mixed-race teacher (Gugu Mbatha-Raw) into being assaulted by his new white supremacist comrades. Some will no doubt call out this film for its overly aggressive tone and general nastiness when it comes to its main character’s actions, but the important thing to remember is that this is largely based on a true story, and is predominantly how the writer and director remembers his own experiences, which for all we know were just as uncomfortable as they are depicted on-screen. In that sense, it’s a powerful recollection.

While sitting through the movie is certainly a forceful experience, there are things about it that don’t entirely work. The tone is consistently grim throughout, but there are some sequences early on that come out of nowhere to disrupt the mood and leave you just as discombobulated as the main character. For instance, young Enitan is suddenly whisked away by his birth parents – including his father, played by Akinnuoye-Agbaje himself – to his ancestral home of Nigeria, where the film all of a sudden appears to turn into Cannibal Holocaust; it is shot, edited and even acted like a horror film, the intent of which is understandable as it’s meant to show how this particular experience to the young protagonist is overwhelming and more than a little frightening, but when you try and piece it together with the rest of the film, which adopts a very gritty, bleak and unforgiving manner, it feels somewhat out of place. You also never fully buy that this character, as racist as he himself is shown to be, would suddenly be so submissive to this gang who in a previous scene had stripped him naked and spray-painted him white; it’s like that scene in Revenge of the Sith where Anakin just suddenly pledges loyalty to the Emperor, it happens so fast that the logic simply doesn’t add up.

Regardless of its faults, and there are more than a few (some of which I don’t even have room to go into in this review), sitting through this film is a challenging experience, as you are witnessing hate crimes being committed in such an unforgiving and passionately violent manner that it would be enough to make anyone’s skin crawl, no matter what the colour. As someone who once experienced a form of bullying similar to the kind shown in this film, it certainly left me feeling very nervous because it felt so close to the real thing, which seems to be Akinnuoye-Agbaje’s greatest achievement with his flawed but effective passion project; he allows his audience to feel the harm he went through or even caused as a young man, and he doesn’t sugar-coat any of it for the sake of a more mainstream audience. He has made a movie filled to the brim with dark, unpleasant truths, and it is in his favour that they are executed so effectively as they have been.

Farming is not an easy watch, especially for anyone who has ever been violently harassed for being different, as director Adewale Akinnuoye-Agbaje doesn’t shy away from the nasty hate-fuelled violence of its lead character, but you have to admire how effectively it is executed by someone who lived through (almost) everything the protagonist experiences here, making it a flawed by undoubtedly moving passion project to sit through.

Want to decide what the movie’s like for yourself?
Check out Farming showtimes in London
via