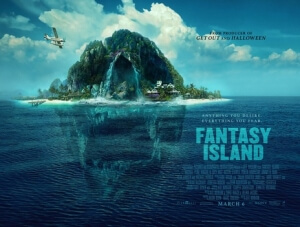 BASICALLY…: A group of guests on a mysterious island where people’s fantasies can come true soon discover that nothing is as it seems…

The idea of turning the concept of a show like Fantasy Island – the Ricardo Montalbán-fronted TV drama where guests on a luxury island find their fantasies all coming true – into a more sinister horror is not a bad idea; it’s easy to, for lack of a better phrase, fantasise about the possibilities of a particular fantasy slowly turning into a nightmare, perhaps with some sort of Twilight Zone-esque approach that really explores how horrifying it can be to live in a fantasy world.

Too bad that’s not what this film is – instead, this is a pretty dumb waste of an opportunity that has absolutely no idea what direction to take itself in, nor does it ever feel like something any sane person would ever wish into existence.

As in the show, the plot surrounds a group of people who are transported to a remote luxury island, run by the enigmatic Mr. Roarke (Michael Peña, in the Ricardo Montalbán role), who tells each and every one of them that their fantasies will mysteriously become a reality. For instance, Gwen (Maggie Q) finds that she is suddenly married and has a child; Patrick (Austin Stowell) wishes to enlist and finds himself in the middle of a war zone; brothers Brax and J.D. (Jimmy O. Yang and Ryan Hansen) suddenly become wealthy party animals; and Melanie (Lucy Hale) wants to exact revenge on childhood bully Sloane (Portia Doubleday). It soon transpires, of course, that each of these fantasies don’t turn out to be as rewarding as they seem, and they soon find themselves in a deadly race to escape the island and its mysterious ways.

As someone who never really watched the show that this movie is based on (although as a kid, I did watch the Looney Tunes parody Daffy Duck’s Fantastic Island, if that counts), I can only imagine that it contains far more compelling, more ambitious and way more provocative material than this horror film offers. Director Jeff Wadlow, whose previous film was another bad Blumhouse outing Truth or Dare, has compiled a film that contains few shocks and even fewer teeth, not just because the film is woefully not scary in the slightest, but half the time it doesn’t even seem to know it’s actually meant to be a horror movie. The tone is so sporadic that it feels like it wants to be several other genres at the same time, from an action movie to a comedy to an intimate drama, and can’t settle for just one of those. It results in a messy experience, as though it’s comprised of several other pitches for a Fantasy Island movie across several of those other genres, when the horror one was interesting enough (although it still wouldn’t have amounted to much, because not even the horror aspect of this movie is done that well).

While Wadlow constantly struggles to find a suitable tone for this movie, he also doesn’t give many of the actors enough solid direction to at least keep things intriguing. While some actors emerge with their dignity intact, like Maggie Q and Austin Stowell who honestly aren’t that bad here, others aren’t so lucky. Take Lucy Hale for instance, who aside from apparently being the result of DNA splicing between Mila Kunis and an American Girl doll, awkwardly delivers her lines with precise enunciation that can be distracting, along with a largely blank expression across her face that barely changes throughout. Jimmy O. Yang and Ryan Hansen are an extremely obnoxious pair that really don’t fit in this version of Fantasy Island, no matter what genre it tries to settle for; and as for Michael Peña, he can’t help but feel miscast in the role that the extremely charismatic Ricardo Montalbán made famous, despite the actor’s admirable restraint from not going too over-the-top. Again, though, it feels like Wadlow’s directionless oversight on this film caused such sporadic performances all across the board, because like their director they could not figure out what kind of film they were acting in either.

But no matter what kind of film that Fantasy Island eventually settles on being, it would still be one that has a script that makes absolutely no sense from the start. It’s never really explained how certain things function, nor does there seem to be a real reason as to why this island, despite apparently being public knowledge by this point, would still be independently operated when its resources could be used to help people more in need across the world. On top of that, certain character motivations and later plot twists really don’t add up, particularly one near the end that comes literally out of nowhere to completely throw you off, forcing you to look back on everything you saw before and still realise that none of it makes any sense whatsoever. This is the kind of script that has no intelligent thought behind it, and blatantly feels like it was made just to keep the Fantasy Island brand name alive, after years of dormant activity following a failed TV revamp starring Malcolm McDowell (who honestly would be a better casting coup than Michael Peña in this film, because at least McDowell can match Ricardo Montalbán’s on-screen charm).

Unfortunately, because this movie is pretty dumb and not that entertaining, it’s doubtful that people will be interested in anything that carries the Fantasy Island name for quite some time, especially when the Looney Tunes parody of it is ironically less of a cartoon.

Fantasy Island is a dumb, unsatisfying and tonally inconsistent reboot of the TV series, which squanders any of its potential with a failure to settle for just one genre, performances that are about as lost as the direction, and a script which continuously makes very little sense.

Want to decide what the movie’s like for yourself?
Check out Fantasy Island showtimes in London
via