It’s been rather quiet on the casting front as of late, but 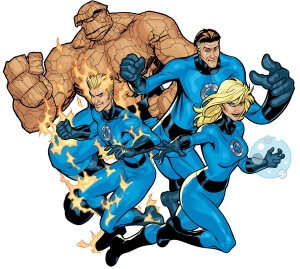 this morning brings us some exciting news concerning the new lead quartet of the upcoming Fantastic Four reboot!

According to The Wrap (an article which will likely be confirmed by 20th Century Fox very soon), the roles of Reed Richards/Mr. Fantastic, Sue Storm/The Invisible Woman, Johnny Storm/The Human Torch and Ben Grimes/The Thing will be filled by Miles Teller (That Awkward Moment), Kate Mara (House of Cards), Michael B. Jordan (Fruitvale Station) and Jamie Bell (Billy Elliott), respectively.

However, while Mara and Jordan seem to be safe locks – as had been rumoured for a while – Bell is still in heavy negotiations for his role while Teller is facing a possible schedule clash with production on Divergent sequel Insurgent, which is due to start shooting around the same time as The Fantastic Four. Should the young-adult adaptation take priority, the role of Reed Richards/Mr. Fantastic would have to be recast.

Even so, this is perhaps the closest we’ve come to a full confirmation of who will be replacing original cast Ioan Gruffudd, Jessica Alba, Chris Evans and Michael Chiklis – stars of the ill-received original films in 2005 and 2007 – in this new reboot, to be directed by Chronicle‘s Josh Trank.

The Fantastic Four will begin shooting next month, with a release date of June 2015 eyed afterwards.