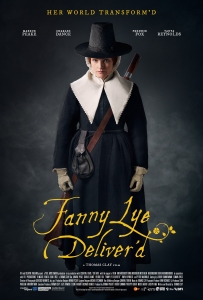 You wouldn’t think that a small-scale film like Fanny Lye Deliver’d would have a production troubled enough to rival Michael Cimino’s Heaven’s Gate, but nowadays it seems anything is possible. Originally commissioned nearly ten years ago, filmmaker Thomas Clay’s passion project saw the untimely death of producer Joseph Lang and numerous problems with securing financing – and that was before it even went into production. When filming finally began in early 2016, the extreme weather within the English countryside put a lot of strain onto the crew as it constantly flooded the set, and then the film spent a good three years in post-production where Clay once again ran into financial woes as the budget worked its way up to around £2.5 million, and also toyed around with the musical score (provided by himself) before finally premiering it at last year’s BFI London Film Festival.

For all those difficulties, the fact that the movie came out as strong and entertaining as it did is a divine miracle in and of itself.

Set in the Shropshire countryside in 1657, when Oliver Cromwell and his Puritanical ways of life ruled over the whole of England, the Lye family lives a quiet existence on a small farm. The Lyes are made up of the old, cruel patriarch John (Charles Dance), his quiet and obedient wife Fanny (Maxine Peake), and their young son Arthur (Zak Adams); the latter two are frequently subject to John’s stern and wicked discipline in the name of the scripture they closely follow. One day, the family finds a young couple, Thomas (Freddie Fox) and Rebecca (Tanya Reynolds), hiding in their barn after evading capture from a local sheriff (Peter McDonald), and it isn’t long before they reveal their own ideas of how to live life – which to Fanny provides an unexpected gateway towards her own liberation from her less than ideal Puritan existence.

It is a thoughtful, provocative and endlessly entertaining tale of empowerment, all told in a classy, old-fashioned style of filmmaking normally reserved for the Westerns of old. You can notice a lot of visual cues from genre filmmakers like Sergio Leone and Clint Eastwood, similar to how Quentin Tarantino pays homage in his films, but Clay gives the aesthetic its own voice with a dreary, almost dream-like farm landscape that’s almost always coated in fog and surrounded by greenery as far as the eye can see. The filmmaker incorporates a lot of intriguing close-ups and nerve-inducing tracking shots that play up the claustrophobia of this one location where we spend almost the entire movie, all with an Ennio Morricone-esque score that keeps building onto itself as it reaches some rather shocking crescendos. It’s clear that Clay is having a lot of fun playing around with the historical connotations of this particular time period, especially when the Puritan family is subjected to the radical and increasingly liberal ideologies of their new guests, including one such titillating scene which gets surprisingly graphic as it goes along.

He also has the decency to give us characters worth getting to know over the course of all this madness; although Fanny Lye is the title character, this feels very much like an ensemble piece, where just about each one of the main players gets a moment to shine in the sun. Maxine Peake is, as always, utterly compelling as someone whose way of life is corrupted, for better or worse, by the heresy she so craves in her life, while Charles Dance does his usual “sinister old man” routine faultlessly, even getting something of an arc as the film progresses. Freddie Fox and Tanya Reynolds are both having a blast here, playing up their easy charisma to a point where you can understand why the Puritan family – and Fanny especially – would be taken by their alluring ways of life, and even in scenes where they could so easily be written to be straight-up villains they still find ways to be extremely likeable despite doing some very questionable things later on. The acting from just about everyone is on point here, and the characters are easy enough to identify and understand that you do want things to eventually work out for most of them.

The movie is consistently entertaining and made even more watchable by the passion both behind and in front of the camera, although there are parts where you can feel the slight limitations brought upon by the film’s on-set complications. A late third-act reveal appears to come right out of left-field, complete with a couple of major character developments which seem rather rushed, all feeling like it’s something that was added just to give this movie a reasonably exciting climax, when things were in fact moving forward more naturally before. The climax does offer some satisfying pay-offs, but the journey to get there feels a lot bumpier than anything else around it, which doesn’t hurt the movie overall but leaves it just slightly off-balance with everything else that was working a lot better.

Again, considering the hell this movie went through just to get made exactly how the director envisioned it, the fact that Fanny Lye Deliver’d is even half as absorbing as it is makes this a worthwhile viewing experience. For lack of a better phrase, it delivers.

Fanny Lye Deliver’d is a compelling and consistently entertaining alt-Western with its own voice amidst the numerous genre homages, filled with great performances and interesting characters that make it worth the troubled production history this movie went through.

Want to decide what the movie’s like for yourself?
Check out Fanny Lye Deliver’d
via