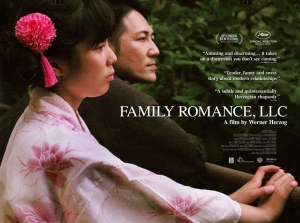 BASICALLY…: A Japanese man (Ishii) runs a business where he impersonates family members for a living…

Werner Herzog is someone who, no matter what you may have heard about him, deserves a ton of respect for his craft. It’s easy to associate the German figure with his eccentric and sometimes crazy behaviour, most famously his feud with actor Klaus Kinski which at one point saw the director pull a gun on the actor when he threatened to walk off the set of Aguirre, the Wrath of God, but to do that would be to trivialise the fact that Herzog is quite the accomplished filmmaker, having made his fair share of documentaries and narrative features over the years – he’s even ventured into acting territory on occasion, appearing in things like The Mandalorian and Jack Reacher – and still going strong even as he approaches 80 years of age.

The fact that it has such a seasoned auteur behind the making of it is part of what makes Family Romance, LLC such a fascinating sit; this is a film that feels so authentic, so grounded and above all else simply captivating to watch, that it leaves you in a state of awe which no other filmmaker could probably reproduce.

The first scene in this Japan-set odyssey suggests a straightforward narrative; a man named Yuichi Ishii (playing himself) meets with his 12-year-old daughter Mahio Tanimoto (also herself) for the first time in ten years. Their meet-up is both innocent and cathartic; in between taking selfies together under the cherry blossom and watching amateur samurais practise in the park, they share sweet, meaningful conversations about why he left in the first place, and how he now wishes to be in his daughter’s life once more. It’s a tender father-daughter reunion… except it isn’t. As we learn, Ishii is merely an imposter, hired by Mahiro’s mother through his company called Family Romance, which specialises in supplying people to fill the shoes of absent friends, family members and any other profession. Basically, whatever you need a person for – whether it’s acting as a father to a bride, fake paparazzi to make one feel like a celebrity, to recreate a joyous moment, or even to take the blame for a screw-up at work – Family Romance will supply them.

The movie mostly just follows Ishii as he supplies customers with whatever it is they want out of people, so in terms of actual plot it’s very barebones; you’re largely just experiencing these very natural conversations between Ishii and his clients, and even seeing how they play out once all of the necessary information is gathered. It is very documentary-esque, with Herzog shooting the film guerrilla-style which gives it an amateur feel that also seems extremely spur-of-the-moment, although the film itself is scripted with the people involved playing fictionalised versions of themselves. It’s fascinating how Herzog has captured this movie, because it feels like a movie of two worlds; both an intriguing documentary about this real-life business run by this actual guy we’re following around, but also a sweet human drama about connections and how far some people are willing to go in order to make people feel happy, and each one of them works despite themselves. You’re endlessly interested in how this business model works and what kind of services they offer people, and as you go along you also really grow to admire Ishii and his clear passion for his business, even though it does involve misleading people to a certain extent.

Herzog captures the raw beauty and glowing eccentricities of Japan though some gorgeous and intricate cinematography, which for anyone eager to visit the country in the future (providing COVID-19 is no longer a threat, of course) should be a powerful visual aid to help convince them even more of going there. From the parks of pink cherry blossoms to the smog-blanketed city landscapes, caught by a mixture of handheld camerawork and high-flying drone visuals, this is a beautiful-looking movie that feels grand even on the micro-budget it was clearly working with (aside from the intentionally amateurish camerawork, which at one point doesn’t even try to disguise itself in shots where you can see the camera being reflected in a mirror, the cast is entirely made up of unknown local actors). The experimental aesthetic doesn’t automatically make it accessible to mainstream audiences, especially with its lack of concrete plot and a rather abrupt conclusion, but then again Werner Herzog has never been one to bow down to the whims of the average cinema audience; most of his films are famous for eschewing traditional production values like actors’ trailers and the like, keeping the focus entirely on shooting the content – in this case, he apparently shot over 300 minutes’ worth of footage during production – and just doing its best to put out the best, if not the most fascinating, film possible.

Herzog has definitely made something remarkable here, and again while it will certainly not appeal to everyone it does leave you in a sense of awe with the way it’s shot, structured and edited, because it makes things feel far more real than most other mainstream movies do, without once sacrificing the filmmaker’s overall intent. I’d say it’s worth a try if you’re after something a little different than normal, and especially if you’re planning a future trip to Japan, for this strange but fascinating little movie provides solid material for both of those things.

Family Romance, LLC is a fascinating little film by auteur Werner Herzog, which adopts a documentary-esque filmmaking approach to a film that is otherwise scripted, but both elements work well because the subject matter and its lead figure is interesting enough to hold your attention – not to mention the fact that it shoots Japan in such a beautiful manner – and the emotional weight feels real enough to keep you invested right up until the final shot. Its experimental nature won’t be for everyone, but it is intriguing enough for anyone to at least make the effort in watching.

Want to decide what the movie’s like for yourself?
Check out Family Romance, LLC
via