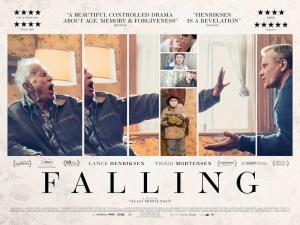 BASICALLY…: Family man John (Mortensen) deals with his stubborn elderly father (Henriksen), who is beginning to display signs of dementia…

It’s never a good sign of anyone’s parenting abilities when one of the first things you say to your infant child is, “I’m sorry I brought you into this world so you could die.” As we see throughout the rest of Falling, the directorial debut of Viggo Mortensen, it doesn’t get much better with the cantankerous and mean-spirited Willis – played by Lance Henriksen and Sverrir Gudnason in the present and past respectively – using every available opportunity to verbally, emotionally and sometimes physically abuse pretty much everyone and everything around him.

He’s quite the handful, in ways you’ll eventually discover, but Mortensen remarkably shows great restraint in making him an all-out villain. According to Mortensen’s script, based very loosely on his own parental relationships, there is a much more intriguing and vulnerable person underneath the hostility, and part of what makes the movie interesting is how the writer and director really gets inside this character’s fragile mind and picks at his many flaws to understand him better as a person. It might not be a person we like, but it is a person nonetheless, and while the movie certainly has its own share of faults you cannot deny its strong intentions when it comes to this particular character piece.

The film has a disjointed narrative, frequently cutting back and forth from present day to flashbacks where we see Willis’ fiery temper at various stages in his life. In the present day – presumed to be not long after the 2008 presidential election, since there is an Obama campaign poster on a character’s fridge – the elderly Willis (Henriksen) is brought from his remote Illinois farm, where he’s lived for most of his life, to California to briefly stay with his eldest son John (Mortensen) so they can find a new home for him. Willis, who is beginning to show blatant signs of dementia, isn’t so happy with the idea despite him apparently agreeing to it beforehand, and as a defence mechanism frequently spouts homophobic and racist insults towards John and his part-Chinese husband Eric (Terry Chen) in an attempt to get a rise out of his calm and collected son. Meanwhile, in the flashbacks, we see a younger Willis (Gudnason) instil his fiery control over his children and his wife, which eventually drives her away and dampens his relationship with his children who have to deal with his volatile nature for decades to come.

Mortensen gives you every reason under the sun to hate Willis; he’s a bigot, a misogynist, stubborn as a mule, and is prone to angry outbursts whenever things do not go his way, which includes but is not limited to throwing things at people and calling them derogatory terms. Yet, through a combination of Mortensen’s tender writing, and two equally great performances by Lance Henriksen and Mortensen himself (Henriksen, naturally, is the film’s standout), you can also understand the appeal behind John’s unconditional love for someone as volatile as Willis. You see in the flashbacks how John idolises his father from an early age, as the two bond over duck hunting and other masculine activities, which serve as fond enough memories for him to tolerate his father’s increasingly unfiltered personality even when he’s at his most vicious, and through Mortensen’s gentle performance you can feel John straining to pull himself together as Willis keeps baiting him with one hateful insult after another. Meanwhile, Henriksen is having a blast acting erratically and uncontrollably, in one of the character actor’s finest turns in his long and advantageous career, making you feel every venomous bite he makes while also hinting at a much more vulnerable side that he’s doing whatever he can to hide away. Seeing the two of them on-screen is an intense experience in and of itself, because you never know who’s going to light the fuse first, and when the ball finally drops it’s incredibly satisfying to see the two of them butt heads after a lifetime of unease.

As strong-willed as the performances and the character work are, though, the movie is not very easy to get through. It goes at a sluggish pace, so much so that scenes just keep going when they should have ended a few minutes prior, and as time-spanning as the timelines are there isn’t much that happens in them either. It says something when one of the more unique scenes in the movie is when Willis is having a prostate exam – by a cameoing David Cronenberg, of all people – because everything else is either repetitive or inconsequential to a point where you start to feel a little bored. As a director, Mortensen has a fine enough visual eye, but he perhaps needs to learn a bit more how to pace a scene so that it doesn’t go on for longer than necessary, because his current method can cause some less-attentive viewers to begin focusing on other things to pass the time. He certainly has ideas about what he wants to say and do in his script, but if he took some time to fine-tune the way he executes them he could be on the path to becoming a Clint Eastwood-esque filmmaker who can harness the core human condition through drama.

For now, or at least until Mortensen can work a bit more on his craft, Falling is far from perfect, but it’s held together by some tender ideas and some showy performances which give way to its overall good intentions.

Falling sees Viggo Mortensen direct, write and co-star in a tender family drama that’s boosted by some intriguing ideas and themes, as well as two great performances by Mortensen and a career-best Lance Henriksen, but a sluggish pace and repetitive scenes hint at a directorial vision not yet fully perfected, but over time could be nurtured into something truly special.

Falling is out in cinemas on Friday 4th December 2020.