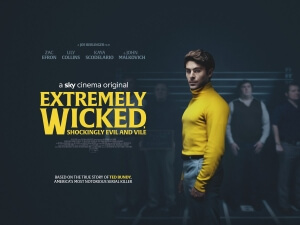 BASICALLY…: When her boyfriend Ted Bundy (Efron) is placed on trial for the murder of several women, Liz Kendall (Collins) struggles to accept her reality…

Ted Bundy is up there with Jeffrey Dahmer, John Wayne Gacy, Ed Gein and Aileen Wuornos as one of America’s most notorious serial killers, having brutally raped and murdered several women in his lifetime, but to his miniscule credit he had what most of those others murderers never had: charm to spare. If you watch archival footage of Bundy, you can clearly see that this was a man who knew how to win people over with not just his good looks but also his charismatic personality, all of which can easily make one forget that he was a monster that deserved every last electrical bolt during his eventual execution in 1989.

With that in mind, casting someone like Zac Efron as Ted Bundy is a stroke of genius; the actor has proven himself to be quite versatile in several roles across dramas, comedies and Disney Channel musicals, all with a puppy-dog exterior that’s hard to resist, and he too has a distinct charm in his on-screen presence that makes him very easy to like, even in films that aren’t all that good. It’s a casting choice that pays off, as Extremely Wicked, Shockingly Evil and Vile lives and breathes through Efron’s show-stopping performance, and is an entertaining look at the life of a very dark soul who did some truly horrific things that nobody should have to experience.

The crux of the film focuses on Bundy’s relationship with Liz Kendall (Lily Collins), a single young mother who catches his eye one night, and who allows this handsome young stranger to become a father figure to her young daughter. Of course, things don’t remain rosy for long, as Bundy is soon held by the authorities under suspicion of the brutal murders of several women across numerous states; naturally, he passionately proclaims his innocence, and Liz is convinced that her lover did nothing wrong, despite the growing amount of evidence that he did, in fact, kill a lot of people. Bundy soon gains notoriety through his trial, which becomes the first such case to be televised in history, gaining supporters and even lovesick fangirls as he begins to act as his own defence counsel; meanwhile, Liz is left to feel an overwhelming amount of guilt and denial over her role in his life, which makes her struggle to finally move on with her life.

Interestingly enough, this is not the only Ted Bundy project to be directed by Joe Berlinger this year; the filmmaker put out the Netflix documentary series Conversations with a Killer: The Ted Bundy Tapes in January, which achieved strong enough word of mouth that the streaming service also allowed him to release his more fictionalised version of Bundy’s life in the US, with a limited theatrical release over here as well as exclusive distribution on Sky Cinema. You can tell this movie was made by someone who was not only primarily a documentary filmmaker (his only other narrative feature was Book of Shadows: Blair Witch 2, but the less said about that one the better) but had clearly done a lot of research into this particular subject, because Extremely Wicked, Shockingly Evil and Vile is so full of fascinating tidbits about Bundy’s life that it sometimes can be hard to contain. While it does lack a more thorough examination of Bundy’s real-life crimes, it skims the surface just enough to hold your interest as a movie, because its focus here is on making the audience feel like they themselves are being seduced and charmed by this person’s affluent charisma, much like how Liz and several other characters are throughout this film. It’s a unique perspective that some will understandably call out for sensationalising a serial killer, but I felt was an interesting way to go about it; it places us in the position of Lily Collins’ character who only sees Bundy as this seemingly nice and handsome guy who couldn’t possibly do any of the things he’s been accused of doing, which makes sense when you know this movie is based on the Bundy-centric book that the real Kendall wrote some years later, and sets itself apart from some of the other Bundy movies of the past.

The film focuses more on how Bundy’s natural charm and good looks made it easy for him to seduce and later murder his victims, but perhaps even more sinisterly won the affections of an adoring nationwide audience. Efron is stunningly good at portraying the sheer arrogance of this attention-hungry beast in scenes where he’s making even his own trial a spectacle worthy of the television cameras, and it’s all right there in his steely eyes that hide a truly soulless being with zero remorse for his crimes and only a vain plea for notoriety in its place. On the flipside, you have Lily Collins who’s also holding her own in a very emotional role that she beautifully handles without going too over the top (by the way, between this movie and Tolkien, this is the far more interesting movie co-starring Lily Collins as the female lead to come out this week), as well as memorable supporting turns by John Malkovich as the judge presiding over Bundy’s trial and Haley Joel Osment as the kindly friend of Collins who more or less becomes the very man she believed Bundy to be before everything happened.

Like I said, this isn’t a movie that gets into the proper facts about Ted Bundy, nor does it even get all that graphic with only one of his kills shown throughout the entire thing and most of his other disturbing patterns left more to the imagination. Instead, we have an entertaining and effective look at how, for a brief period of time, Ted Bundy used his charm and charisma to convince the world that he was not the monster that he absolutely was.

Extremely Wicked, Shockingly Evil and Vile is an entertaining and effective look at the crimes of notorious serial killer Ted Bundy, which primarily focuses on how his natural charm and charisma briefly won people over to his side, and thanks to a sensational performance by a brilliantly-cast Zac Efron it’s easy to see why people could learn to love this beast.

Check out Extremely Wicked, Shockingly Evil and Vile showtimes in London
on Walloh.