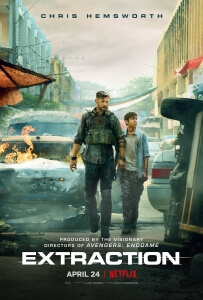 BASICALLY…: A mercenary (Hemsworth) is tasked with rescuing the kidnapped son of a crime lord…

To give you an idea of the kind of over-the-top action flick you’re in store for with Netflix’s Extraction, the lead character’s name is Tyler Rake. Joining the ranks of John Matrix, Chev Chelios and Mason Storm (all real action hero names, by the way), Chris Hemsworth’s latest starring role is the kind of action lead who you would most certainly find shooting his way through faceless villains and dropping badass one-liners in your typical John Woo or Jerry Bruckheimer production.

In a sense, you definitely get that kind of film here, complete with endless explosions and so much blood spurting out of gunshot wounds that you wonder if this script has been on ice since the 80s; however, what’s missing is a sense of freshness to a formula that’s occasionally put to good use here, but doesn’t contain enough stamina for it to stand solidly as its own thing.

For one, it starts off with a tiresome cliché that most action films – in fact, most films in general – should try to avoid if possible: Hemsworth’s Tyler Rake – again, his actual name in the movie – stumbles across a bridge, bloodied and bloody knackered, right in the middle of what appears to be a climactic sequence, and as soon as you start wondering what’s going on, sure enough the movie cuts back to two days earlier. Once you get over the initial frustration that the movie has effectively spoiled itself in the first few minutes, we see the events that led up to it, kicking off when Ovi (Rudraksh Jaiswal), the son of a rich and imprisoned drug lord in India, is kidnapped by Bangladeshi crime lord Amir Asif (Priyanshu Painyuli) and held for a hefty ransom. Rake, a mercenary, is called in to rescue Ovi and extract him from the city, all the while avoiding the corrupt police force, several of Asif’s own mercenaries, and Ovi’s father’s own personal henchman Saju (Randeep Hooda) who’s also been sent in to retrieve the boy.

Opening scene aside, which whenever this cliché is done in movies often feels like a cynical script note to contain some kind of action beat in the first few pages to keep the audience’s interest (and in this case to bring Hemsworth in early, who otherwise doesn’t show up for a good ten minutes after the movie starts proper), Extraction does cover a lot of ground that you’d normally find in an action movie like this. From the car chases to the rapid gunfire to the brutal fight choreography, you always feel like you’ve seen it all before, because you probably have, and in other action flicks which probably felt a lot fresher at the time because back then it wasn’t done as often as it is nowadays. There are numerous other clichés which the movie can’t avoid for its own good, which only further shows how worn and torn this particular formula has become, and it doesn’t even feel as fun as certain other movies of its kind because it carries around a stiff bout of self-seriousness that is in desperate need of lightening up a little every now and then.

That being said, the action here is on top form, and much of that comes from director Sam Hargrave who has previously been known as a stunt co-ordinator, among them the last few Avengers movies which, of course, also featured Hemsworth (as if that wasn’t enough of a Marvel connection, not only are Anthony and Joe Russo credited as producers here, but the latter is also the film’s screenwriter). Just from his previous credentials alone, you’ll know that this film is certainly going to up its game when it comes to visceral fight choreography and its general sense of action, and it very much does; the film’s biggest highlight by far is a 12-minute chase through the streets, roads and even buildings of Bangladesh, all edited to look like it’s been captured in one single take, kind of like if 1917 snorted a giant line of cocaine, and it is so smooth and intense just in how it’s all filmed that you wish the rest of the film had this level of energy the whole way through. Hemsworth, too, is the kind of actor who’s charismatic enough to carry a film like this in his sleep, and while he’s largely devoid of the sense of humour that brought him great tidings as Thor and in other big-screen ventures, he easily holds this movie together in a much more solemn turn than we’re used to seeing him play, but by no means any less physical (he gets into some kind of fight with just about everyone in this film, from crooked cops to street kids to David Harbour in an extended cameo).

For all the misgivings one has with the lack of fresh material, it’s filmed with a lot of passion and certainly packs a lot of impressive action into its reasonably short running time (the film itself is about 100 minutes long, with 15 minutes of credits). So, I’m kind of in two boats with this film; while there’s a good amount to appreciate about it, there’s also just as many thoughts about how this could have been a lot more compelling, had it not succumbed to an unfortunate number of clichés. If the overall story had a few more meaningful beats to it, rather than just following a pattern that many others have done before, then we could definitely have an action film that’s worthy of the talent involved both behind and in front of the camera. As is, it’s a largely mediocre action movie that’s fine for a good night in, with some truly inspired moments that constantly remind you of the kind of movie we could have gotten instead – especially one where the lead has a name like Tyler Rake.

Extraction contains some brutal but impressive action courtesy of director and former Avengers stunt co-ordinator Sam Hargrave, who directs star Chris Hemsworth to a lead performance that easily carries the movie, as well as bringing to life some truly intense sequences like an outstanding 12-minute one-shot sequence, but a script that lacks a real freshness to some otherwise worn and torn material means that said one-shot scene is merely a highlight in a largely mediocre action flick.