EXCLUSIVE: A TALK WITH HUGH HUDSON

EXCLUSIVE: A TALK WITH HUGH HUDSON

The following material originated from an article the writer had created for blog SoScript, the official website for Southampton Solent University students who study/have studied the BA (Hons) Screenwriting course. For the full article, click here. Otherwise, keep reading… 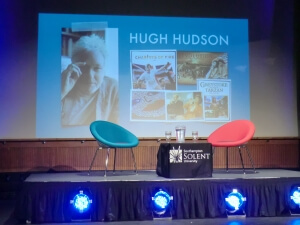 We all think the same things whenever we hear the title Chariots of Fire. The keyboard synthesiser musical score, the scene of men running down the beach to that music, and Rowan Atkinson’s comedic addition to an orchestra playing that music during the 2012 Olympic opening ceremony being just some of them (mostly consisting of that music).

But what most of us forget is that there was a man responsible for Vangelis’s classic tune in the first place. Hugh Hudson, who graced us with his glorious presence for a guest lecture at Southampton Solent University, was the director of the British smash hit as well as several other projects over a long directorial career. And from the opening show-reel of Hudson’s filmography onwards, Solent students were instantly mesmerised by the film legend sitting in front of them.

Over the course of one hour, Hudson gave anecdotes about his early days in the industry – from his inspiration after seeing a WW2 newsreel in cinemas at age six, to finding initial work as an editor – as well as other areas of media he pursued throughout his life such as various documentaries and advertisements. The latter he dubbed “industrial films” that served as “propaganda… created in order to sell the product” which, if one watches his bizarre surrealist ad for a cigarette brand starring reptiles, helicopters and a sardine dish, would not feel out of place during a commercial break during the Super Bowl.

But the heart and soul came through when Hudson spoke about his feature film archive. Aside from Chariots, his work has included Greystoke: The Legend of Tarzan, Lord of the Apes (1984), independent movie Lost Angels (1989), and recently-revived epic Revolution (1985). That last film was subject to much focus during the seminar; originally released as an unfinished piece by studios – for financial reasons, Hudson suggests, “because they had run out of money and needed a hit… no wonder it fell at the first post” – it was a critical and commercial disappointment. But like Heaven’s Gate before it, Revolution is slowly becoming more and more accepted within the film circle with critics such as Phillip French declaring it to be a forgotten masterpiece.

Also amusing were his put-downs of “über-producer” and “sentimentalist” Harvey Weinstein, who famously ordered a cut of Hudson’s My Life So Far (1999) against the director’s intended vision. The director’s original intentions won during the test screening phase, but Weinstein retaliated by under-promoting the film, ensuring it was gone and buried. Hudson notes, “He lost the battle, but he won the war.”

When speaking about Revolution, Chariots and all of his other work, Hudson gave some passionate advice to budding filmmakers:

Find something personal to make… emotions drive us all, be they love, anger or fear, and the more passion put into your project the more people will emotionally react to it.

After the talk, I was lucky enough to have a few words with Hudson about my Major Script project, and told him about my personal interests and passions towards writing it. What he told me I would prefer to keep mum about, but what I will say is that a man like Hudson who has endured a long and prosperous career follows his own mantra to a tee. And that is a very encouraging thing to hear from the one and only Hugh Hudson. 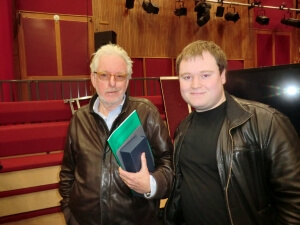