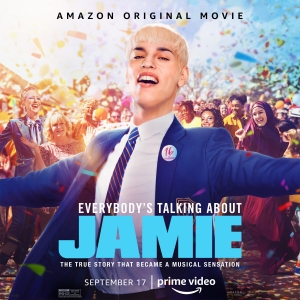 Another week, another movie headed to streaming instead of a planned theatrically-exclusive release. However, the new release pattern for Everybody’s Talking About Jamie doesn’t entirely boil down to the pandemic; the adaptation of the hit stage musical was originally set to be distributed by 20th Century Studios (now operating post-purchase by Disney) until it was removed from the schedule entirely, with news later following of Amazon’s acquisition of the title for a worldwide streaming (and limited theatrical) release. Rumours suggest that, while the pandemic was cited as the official reason for the transfer from one studio to another, Disney was perhaps reluctant to release a heavily LGBTQ+-themed movie underneath its own corporate umbrella – now, I have absolutely no idea if these rumours are true or not (and you really shouldn’t believe everything you read online), but if, for the sake of argument, they are indeed accurate, then Disney has a lot to answer for by denying this movie the widespread theatrical distribution that it deserves.

For one, the movie – like the stage production it’s based on, which is itself inspired by a BBC Three documentary about a very similar subject – is a riotous and heart-warming musical with a strong, powerful message of self-acceptance and a number of catchy, toe-tapping songs, the effects of which feel wasted on a living room TV as opposed to an immersive cinema screen. While some things might not entirely translate from stage to screen, Everybody’s Talking About Jamie is a entertaining and uplifting movie which people might want to seek out if they want a much-needed booster in their lives right now.

Set in Sheffield, our main character is a sixteen-year-old boy named Jamie (Max Harwood), an openly gay teen who is eager to leave his mark on the world by becoming a drag queen. He receives support from his caring mother Margaret (Sarah Lancashire) and his best friend Pritti (Lauren Patel), the latter of whom encourages Jamie to attend the upcoming prom in a dress after he receives some ruby-red sparkly shoes for his birthday, as well as aging drag queen Hugo (Richard E. Grant) who encourages Jamie to seriously embrace his inner drag desires. However, said desires are made tricky to accomplish by fierce opposition from school bully Dean (Samuel Bottomley), cynical teacher Miss Hedge (Sharon Horgan), and even Jamie’s homophobic father Wayne (Ralph Ineson) who wants absolutely nothing to do with his out-and-proud son – but none more so than Jamie’s own insecurities, which his newfound drag persona can’t entirely disguise.

The stage show has become a hot favourite amongst audiences since its 2017 debut, and the film makes it very clear as to why it is so beloved. The upbeat energy in the musical numbers is heavily infectious, with director Jonathan Butterell (who also directed the original stage production) lending real charm to its sweet and simple storyline, which screenwriter Tom McRae adapts from his own stage script with a largely aware shift from stage to screen. You also get to know and love a lot of these characters, who are brought to life here by wondrous performances from Sarah Lancashire, Richard E. Grant, and young newcomer Max Harwood as Jamie himself, all of whom are having tremendous fun with the material while also treating it incredibly seriously, as though they’re out to win a BAFTA for their work in this. There are plenty of great moments between Jamie and his mother, his friend Pritti, and even the school bully who gets put in his place on more than one occasion, since Jamie is character so adoring of who he is that simple schoolground taunts about his sexuality no longer bother him. As the protagonist progresses further to realising his dream of becoming a drag queen, the movie also makes good use of its visual medium to tell important sides of the history of such performance, particularly in a standout musical number that explores the HIV-AIDS era in typically heart-breaking fashion, though the gaze of an old VHS recording complete with fuzzy picture quality and dates in the bottom-left corner.

It is as much of a joyous musical as it undoubtedly is on stage, but there are aspects to the story and some of the aesthetics which don’t work quite as well on film. There are a few dialogue deliveries which are clearly meant to be applause lines for the audience to react to, which might be appropriate in front of a live audience, but in front of a camera it’s a little awkward as characters pause in places where a non-existent audience is supposed to cheer or laugh. Some of the musical numbers, while well-performed by the cast and chorus of backup dancers, also tend to leap from one stylistic experiment to another; a vanilla singular set-piece can be followed by a surreal and artsy nightmare, creating a slight structural hiccup as the film occasionally struggles to settle on a particular voice for its colourful and abrasive songs. There are also more than a few characters who barely break through their one-note personas, which could have perhaps been explored more thoroughly or at least given some kind of meaningful arc. Instead, characters like the school bully and Jamie’s irredeemable father remain antagonistic pretty much throughout, with no hint of any extra dimension whatsoever. It’s fine to have them be this way on a stage, where stuff like background for certain characters can be glossed over almost entirely, but in a film there is room for expansion on some of these things, and the movie doesn’t care much to do that at all.

However, Everybody’s Talking About Jamie remains a lively and entertaining musical that’s easy to like and even easier to be charmed by, with its strong messages of acceptance and being true to oneself which, regardless of your sexual orientation, should be inspiring enough to give in to your greatest internal desires. It’s recommended viewing if you need to watch something uplifting and crowd-pleasing, but if you do have the opportunity to watch it in a cinema – where it always should have headed, no matter what Disney says – please do, for you’ll get the full experience of Everybody’s Talking About Jamie without actually being in a theatre to watch it live.

Everybody’s Talking About Jamie is an upbeat crowd-pleaser of a movie musical, adapting the hit stage production with plenty of charm and camp energy to go around, although some aspects perhaps work better on stage than in film.

It is also available to stream on Amazon Prime Video.