Everybody Wants Some!! (Review)

Everybody Wants Some!! (Review) 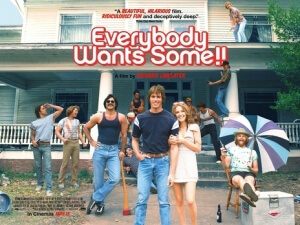 BASICALLY…: College freshman Jake (Jenner) experiences the care-free lifestyle of his newfound friends, and learns what it takes to survive higher education…

Like the very best of writer-director Richard Linklater’s ever-diverse portfolio, Everybody Wants Some!! is a film about nothing but people talking with each other about things that they like doing, their opinions on the wider world around them, and just generally slacking about while building a strong rapport between them – but because you’re so enjoying watching these people with their own personalities interact with one another, or even just doing things individually, you end up not at all caring in the slightest that plot is the last thing on its mind.

After all, plot is not the reason this film – intended by Linklater to be a spiritual sequel to his own Dazed and Confused – exists; it’s to showcase an experience of what it’s like to be first given a taste of freedom as a young adult, away from the obstructive systems of high school and living at home with family, and settling in to independent living and getting to know the people you’re going to be spending your time at university with. With that in mind, what the film sets out to do it succeeds in doing while being effortlessly charming, funny and feel-good in its own right to make you just as comfortable as the newer faces in this situation end up being.

The main new face, freshman Jake (Blake Jenner), is first shown arriving at a somewhat dilapidated house meant to play host to a college baseball team during the early 80s. There, he meets several of his housemates including, among many others, ladies’ man Finnegan (Glen Powell), who likes to brag about his “average” penis size in order to put on a humble appearance in front of girls, resident stoner Willoughby (Wyatt Russell), who has an endless collection of both marijuana and VHS-recorded Twilight Zone episodes, and the moustachioed “Weird” Al Yankovic lookalike Jay (Juston Street), whose increasingly aggressive behaviour makes him a wild card amongst the housemates. The majority of them quickly welcome Jake into their collective group, and over the course of a long weekend before class starts, they embark on a non-journey across several clubs and campus parties where they all learn what works best for them now they’re in a much more independent way of life.

Anyone who has ever gone through that adjustment period of starting university for the first time will immediately find some familiarity in what these characters get up to here. Everything from the initial awkwardness of meeting your housemates for the first time, to exploring your new environments with such a wide-eyed approach, to trying new things you never thought you’d ever try in your life up until this point, is all represented lovingly here, and in a way that is eerily nostalgic to anyone who has gone through the same thing as these characters do. After all, that brief period of arriving at university and manoeuvring around its ways of life with new and exciting people is a rite of passage for anyone in that situation, and through clever writing and direction on Linklater’s part it’s far more natural than other Hollywood films would have you believe. Sure, there’s a bit of cheesiness here and there – at one point, Finnegan works his charm to convince a pair of party girls to partake in a mud wrestling match – but what is college/university life without a bit of cheesiness every now and then?

The nostalgia factor of Everybody Wants Some!! will also effortlessly work its way into anyone who grew up in the early 80s,  and not just through its anthem-heavy soundtrack with songs by Queen, Blondie, Hot Chocolate and of course the title track by Van Halen. Little things here and there from the disco-heavy nightclubs to characters’ collections of vinyl recordings to the seemingly endless parade of arcade games including Space Invaders and several pinball machines will also be enough for any 80s survivor to go bananas for this film, as well as anyone who didn’t grow up in that decade (this reviewer was born in the early 90s, and even they were getting chills with the sharp attention to detail that Linklater gives to this movie to make it seem like a proper 80s movie).

At this point, especially after the masterpiece that was Boyhood, Linklater can pretty much make anything he wants by this point, and you know what? We will happily go see whatever he ends up making, whether it’s new stuff like this film or going back through some of his older collection like the Before trilogy, Waking Life, Dazed and Confused (heck, ESPECIALLY Dazed and Confused) and countless others, precisely because he is a filmmaker that seems to truly understand life and what people do to work around it much more than so many pretentious arthouse freaks who claim to know everything there is to know on this green Earth. Linklater, with all his films and now with Everybody Wants Some!!, lacks any pretence and remembers to have fun with what he’s saying rather than shove the spiritual message down our collective throats; thereby making a much more consumable and overall satisfyingly tasty product.

Everybody wants some, and we want some too.

Everybody Wants Some!! is a highly enjoyable comedy by Richard Linklater that will provoke a healthy sense of nostalgia within anyone that’s a sucker for 80s culture, and also from anyone who’s gone through the trials and tribulations of starting higher education for the first time and come out clean on the other side. It’s fun, funny, and endlessly likable; it’s another hit for the filmmaker who’s had nothing but fun and likable hits in his career thus far.