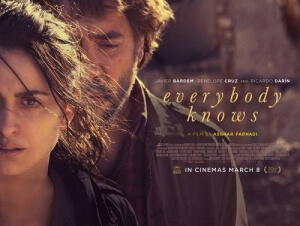 BASICALLY…: When her daughter is kidnapped during a family wedding, Laura (Cruz) enlists the help of her family, and her former lover Paco (Bardem), to help get her back…

It’s extremely rare for a real-life acting couple to perform together on-screen, but even rarer is to do so nine times – that’s the figure reached by Penélope Cruz and Javier Bardem, who began acting with one another in the 1992 Spanish dramedy Jamón Jamón, and between then and now have not only gotten married and had children, but collectively they’ve also worked with top directors including Pedro Almodóvar, Ridley Scott and Woody Allen, to name a few.

Their latest film appearance together is in the latest film by writer-director Asghar Farhadi – a two-time Oscar-winning director who won for Iranian films A Separation and The Salesman – and it is a project that brings out the best in both of their acting abilities. However, Everybody Knows is not just a showcase for Cruz and Bardem, but also an engaging and even suspenseful drama which, despite its occasional dips into melodrama, is interesting enough to just about hold your attention.

Cruz is Laura, who travels from Argentina with her two children including teenager Irene (Carla Campra), back to her home town in Spain for a family wedding, while her husband Alejandro (Ricardo Darín) stays behind for work reasons. Meanwhile, Bardem is Paco, a winemaker who reunites with Laura when she returns, and although the two were former lovers back in the day they are (seemingly) on good terms with one another. The wedding occurs and everyone’s happy – but that night, Laura is left devastated when Irene is kidnapped and she receives a text demanding 300,000 € and saying that they’ll kill her if she or anyone tells the police. As Laura, Paco and her family desperately try to find a way to help bring Irene back safely, many secrets are revealed that prove to be just as devastating.

The movie works best when it’s just being a straightforward drama about this child abduction situation; it never goes quite as dark as something like Prisoners, but the mystery surrounding who could have taken her and why is largely sidelined for a more intimate look at a family going through grief and immense stress during this scenario, and the extremes they consider going just to get the kidnapped person back. You feel for these people who are just helpless throughout this whole thing, and even when they’re acting out and being rather hostile it’s all for entirely understandable reasons, and a huge part of why it works as effectively as it does is because the acting here is truly outstanding. Cruz and Bardem are both excellent together and individually, and although they do not play a married couple in the movie, their chemistry is so strong here that you’d seriously think they were always together in this story; supporting standouts include Ricardo Darín as Cruz’s seriously stressed husband, and Bárbara Lennie as Bardem’s put-upon partner who, as the plot thickens, becomes ever more disconnected from her lover once certain skeletons come pouring out of certain closets.

It is said collection secrets, unfortunately, where the movie doesn’t entirely have the strength it needs to sprint towards the finishing line. The film’s biggest twist is extremely easy to figure out, well before even the kidnapping itself takes place, and because your own detective work has surpassed that of the film’s characters you do find yourself sitting there waiting for them to catch up with you, which is quite a way into the film. Most of the others, especially in how they are executed, feel like reveals you would see in a cheesy Spanish telenovela, only here they’re playing it as though it’s a genuine Oscar contender, which on the one hand I kind of respect but on the other it makes it seem so narratively trite and corny that it doesn’t feel so believable in this reasonably grounded environment that Farhadi appears to be aiming for. It largely feels as though all of these significant twists and turns have been added just to make it feel a lot more dramatic, when really the idea of a family going through grief and stress due to this kidnapping really would have been enough; when you add reveals which are blatantly designed to draw audible gasps from the audience, it makes itself seem way more aware of itself than actually dramatic, and again you’ve more than likely already figured out what the biggest trick hiding up its sleeve is so you’re mostly just waiting for the movie to catch up with you rather than surprise you as it clearly intends.

It is a flawed movie, and a noticeable decline in overall quality for Farhadi, but for the most part I still enjoyed the ride I was experiencing with seeing some great actors work opposite one another flawlessly, and a story that I found myself invested in and characters who I did actually want to see experience a satisfying conclusion. It delivered just the right amount of thrills and levels of intrigue I expected from this film since hearing about it, and while it’s probably not going to go on and win any awards any time soon, it’s still a pretty decent flick that anyone who’s previously enjoyed the work of this director, and especially these actors, will most likely approve of.

As for Cruz and Bardem, their ninth on-screen collaboration is a solid entry into their shared filmography, and whenever they decide what they want to do their tenth, it will be interesting to see whether it will rank above or below Everybody Knows, because either way the bar has been raised noticeably high.

Everybody Knows is a solid and intriguing crime drama that marks the ninth on-screen collaboration of acting couple Penélope Cruz and Javier Bardem who both do outstanding work here, although the high levels of drama tend to feel rather like a Spanish telenovela, which doesn’t make it as strong as writer-director Asghar Farhadi’s most recent work.