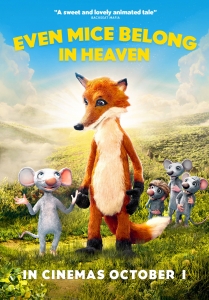 BASICALLY…: A mouse (Nonnenmacher) and a fox (de Bouard) become friends when they end up in the animal afterlife…

“What happens when we die?” is probably one of the first questions that parents receive from their curious child, and is definitely one that some will struggle to answer. Luckily, they can just plonk their kids in front of a screen showing Even Mice Belong In Heaven, which should give them enough material to keep them quiet about the morbid topic, but also provide them with valuable life lessons and a simple yet rather pleasant story for them to enjoy.

To soften the blow for its young audience, the Czech stop-motion animated film focuses purely on the animal afterlife, which is where a young mouse named Whizzy (whose English voice actor escapes me; the actors listed above are from the French dub of this movie) and a fox named Whitebelly end up when they are struck by a car during a chase between the two. At first, Whizzy wants nothing to do with her fox companion, blaming him for her sudden demise and also on the basis that he is a fox and therefore inherently evil – plus, a nastier fox killed her father when she was a baby – but as they make their journey across the wondrous heavenly plains, they learn to set aside their animal instincts and become friends.

For a movie about death, it is a rather optimistic film, one that isn’t too challenging for families but also not ignorant of the raw emotions surrounding it. Death is a very hard-hitting subject, especially for children who might not fully understand the very concept of dying, and what Even Mice Belong In Heaven does well is highlight how natural and even necessary it is for all living creatures to one day pass on, without going into too much morbid detail or leaning heavily on the emotional angle. It is a very straightforward explanation that children can easily understand, and one that adults can appreciate receiving from something that otherwise remains largely kid-friendly.

The plot, despite falling prey to a few familiar animated movie conventions – specifically the mismatched pair that has to go on a journey together – is pleasantly simplistic, as are its characters who have easily identifiable personalities and who you do sympathise with in emotional scenes because they’re sweet and endearing enough to be around. The dubbing on this English version can sometimes make the characters seem more annoying than they’re written to be, but that’s less on the overall writing and just how the English voice actors – who, again, I wish I could find out more information about – have been told to deliver their lines in the recording booth. There are also some valuable morals for children to learn about bravery and friendship, with both main characters dealing with their own fears and how they treat others when they don’t want to appear too soft, which are again handled in very basic but digestible doses.

Then there is the animation, which is rather stunning and also highly impressive. It is the kind of stop-motion you’d find in a film like Fantastic Mr. Fox, where a lot of it has clearly been crafted by hand (except for a few shots where it’s clear that CGI was brought in to help finish the shot) and where every last detail right down to the wind rustling through the grass looks as though it might have taken at least a few days to perfect. It fits nicely alongside the cartoony designs of the animal characters and some of the sets ranging from luxury bath springs to a fun amusement park, to a dark and intimidating forest that plays host to scenes which may be a bit intense for some of the much younger viewers.

You should not go in expecting to receive deep and meaningful discussions about death or anything like that, because that really isn’t what this movie is setting out to be. Even Mice Belong In Heaven is primarily a film made for children, and keeps itself free of such complex ponderings that would otherwise go straight over their heads. However, that isn’t to say that both kids and adults shall find nothing of value here; whether it’s the sweet and charming story or the gorgeous animation, it’s a good and noble film that deserves some attention from animation buffs for being a pleasant example of the incredibly sophisticated stop-motion craft on display. Its basic simplicity might not sit well with the more intellectual viewers, but that’s why afterlife movies like Coco and Soul exist opposite Even Mice Belong In Heaven, so that they can take their philosophical views away from a film that has only its straightforward and endearing nature to offer in its place.

Even Mice Belong In Heaven is a sweet and simple family film that explores the nature of death in a straightforward but optimistic manner, while boasting impressive stop-motion animation to tell its charming story with equally endearing characters that younger viewers can easily be enchanted by.

Even Mice Belong In Heaven is now showing in cinemas nationwide – click here to find a screening near you!