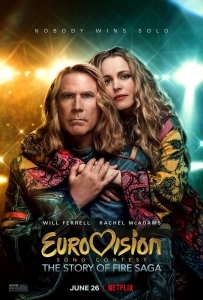 BASICALLY…: Icelandic musicians Lars (Ferrell) and Sigrit (McAdams) are chosen to represent their country at the Eurovision song contest…

The world feels like it’s on fire right now, and not just because of this late June heatwave; COVID-19 has spread like wildfire across the globe, protestors have taken to the streets to demand racial justice and police reform, and public trust in major politicians and governments has never felt lower. It’s a mess out there, and we desperately need something to make the world feel right and whole again until things can start to fully get back to normal.

That something, believe it or not, is the latest comedy on Netflix which combines the two most unlikely sources – Will Ferrell, and the Eurovision Song Contest – for a film that oddly works despite its flaws, and more importantly gives a sense of joy that we sorely need right now.

The film – or, to give its full title, Eurovision Song Contest: The Story of Fire Saga – follows the titular Icelandic band, made up of long-time Eurovision fanatics Lars (Ferrell) and Sigrid (Rachel McAdams) who, despite their clear passion for music, are largely seen as a joke and embarrassment in their small town, especially by Lars’ father Erick (Pierce Brosnan). Fate comes knocking, however, when they are invited to participate in a local singing competition where the winner gets to represent Iceland at the upcoming Eurovision contest in Edinburgh, and after a fiery tragedy surrounding the other contestants they are swept away to the big leagues where their dreams are on the cusp of coming true, and where they encounter other contestants such as flamboyant Russian Alexander Lemtov (Dan Stevens) who starts to come between the inseparable pair.

It should be said that if you’re going in expecting the same style or level of humour as past Will Ferrell comedies like Anchorman or Step Brothers, that’s not really what this movie is; though there are smidges of outlandishly silly moments here and there like in those other movies, it’s mostly played straight (for a comedy, anyway) and more like a typical crowd-pleaser than a full-out laugh-fest. It feels a lot more sincere in that regard, showing that Ferrell and director David Dobkin clearly hold something like Eurovision close to their hearts, and instead of opting for the easy route by making fun of its insanely over-the-top flamboyancy, they actually celebrate the joy it brings without a cynical bone in their collective body. Every performance we catch glimpses of feels just as spectacular and passionate as the real thing, and not once does the film point and laugh at any of them but rather cheers them on, because it knows they are what make Eurovision as beloved as it is (even if it’s on an ironic level), and so it just lets them be themselves without compromising for a less-aware American audience.

It’s one of Ferrell’s most meaningful comedies in a long time, and also one of his more empathetic performances; it should go without saying that this is leagues ahead of the awful Holmes and Watson, but in a way that terrible film must have been something of a blessing for Ferrell because it shows once and for all that audiences want more than just his usual irritating man-child humour, and his more straightforward and hapless turn here feels like a step in the right direction. It relies less on just screaming and shouting half of his dialogue (though there is a little bit of that here as well), and more on the blind dedication that his character has towards his goal, and his chemistry with a rather adorable Rachel McAdams, who feels like an equal to Ferrell in both comedy and dramatic chops, is likeable enough to make you feel comfortable in rooting for them to make it as far as they can in this contest. It helps that the songs they perform are also quite catchy and genuinely toe-tapping; McAdams’ vocals are performed by Swedish singer Molly Sandén, and not only does the actress sync up well with the actual voice but Sandén’s vocal range is powerful and even awe-inspiring, to a point where you actually wonder if one of these songs might be remembered come next awards season.

Admittedly, the film does stick to a familiar formula that’s easy to predict, and it’s true that the film doesn’t have quite as many laughs as it probably should, but I am willing to overlook those things because the film succeeds in just being a fun and joyful experience. There is an entire sequence in this movie where everything stops dead so that cast members – and even some past actual Eurovision stars – can sing and dance to a melody of songs in front of the camera, which in any other movie would feel extremely out of place and pointless, but here it actually works because this whole world that we’re in is just so full of eccentric life that it would honestly be shocking if something like this didn’t happen at some point. While it’s not an especially hilarious comedy, it’s one that leaves you with a good feeling inside as well as a hope that there are some people out there whose passion for life is so strong that it can overturn the stony heart of any hard-boiled cynic, and honestly that makes this one of the more pleasing movies you could find right now on the streaming service, because by God do we need something as crazy by joyful as Eurovision right now in our lives.

Eurovision Song Contest: The Story of Fire Saga might not have the most original plot or the most consistent laughs in the world, but its celebratory approach to the joyful eccentricities of the popular singing competition, as well as meaningful turns by both Will Ferrell and Rachel McAdams, more than make up for its flaws by being a genuinely uplifting and sincere comedy that anyone can easily enjoy.

Want to decide what the movie’s like for yourself?
Check out Eurovision Song Contest: The Story of Fire Saga
via