Eternals (Review) – Marvel’s Most Ambitious, But Flawed, Project Yet 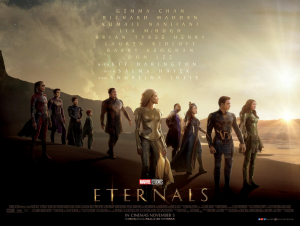 BASICALLY…: A group of immortal beings come together to protect the world from an oncoming threat…

Well, it had to happen at some point: after thirteen years and twenty-six films, the Marvel Cinematic Universe finally has an entry with a “Rotten” critics’ score on Rotten Tomatoes (49%, as of writing). The culprit is director Chloé Zhao’s Eternals, a millennia-spanning superhero epic based on characters created by comics legend Jack Kirby, which some have praised for its scope and ambition, but blasted for its overstuffed plot and underwhelming characters.

Often I try and stay away from reviews like these, so that I can go in to films with more of an open mind, and I’m honestly glad that that I did, for while Eternals is definitely not among the top-tier Marvel entries, there was a surprising amount that I did genuinely respect about this film, even when it wasn’t entirely working.

The film takes us back to the very beginning of time, when a group of superpowered immortal beings known as Eternals arrive on Earth to protect its people from a monstrous race known as Deviants. The group is led by healer Ajak (Salma Hayek), and the team consists of matter-warping empath Sersi (Gemma Chan), laser-eyed Ikaris (Richard Madden), cosmic-projecting fighter Kingo (Kumail Nanjiani), illusion-casting Sprite (Lia McHugh), technology inventor Phastos (Brian Tyree Henry), deaf speedster Makkari (Lauren Ridloff), mind-manipulator Druig (Barry Keoghan), strengthened Gilgamesh (Don Lee) and warrior Thena (Angelina Jolie). The Eternals decide to remain on Earth and help humanity progress, under strict instructions not to interfere with significant events in their timeline by their ruler, the giant Celestial Arishem; however, in modern day, they find that the Deviants have returned, and that plans are underway for a cataclysmic “Emergence” that threatens all life on Earth, and so they must all reunite to take on the threat.

One of the things I really do appreciate about this film is that it is clearly trying to set itself apart from most of the Marvel movies that have come before it, with director Zhao bringing a real sense of her other-worldly direction that won her awards galore for her previous film Nomadland, to a cinematic universe that has yet to fully embrace the auteur approach. The film certainly looks gorgeous, with some stunning on-location cinematography and wistful visual effects that add to the massive scope this movie is attempting to establish; however, it has to be said that there are often times when the sheer weight of its ambition threatens to collapse upon itself, with a script that clearly has plenty of ideas but no clue as to which ones it should fully focus on. The writing can seem clunky as a result, drowning in exposition and leaving certain elements within the plot either unresolved or not given much time to develop, resulting in certain turns or surprises feeling rather random despite technically having been set up earlier.

Then there is the issue surrounding the complexity – or lack thereof – with the characters, and the truth is that there are simply too many characters being introduced all at once, like we’re watching the first Avengers movie if the previous standalone movies didn’t exist. Not a lot of time is devoted to many of these heroes in order to establish some kind of personal connection, or really any definable individual personalities, so a number of the characters here do unfortunately fall flat, like Angelina Jolie as a hero who we are never explicitly told what she brings to the fight or why she suddenly has psychotic episodes out of nowhere. Some characters do work, particularly Kumail Nanjiani’s Kingo who has used his immortality to pose as a legendary dynasty of Bollywood performers, and Brian Tyree Henry who has one of the film’s more compelling arcs as the first LGBTQ+ superhero in the MCU, but more often or not they’re drowned out by others who lack significant development or are just bland. Had the movie picked just a few of these people to truly focus on, then maybe the roster wouldn’t feel so rusty in the final product.

All of that being said, however, I still cannot bring myself to fully come down on this film. Of the Marvel movies to date, it may be the most flawed, but there is a certain level of admiration I have for it that I can at least get behind. Some of the ideas that the movie has, as clustered as they may be, are genuinely intriguing and do make things a little more interesting than some people are making them out to be, with certain moral issues like free will and authority coming into the conversation to spice up some of the more traditional superhero ethics. I enjoy the truly epic scope that this movie has to offer, with its giant set-pieces and lengthy runtime giving it the feel of a major modern epic. Even the characters, despite many of them not being as three-dimensional or instantly iconic as Iron Man or Captain America, are still likeable and easy enough to root for; although some of them don’t factor as well as they should, I don’t have a problem seeing how they may fit into future MCU instalments (if at all) and possibly encounter some of the wider heroes this universe has to offer. The mid-credits scenes certainly play into their longevity within the MCU’s future, especially with the introduction of one character who is set up to be a pretty important player later on (and played by someone who is bound to get certain demographics squealing in their seats).

Admittedly, because I am such a fan of the Marvel Cinematic Universe and its mechanics, perhaps my opinions on Eternals is a little biased. Maybe that’s the power of the MCU; even when it’s probably at its weakest, there is always something to admire about what the filmmakers, writers, visual effects artists etc bring to each and every individual film, ensuring that no matter how messy the material, it’s never entirely boring. From that perspective, I do respect Eternals as a noble experiment that didn’t produce the best results. For anyone else expecting the next great Marvel movie, maybe wait until Spider-Man swings back into cinemas next month.

Eternals is Marvel’s riskiest project to date, and while it doesn’t produce the best results in the studio’s history – clunky writing and underdeveloped characters being the more notable ones – there is still a fair amount to respect about its noble ambition and epic scope that director Chloé Zhao does her best to instil within this cinematic universe.

Eternals is now showing in cinemas nationwide – click here to find a screening near you!