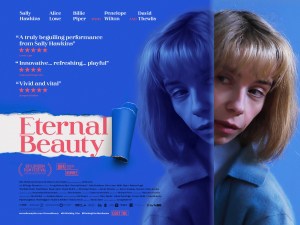 BASICALLY…: After being left at the altar, Jane (Hawkins) falls into despair over her schizophrenia, until she encounters new sources of love and life…

Depicting mental illness on-screen is a tricky feat, because if you make one false step then expect to be flooded with complaints about inaccuracy or insensitivity, although that hasn’t stopped a number of filmmakers from treading into that minefield every so often. The latest to do so is Craig Roberts, the actor best known for films like Submarine and The Fundamentals of Caring, who steps up his game for his sophomoric directorial outing (following his debut feature Just Jim) with a highly unusual and often puzzling depiction of paranoid schizophrenia, which is just about held together by a deeply committed central performance by Sally Hawkins, although the film itself could have used a bit of fine-tuning in other areas.

Hawkins plays an anti-social woman named Jane, who lives a very isolated life after being stood up at the altar as a younger woman (Morfydd Clark, soon to be seen in Saint Maud). Her resulting depression has morphed into a constant state of delusion, much to the frustration of her dysfunctional family including controlling matriarch Vivian (Penelope Wilton) and Jane’s sisters, kindly Alice (Alice Lowe) and mean-spirited Nicola (Billie Piper). As Jane struggles to cope with her illness – something which isn’t helped by her reluctance to take her pills – she soon meets a kindred spirit in musician Mike (David Thewlis) who also has some mental health issues, and starts to come out of her shell a little bit more.

Roberts adopts a quirky visual style that’s not unlike Wes Anderson or even his Submarine director Richard Ayoade, with fantastical elements such as surreal conversations with another unseen person on the other end of a telephone line suddenly taking over from the main narrative, in a unique approach to such a serious illness. The effect is certainly strange, since it is not always held to a traditional story structure and can feel like it’s one surreal moment after another, although Roberts doesn’t drive the style into the ground like a soulless Anderson knock-off would, and instead uses it to display what the world probably looks like through the eyes of its incredibly damaged protagonist. The quirky approach may give off the wrong idea that the film is making light of something serious like paranoid schizophrenia, but Roberts’ intent is clearly to shed light on the everyday struggles someone with such a condition can experience, and it often does it with an oddball sense of humour that’s certainly quirky but also honest in a lot of aspects.

If there is a shining beacon in this film, it’s definitely Sally Hawkins; in a performance that sees her play someone who clearly needs a lot of psychiatric help, especially when the voice she hears down the phone keeps telling her to steal her young nephew away, she doesn’t make the character too overbearing, but also not too sympathetic. The character is deeply damaged, but strives to keep a lively persona, no matter what everyone else around her thinks, and the actress delivers a stunning turn that manages to be unhinged enough to definitely seem crazy, but not too over-the-top to belong in a mental asylum. She’s really giving it her all here, and as a result she elevates the material in dazzling manners.

As good as the lead performance is, and as good-intentioned as the film may be, Eternal Beauty doesn’t quite strike as hard as it could have. It’s a strange film to try and watch, and I can even see it dividing audiences who may feel that the quirky style drags its serious subject matter under the surface. There’s an airiness to the film that can be difficult to try and drag back down to the ground, and at times I found myself getting a little antsy over the lack of a clear endpoint in this story about a mentally ill woman and her dysfunctional family. I admire what the filmmakers were trying to accomplish with this movie, especially when handling such sensitive material, but ultimately it didn’t connect with me as much as I hoped it would.

It’s not like it’s a bad movie, though; Roberts’ direction is solid, the script has a sense of ambition, and again the performances – particularly from Sally Hawkins – are sublime, but in the end I don’t think it’s really for me.

Eternal Beauty is a strange yet light depiction of mental illness, in particular paranoid schizophrenia which, to the credit of both director Craig Roberts and lead actress Sally Hawkins, is portrayed decently enough to get by, but its oddball nature isn’t easily accessible to all audiences, who might end up being divided over its intentions.

Want to decide what the movie’s like for yourself?
Check out Eternal Beauty showtimes in London
via