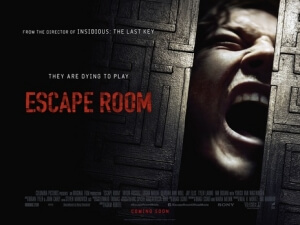 BASICALLY…: A group of strangers are trapped together in a series of deadly escape rooms that contain puzzles they must solve to avoid being killed…

Continuing Sony’s current tradition of capitalising on current trends such as emojis, the Slender Man mythos and Angry Birds, is a film that takes the concept of escape rooms and cranks it up a notch. That would be fine, if only for the fact that this movie kind of already exists; in 2017, there was another horror movie also called Escape Room that pretty much had the exact same plot as this, and you can even find it on Netflix if you don’t believe me. So, I guess the big puzzle that the characters in this movie should be solving is who’s going to be the first to file the lawsuit against the other, because something tells me that someone – whether it’s Sony or the people who made the other Escape Room movie, whoever made their one first – is going to get sued over this, especially after it debuted to decent reviews – at least, compared to past January horror movies – and strong box office in the US, where it’s already made more than twice its $9 million budget back.

Now, I’ve not seen the other movie with this same title, but after seeing Sony’s Escape Room I wouldn’t be surprised if it turned out to be less fun than this movie was, even though it perhaps does take as much advantage of its set-up as it could.

The film sets itself up by inviting a collection of strangers – including shy college student Zoey (Taylor Russell), schlubby store stocker Ben (Logan Miller), cocky trader Jason (Jay Ellis), war veteran Amanda (Deborah Ann Woll), former miner Mike (Tyler Labine) and escape room enthusiast Danny (Nik Dodani) – to a building that homes an escape room that will award $10,000 to one winner. The six strangers soon realise that the several rooms that they are forced to play in have deadly consequences, and that they must all solve the various puzzles if they are to make it to the next room before the trap set for them in the current room claims their lives.

Rather than going full Saw with the violence and deadly nature of these increasingly dangerous traps, Escape Room fixates itself more on the puzzles that the characters have to solve, making the film a more adventurous and brainteasing game as you’re there trying to figure out the clues along with them. In a way, it’s good that they didn’t go the Saw route because if they had kept all the gore and stuff in, then it really would have felt like a more neutered version of that series, and for the most part the puzzles that we are faced with are pretty inventive and the rooms themselves are ones that the production design team clearly had fun coming up with. The characters and performances are likeable enough to get you through a lot of it as well, and when a character does something that is considerably less bright than his counterparts it’s for an understandable reason which doesn’t leave you annoyed with them for doing something pretty stupid in this literal game of life and death. I enjoyed how they all worked together to not just solve the puzzles but to also come to terms with the problems in their own lives; scenes of them swapping stories with each other, brief though they may be, are vital to their arcs being fleshed out a little bit more than the average January horror movie, and as you learn a little more about these people the more you do kind of want them to make it out of this with their lives intact.

For about two-thirds of this movie, I was reasonably entertained and found myself enjoying these different puzzles that the characters had to solve in order to progress further; however, around the time that the third act comes into play, things begin to fall apart rather substantially. There’s a reveal about who is behind these sinister escape rooms and what they are doing it for that comes abruptly into the picture, in an exposition dump that remains vague while still giving us a few crucial answers, and it feels like whoever wrote this was struggling to come up with a compelling enough resolution, so they watched a few episodes of Black Mirror for inspiration and just did something along those lines. It’s also pretty clear that the intent is to set up a franchise (and give it’s already made more than double its budget at the US box office alone, I think you can count on there being another one of these movies), especially in how the film ends with a conclusion that is nothing but sequel-baiting, which is as though the studio saw potential and then coerced the filmmakers into adding it in during post-production. I’m not going to lie, if they did make another Escape Room movie I wouldn’t be opposed to the idea – after all, there are possibilities to this idea that not even this film manages to take advantage of  – but they didn’t need to make it so obvious that this was their intention during the final minutes of this first film, which really takes you out of the movie when it really needed to properly wrap up certain story arcs.

It kind of suffers from the same problems that The Amazing Spider-Man 2, another Sony product, also had; a perfectly decent standalone flick, but there was way too much stuff crammed into it that only served to set up several other movies further down the line, and it ends up being a somewhat confused mess. Unlike that movie, however, at least we’re probably going to actually get a follow-up to Escape Room, although this being Sony they still might cock it up as much as they did Andrew Garfield’s run as Spider-Man, and if that does indeed happen then it shows that when it comes to perfectly fine ideas such as this, Sony will always find a way to somehow ruin it beyond repair.

Escape Room is a reasonably entertaining movie with some good performances and creative puzzles, but a third-act reveal which only serves as a launching pad for a potential franchise really takes you out of the film and leaves you only looking at a studio’s painfully obvious plea to turn this into the next big ongoing horror series.