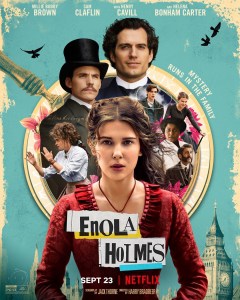 Unlike the rest of us, Millie Bobby Brown is not simply waiting about for the fourth season of Stranger Things to kick back into production. The young breakthrough star of the hit Netflix series has made herself busy by re-teaming with the streaming service for a new project that she not only headlines but also produces, and it’s an intriguing one to say the least – you could even say it’s elementary, my dear.

Brown dives head first into Arthur Conan Doyle territory with Enola Holmes, based on the book series by Nancy Springer which, like the movie, spins off from the classic Sherlock Holmes mythos and presents a fresh, feminist perspective that’s endearing, sweet, and plenty of fun.

For all her life, Enola Holmes (Brown) has lived in a remote countryside manor with her mother, Eudoria (Helena Bonham Carter), as her primary teacher of everything from science to self-defence. On her 16th birthday, however, Enola wakes to find that her mother has suddenly disappeared, and slightly more concerning her two older brothers – Mycroft (Sam Claflin) and Sherlock himself (Henry Cavill) – have arrived to put what they feel is right; i.e. send Enola off to finishing school to become a proper lady. Of course, the emboldened Enola is more eager to solve the case of her missing mother herself, and by springing into action she wanders into a larger conspiracy surrounding a runaway young lord (Louis Partridge) and a force that is seeking to get rid of him at all costs.

It is a playful and immensely likeable spin on the classic Holmes mystery, one that earns points for introducing a fresh new character that’s easy to root for rather than the stoic lead detective we’re all used to – although in his all-too-few scenes as Sherlock, Cavill does make a strong case to play the famous sleuth in a more straightforward Sherlock Holmes movie – and a couple more so for having a lead creative force who is clearly passionate about the material. The titular role is by far the furthest Millie Bobby Brown has ventured from the likes of the much more muted Eleven in Stranger Things, and she has a remarkable screen presence that’s charming, funny and quite often self-aware, the latter coming from her frequent addresses to the audience as though we too are a character in the movie (a motif, no doubt, brought to the table by director Harry Bradbeer, who directed virtually every episode of Fleabag). Her turn here beams with self-assuredness, not to mention she shares strong chemistry with just about everyone she acts opposite here (her repertoire with Louis Partridge, also a sweet presence, is a nice addition), and as a producer she no doubt brought some of this passion to the creative process, which you can tell by the liveliness of Jack Thorne’s script which puts a real spring in the adventure aspect, and gives the lead actress a lot of enjoyable dialogue and set pieces to work with.

The film is definitely entertaining, with a very likeable lead performance and a fresh enough spin on the familiar material, though perhaps it could have done with a bit of fine-tuning to line itself up with its namesake. The central mystery isn’t as deep or complex as some of Doyle’s most famous stories, and if you’re the kind of eagle-eyed viewer who can pick up on certain clues early on, then you will probably have solved the mystery before the characters even begin to figure it out. It’s also one of those female-driven films which really like to hone in on the central message of equality and respect when it comes to the opposite sex; some characters’ entire dialogue is made up of soapbox lines that are only there to make the audience stand up and applaud, which tend to stop the film dead in its tracks to claim its wokeness when really we just want to watch the movie. Female empowerment is, and always shall be, a great positive message to spread, but when it’s all that is being said, instead of giving us a story and characters we should be caring about, suddenly it becomes less of a movie and more of an unnecessary political platform (though, frankly, it never gets as tedious as it does in last year’s Black Christmas remake).

When it isn’t stopping dead to drill in its central message, the film does remain consistently entertaining, and even though the mystery at the core of the story isn’t especially deep, you can still follow it along just fine and even be surprised by one or two elements that emerge. You enjoy being in the main character’s company – partly because half the time she is making sure you are in her company – and you’re having a good time with the journey she’s taking you on, which makes it a decent start to hopefully more adventures with this person. If you’re eager for a more traditional take on Sherlock Holmes which perhaps takes a few more risks, watch any episode of the Benedict Cumberbatch version, but if you’re much more attracted to the idea of a fun family-friendly adventure set in the same world as the super-sleuth, albeit with a slight lack of subtlety, then you don’t need to be a detective to deduce that Enola Holmes is perhaps your safest bet.

Enola Holmes is a fun, charming and entertaining new spin on the Sherlock Holmes mythos, which its star and producer Millie Bobby Brown injects a great amount of charisma and sweetness into which ensure a good time for the whole family, even if the film itself lacks a truly deep mystery worthy of its namesake, or a degree of subtlety when it comes to its well-intentioned but honed-in message of feminism.

Want to decide what the movie’s like for yourself?
Check out Enola Holmes streaming links
via