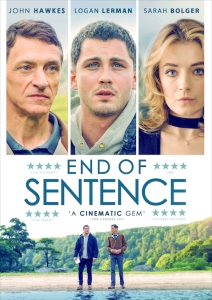 BASICALLY…: A widowed father (Hawkes) and his estranged convict son (Lerman) travel to Ireland for a meaningful adventure…

A film like End of Sentence solely exists to watch on a quiet, lazy Sunday afternoon with your family, as easy and mostly inoffensive viewing that you can do at the same time as your ironing, or simply with a glass of gin in your hand.

If that sounds like a knock against the movie, that’s really not the intention; while it is perhaps a rather safe film, End of Sentence just happens to be quite good at it, delivering some solid performances and earnest crowd-pleasing drama that makes for a satisfying watch.

We start the film, directed by Elfar Adalsteins in his feature debut, as dying mother Anna (Andrea Irvine), accompanied by her caring husband Frank (John Hawkes), visits the local Alabama prison to say goodbye to their adult son Sean (Logan Lerman), who is doing time for car theft. Some time later, Frank is left alone after Anna’s funeral, her remains contained in an urn, and upon Sean’s release from prison Frank persuades his estranged son to accompany him to Ireland and scatter the ashes at a remote lake, as was her final wish. Sean, who wants nothing to do with his father, is eager to migrate to California, and only agrees to the Ireland trip as long as he is given the resources to head there in exchange for his cooperation. Soon, father and son are headed on a trip across the vast Irish countryside, accompanied by local young woman Jewel (Sarah Bolger) who has her own reasons for leaving her life behind, and the two inevitably begin to bond once more.

There isn’t a whole lot that sets End of Sentence apart from other road trip movies like this – you do roughly know how certain things are going to end up, and whether or not father and son can find it within them to put aside their differences once and for all – but it still has plenty of heart to it which certainly gives it slightly more of a reason for being. The performances are so strong that they do manage to elevate the swift material; John Hawkes is very likeable in this movie, and while Logan Lerman is playing a much hardened character by comparison to Hawkes’ much more timid persona (with a temper that honestly makes him very difficult to empathise with, especially when he does things that would make any other character like this irredeemable in the eyes of the audience), he also delivers one of his more powerful turns in recent years. Their scenes together do have real emotional weight to them, because you do see through the actors’ facial expressions and some choice moments of “show, don’t tell” explorations of some of their backstories, that these are two people that clearly have their own issues and are trying to fix the one relationship each of them has left.

It is a movie that sets itself a somewhat consistent feel-good tone throughout, and director Elfar Adalsteins does well to keep you engaged in these characters and their slight misadventures throughout Ireland – which, by the way, is utilised far more realistically than it was in Wild Mountain Thyme – but End of Sentence is ultimately a film that, no matter how much it wins you over in the moment, will likely fade from your memory shortly after. It’s definitely a good movie with plenty of heart, even with its odd narrative choices – the reveal of one character’s true intentions come out of nowhere just to add unnecessary conflict, and also really feels out of character for this person by that point – but because there isn’t a whole lot about this particular plot that’s unique or done in a truly original fashion, it’s probable that you’ll forget you even saw it, only to scroll through the TV channels one day in the future and see this playing, triggering memories that you did indeed already see it and were pleasantly satisfied with it.

Again, that’s not a knock against this otherwise decent movie; it’s just that it’s fine in the moment, but don’t expect it to become a new classic or anything.

End of Sentence is a heart-felt and well-acted drama that gives off some decent crowd-pleasing vibes, though it doesn’t do a lot of original stuff with its traditional road trip narrative.

End of Sentence is now available to rent or buy on digital platforms, including Amazon Prime Video.