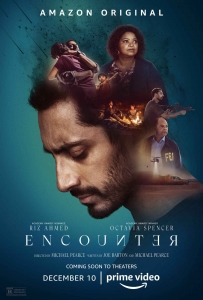 BASICALLY…: A former Marine (Ahmed) tries to protect his sons from an oncoming alien invasion…

Mark this moment, folks, because Riz Ahmed is going to become one of the world’s biggest stars one day. He’s already impressed in several films, be they big blockbusters like Rogue One: A Star Wars Story or Venom, or smaller independent fare like Mogul Mowgli and especially Sound of Metal, which earned him his first (and the first of many to come) Oscar nomination for Best Actor, but very soon he is going to rise even further up the ranks to the point where his name will be synonymous with Leonardo DiCaprio, George Clooney or Brad Pitt as one of Hollywood’s most sought-after players.

You want to know why I’m suddenly gushing over this guy? Because he makes his case for stardom more than clear in Encounter, a thrilling psychological sci-fi tale which is already a pretty good movie from a narrative and directorial perspective, but is made even better because Ahmed’s lead performance is something truly special here.

Ahmed plays Malik Khan, a former Marine who has since been discharged from duty, and who we first meet making plans in a shoddy motel room while constantly spraying himself and the roach-infested walls with bug spray. As it turns out, Malik has apparently uncovered evidence that an alien parasitic force has arrived on Earth, and has infected the planet’s insects who in turn are infecting humans with the parasites, allowing them to assume control of people’s minds and bodies like in Invasion of the Body Snatchers. Malik’s primary mission, however, is to save his two young sons Jay (Lucian-River Chauhan) and Bobby (Aditya Geddada) from their mother (Janina Gavankar) who he believes has been infected by the aliens, and so he comes by in the middle of the night to whisk his boys away on a trip towards “base” in the Nevada desert.

Except, as we eventually learn, the aliens aren’t the actual threat – in fact, there might not even be any aliens at all, since director and co-writer Michael Pearce – who previously directed British indie breakout Beast – introduces a strong psychological element to this gritty sci-fi tale not too long after Malik and his boys hit the road. In an ingenious, if slightly predictable, development that immediately changes everything, we are suddenly uncertain whether or not to trust Malik’s overall intentions, because up to and beyond this point he has been nothing short of a loving and good-natured father, joking around with his kids and keeping them safe from the usual dangers that a parent would normally do, albeit under slightly more intense circumstances here. However, we start to see uglier sides of him like his frequent outbursts caused by his short-fused temper, which have us questioning if he has much more sinister things lined up for his young boys, who have been thrust on this cross-country trip with their dad without so much as a toothbrush, and are starting to doubt if they can believe everything their father is telling them. It’s a tight and well thought-out script by Pearce and co-writer Joe Barton, which relies on the strong hook of an unreliable protagonist without forgetting to make the story and the overall character arcs palatable for the audience.

However, it really is Riz Ahmed who makes Encounter work as well as it does, with an absolutely stunning lead performance that you simply cannot take your eyes off of. As in Sound of Metal, Ahmed displays unfathomable strength in finding the raw humanity in a severely flawed lead character, giving his Malik a strong sense of charisma to hide some of his biggest demons, and always letting us understand this person’s mindset even at its most unreliable. You can absolutely feel this guy’s dedication to his kids, however misguided it may be, because the chemistry between him and excellent young actors Lucian-River Chauhan and Aditya Geddada is exceptionally strong, almost like you’re watching a real father-children bond play out in real time. However, when his darker side begins to show, Ahmed doesn’t hold back when he’s screaming at his kids (causing one to understandably wet themselves), or seriously throwing down in scenes where he does seem extremely intimidating, even when going up against some vengeful right-wing militants who look like they’ve just come directly from storming the US Capitol. It’s a multi-layered performance which really does position Riz Ahmed as one of today’s finest actors, and like I said don’t be so surprised to see his name be as widely known as some of Hollywood’s biggest A-listers.

The movie overall is a good, emotional ride that thoroughly holds your attention and keeps things going at a pace that is both entertaining and engaging, but ultimately Encounter isn’t perfect. The film works best when we’re solely with Malik and his boys, but we will also be cutting back and forth between FBI agents who are trying to locate them, as well as a parole officer played by Octavia Spencer who had previously overseen Malik’s progress. Spencer is good in the movie (honestly, she rarely isn’t), but her scenes as well as those with the FBI are mainly there just to provide necessary exposition, and nothing more. Honestly, you could remove their scenes entirely and leave the film with a greater sense of ambiguity surrounding Malik’s central mission, even though the knowledge these scenes gives us is crucial to the core storytelling. Regardless, these scenes could easily have been trimmed down at the very least, or not be so shoehorned into a climax that unfortunately, for a movie that was already doing so well with bucking certain conventions, feels much more like a Hollywood ending than a much more logical endpoint for this story.

Even when the film isn’t entirely working, though, there are still plenty of good things to carry it, like the high quality of filmmaking that Pearce brings behind the camera from strong cinematography to careful sound editing, and – once again – the performances which are truly, to use an overdone yet still appropriate phrase, out of this world. Despite its faults, you can easily watch Encounter and enjoy the experience, especially knowing that by taking the time to sit down and put it in your eyeballs, you are helping Riz Ahmed become the next big Hollywood movie star.

Encounter is a strong slice of gritty sci-fi which director Michael Pearce brings an intense psychological twist to, which despite some unnecessary clutter here and there works well enough to build a solid narrative around, especially thanks to the incredible lead performance of Riz Ahmed who is on his way to becoming one of our greatest living actors.

It will be available to stream exclusively on Amazon Prime Video from Friday 10th December 2021.